Marois Construction Builds on Its Relationships 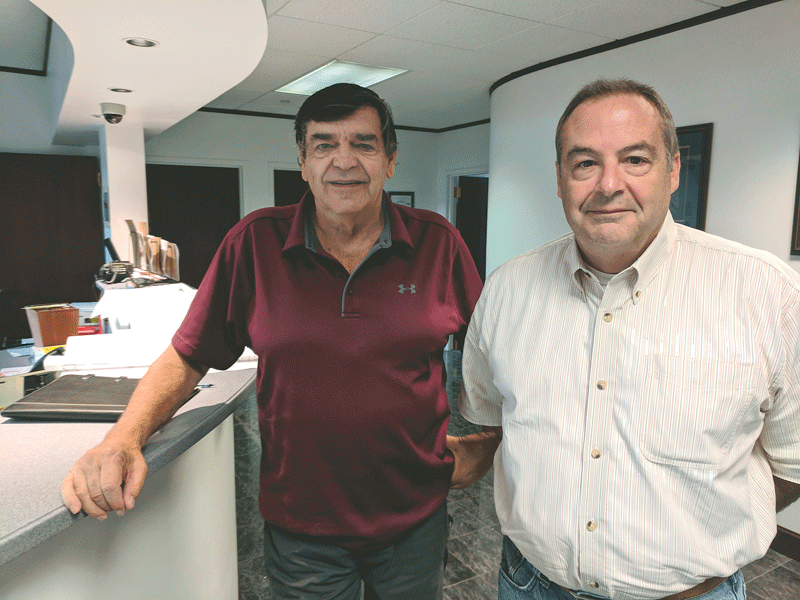 A construction company doesn’t grow and thrive for almost a half-century — through some dramatic economic ups and downs — without the kind of client loyalty that makes it a go-to option for any number of job types. For Marois Construction, those include educational facilities, public buildings, medical offices, bank branches, and more. The firm has certainly left its mark on the Valley — with no signs of slowing down.

There are advantages to being in business for 45 years. One is that it’s plenty of time to build a reputation.

“People are looking for quality work — people they know they can trust,” said Joe Marois, president of Marois Construction in South Hadley, a business he built from the ground up — literally and figuratively — starting in 1972. “We’ve established that trust. We’ve made a lot of friends on our projects.”

A lot of friends means plenty of repeat business, and that has been a key component of the success of one of the region’s iconic names in construction, an entity that quickly grew beyond its roots building cabinets and restoring furniture from a small shed. Five years after that humble beginning, Marois boasted seven employees and five trucks. Today, headquartered in a large building on Old Lyman Road, the company currently employs about 45 people.

SEE: General Contractors in the Region

The repeat business has long been buoyed by the firm’s close relationships with area colleges and universities and expertise in niches as diverse as bank branches and medical offices. Current projects have the company busy at UMass Amherst, Elms College, a new Polish National Credit Union branch in Chicopee, the new state office building in Springfield, Veterans Memorial Cemetery in Agawam, and Central High School in Springfield, to put up a new press box and scoreboard.

The company also has a standing contract with the city of Springfield to perform needed maintenance and renovation jobs on public schools. “We’re all over the place there,” Marois said. “We never know what the needs will be.”

Carl Mercieri, Marois’ long-time vice president, said those assignments can be for just about anything. “They’re more maintenance-type things, on-call services, everything from changing a window to replacing ceilings in the classrooms over the summer, or repair old plaster. It’s pretty interesting. It’s more service work, but it’s good for the guys; they go to a job for two or three days, then move on to another for some change of scenery.” 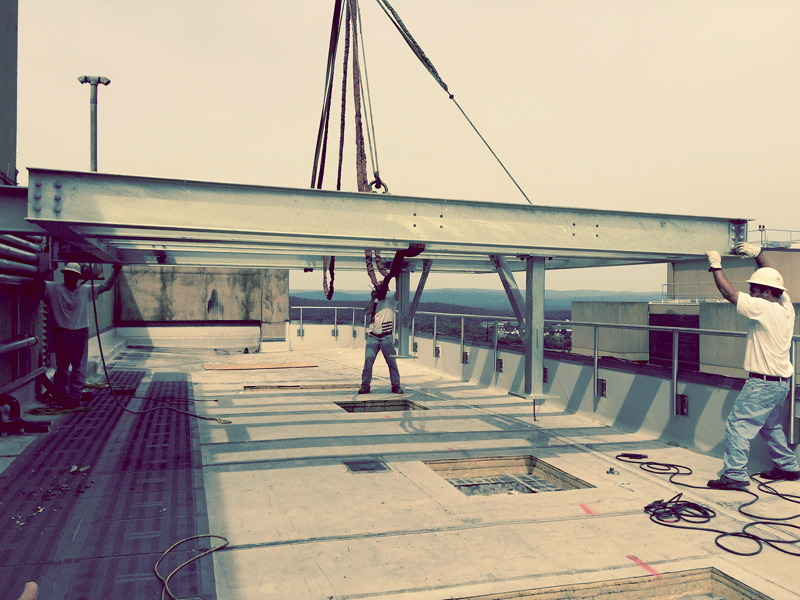 In short, times are better for Marois — and for the industry as a whole, of course — than they were a few years ago, in the shadow of the Great Recession, when all firms were scrambling just to keep their crews reasonably busy.

“We were really coming off a bad time during the recession, where it was all about survival,” Marois said. “A few of our contemporaries did not make it. It was a culling of the industry, I guess you’d say. And it was further complicated by an influx of outside contractors into our area from New York and Boston; they were hungry too. Right now, we’re turning the corner and staying busy.”

A quick rundown of some of the firm’s recent project reflects its diversity. To wit:

• An upgrade of the electrical and fire-pump systems at John Adams Hall at UMass, a residential tower, included installation of twin emergency generators on the roof of the 22-story building, placed on a new structural steel frame.

• Also at UMass, a renovation of the Amherst Student Affairs Suite in the Whitmore Administration Building included the demolition of a 4,000-square-foot space, rebuilding of interior partitions, and finishes including porcelain tile flooring, recessed light fixtures, and a bamboo slat ceiling.

• A project at Veritas Preparatory Charter School included more than 22,000 square feet of demolition and renovated spaces, including new classrooms, a science lab, a music room, a reception area, and office space.

• On the medical side, the Raymond Center at Baystate Health – South Hadley Adult Medicine consisted of developing 14,000 square feet of primary-care space within an existing building.

• At the Lee Hutt Gallery at the Yiddish Book Center in Amherst, the existing building was converted into a working sculpture studio, as Marois worked closely with the owner on all aspects of the design-build project.

• Marois also designed and constructed a facility to house supplies and equipment required to maintain the runways and grounds at Westover Air Reserve Base in Chicopee. These cupolas are being designed for a project in Amherst.

The jobs are still coming, but a new obstacle looms, he said. “Now we’re being faced with a labor shortage, which is always a challenge. That’s the nature of construction — it’s never perfect. I don’t know to what extent the casino is affecting that, but basically, the labor pool for tradespeople is very small.”

National data bear that challenge out. According to the Associated General Contractors of America, construction employment increased by 28,000 jobs in August, yet contractors still face a lack of experienced workers. Association officials say construction job growth would have been even higher had a majority of firms not reported having a hard time finding qualified staff.

“Construction firms have stayed busy, adding employees in the past year at nearly twice the rate of employers throughout the economy, but more than two-thirds of contractors report difficulty finding craft workers as the number of unemployed, experienced construction workers hit a 17-year low in August,” said Ken Simonson, the association’s chief economist. “Although construction spending has fluctuated recently, many contractors are still looking for qualified craft workers and project managers.”

More than half of the survey’s respondents said they were having trouble finding carpenters, bricklayers, electricians, concrete workers, or plumbers, while some salaried positions, such as project managers and supervisors, are also hard to fill, Simonson added, noting that federal, state, and local leaders should act on measures aimed at recruiting and preparing more young adults for high-paying construction careers. “Exposing students to construction as a career path will encourage more of them to pursue these high-paying careers,” said Stephen Sandherr, the association’s CEO.

Marois would welcome that development. “I just don’t see a lot of evidence of new tradespeople or young people who are enthusiastic about learning a trade.”

Marois and Mercieri have an old-school ethos when it comes to quality work, but recognize that the way jobs are processed today is different than it used to be.

“It has gotten to be technically advanced as far as the computer systems we are using at the insistence, many times, of our clients,” Marois said. “For a dinosaur like me, that’s a challenge.”

Added Mercieri, “sometimes we run into a situation where a project requires specific software, either scheduling or reporting, and some are good, some are bad. It takes away from the normal, day-to-day business, and it’s something we do more to satisfy others than ourselves.”

Green building, however, is a building trend that has grown well past trendiness in recent years; instead, it’s standard operating procedure for many clients. Marois has worked on multiple LEED-certified structures, but even those that don’t reach for those goals are subject to a new world of sustainability.

“There are always new heating and cooling standards, new insulation values on buildings — seismic standards are another thing that’s a great concern for people — to the detriment of renovating older facilities that are non-correctable, for lack of a better word,” Marois said. “With these 100-year-old mill buildings they want to converting to loft apartments, none comply with the basic structural requirements in place today, and they either get variances on them, or it’s not affordable, with the money it takes to bring it to the standard they expect.”

The business has changed in other ways, too, such as Marois’ increased reliance on outsourcing some of the framing and demolition work than in the past, but he’s still keeping his crews active, after 45 years of loyal clients, technological advances, and economic ups and downs.

“I couldn’t even count how many repeat customers we have,” Mercieri said. “The past 18 months have been busier than we’ve been in a long time.”