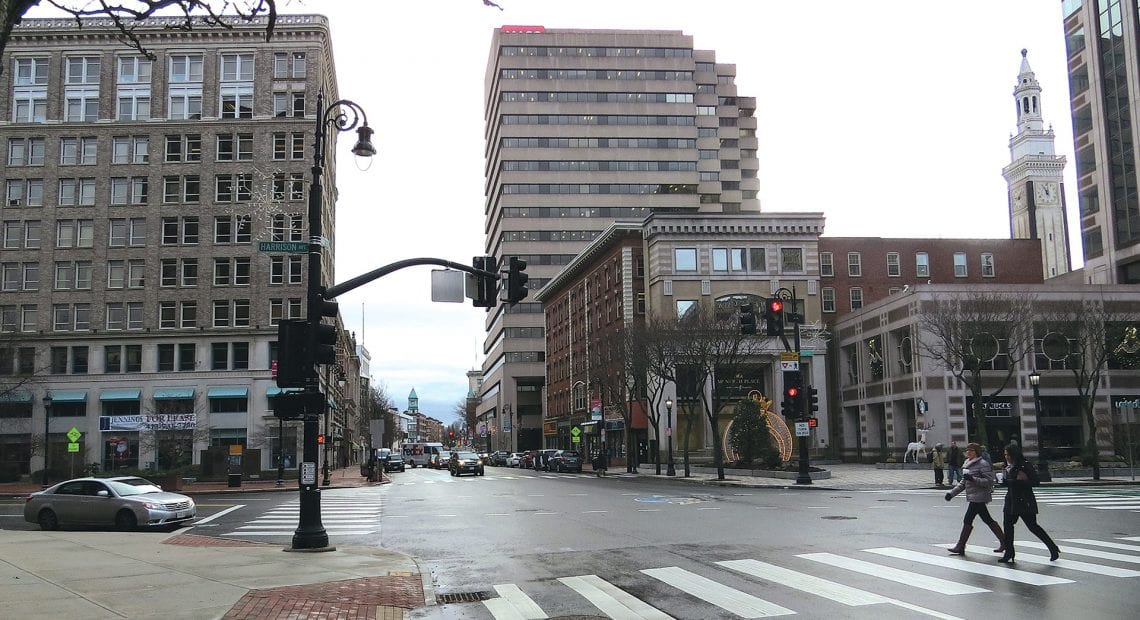 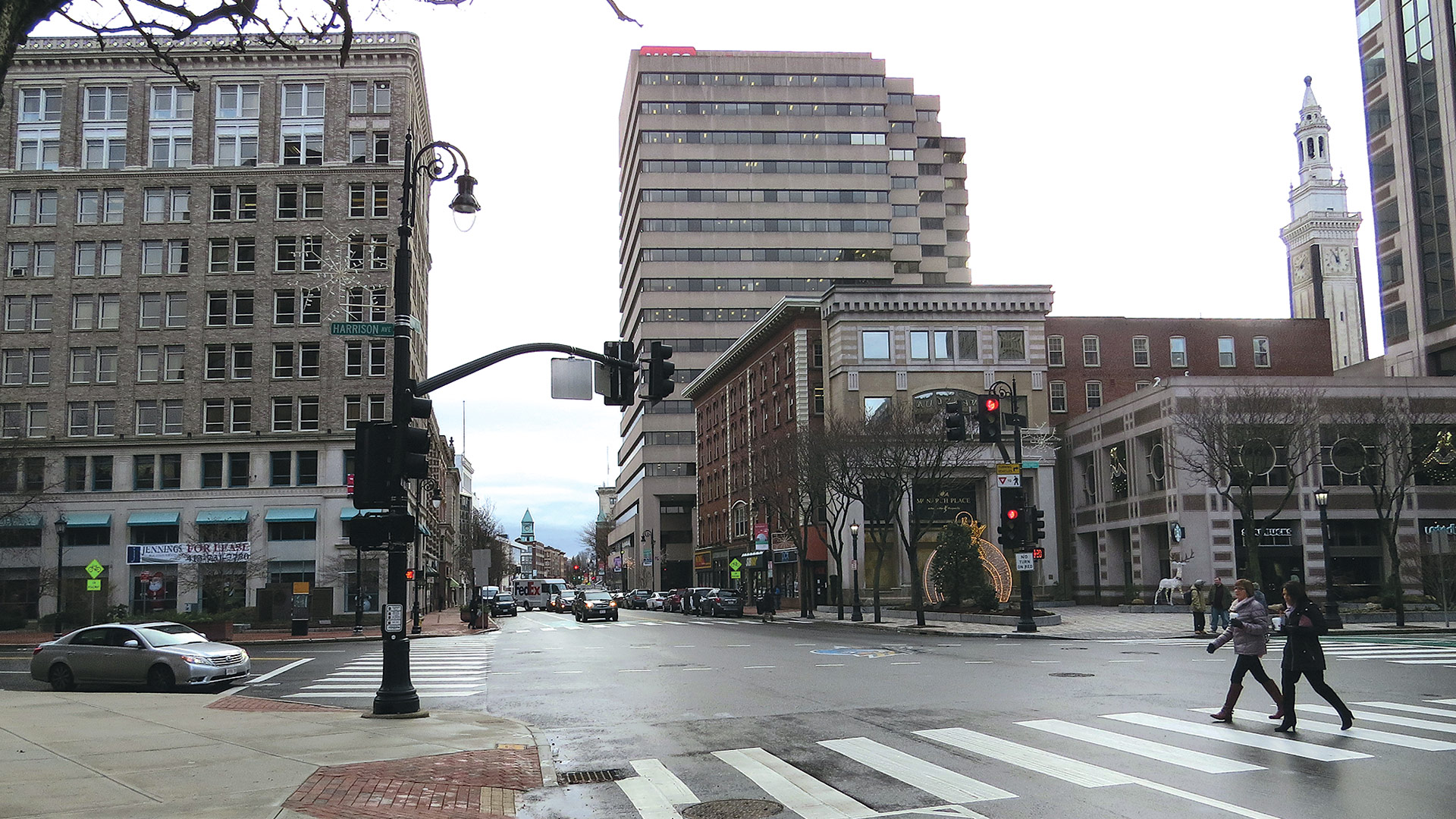 A confluence of factors — from the opening of MGM Springfield to the dawn of the cannabis era in Massachusetts — have fueled heightened interest in real estate in downtown Springfield. Brokers report that the level of activity — inquiries, showings, leases, and sales — is the highest they’ve seen in recent memory.

Freddy Lopez Jr. says there’s a rather complex algorithm, as he called it, when it comes to locating a cannabis dispensary in Springfield.

Such a facility can’t be within 500 feet of a school, he noted. Or within 300 of another dispensary. Or within 50 feet of a Class A residence. And there are many other restrictions, as well as a host of hurdles to clear locally and with the state, just to get the doors open.

But this rather high degree of difficulty doesn’t seem to be stopping many people from trying to get in the game in downtown Springfield — and at other locations within the city, said Lopez, a broker with Springfield-based NAI Plotkin.

He said he’s lost count when it comes to how many properties he’s shown to various parties, and noted that the interest is constant and only increasing, as desire to be part of the cannabis wave, if you will, intensifies.

“There’s a lot of interest across the area, but the hot spots are downtown, and especially locations near the casino,” said Lopez, who recently brokered the sale of 1665 Main St., once the headquarters of Hampden Bank, to a party (RLTY Development Springfield LLC) interested in converting it into a dispensary. “There’s a lot of competition for good sites.” 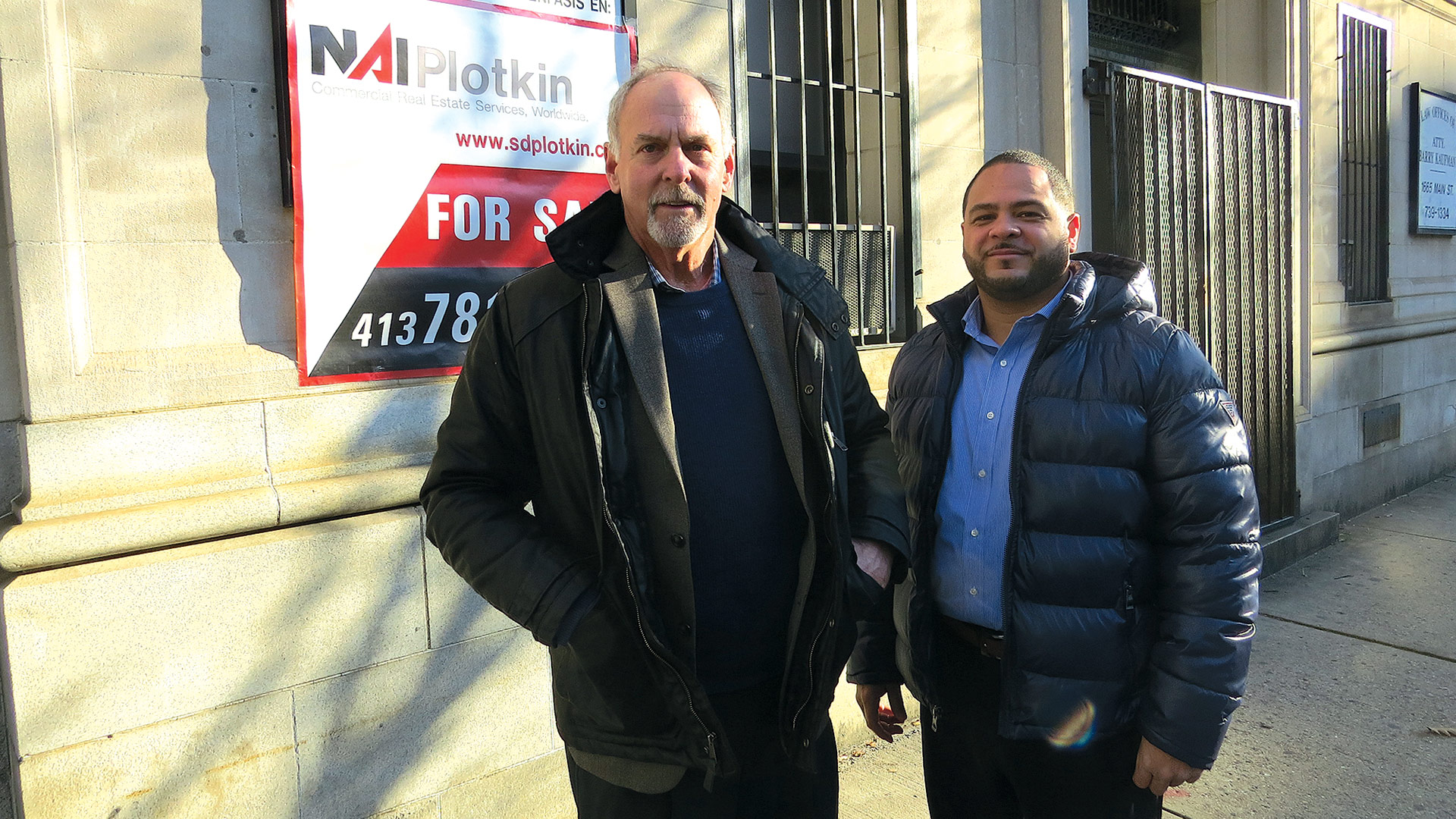 1665 Main St., recently sold to a party interested in converting it into a cannabis dispensary. Evan Plotkin, left, and Freddy Lopez Jr. of NAI Plotkin, which brokered the sale.

The Main Street property, located across from the Hippodrome and a block from Union Station, was most recently assessed at $127,600, but sold for $285,000, a clear sign of the times and an indicator of how hot the race to secure locations for cannabis facilities can, and probably will, become.

“People are jockeying for position right now,” said Lopez, adding that some parties are securing options, some are leasing, and others, like RLTY, are going ahead and buying properties in anticipation of winning a coveted license.

But the cannabis industry is only part of the story when it comes to growing interest in Springfield and especially its downtown, said Mitch Bolotin, a principal with Colebook Realty, based in the heart of downtown.

MGM Springfield has certainly had an impact as well, spurring interest in various forms of development, from retail to housing. But there have been many other positive developments as well, from the relocation of the Community Foundation of Western Mass. to a location on Bridge Street, to the renovation of Stearns Square, to an improved outlook on the part of many when it comes to public safety.

“There are a number of factors driving this,” said Bolotin late on a Friday afternoon after a day of showing various properties, referring to a surge in interest and activity in Springfield and its downtown. “I’ve been doing this for more than 30 years now, and this is the strongest I’ve ever seen it.” 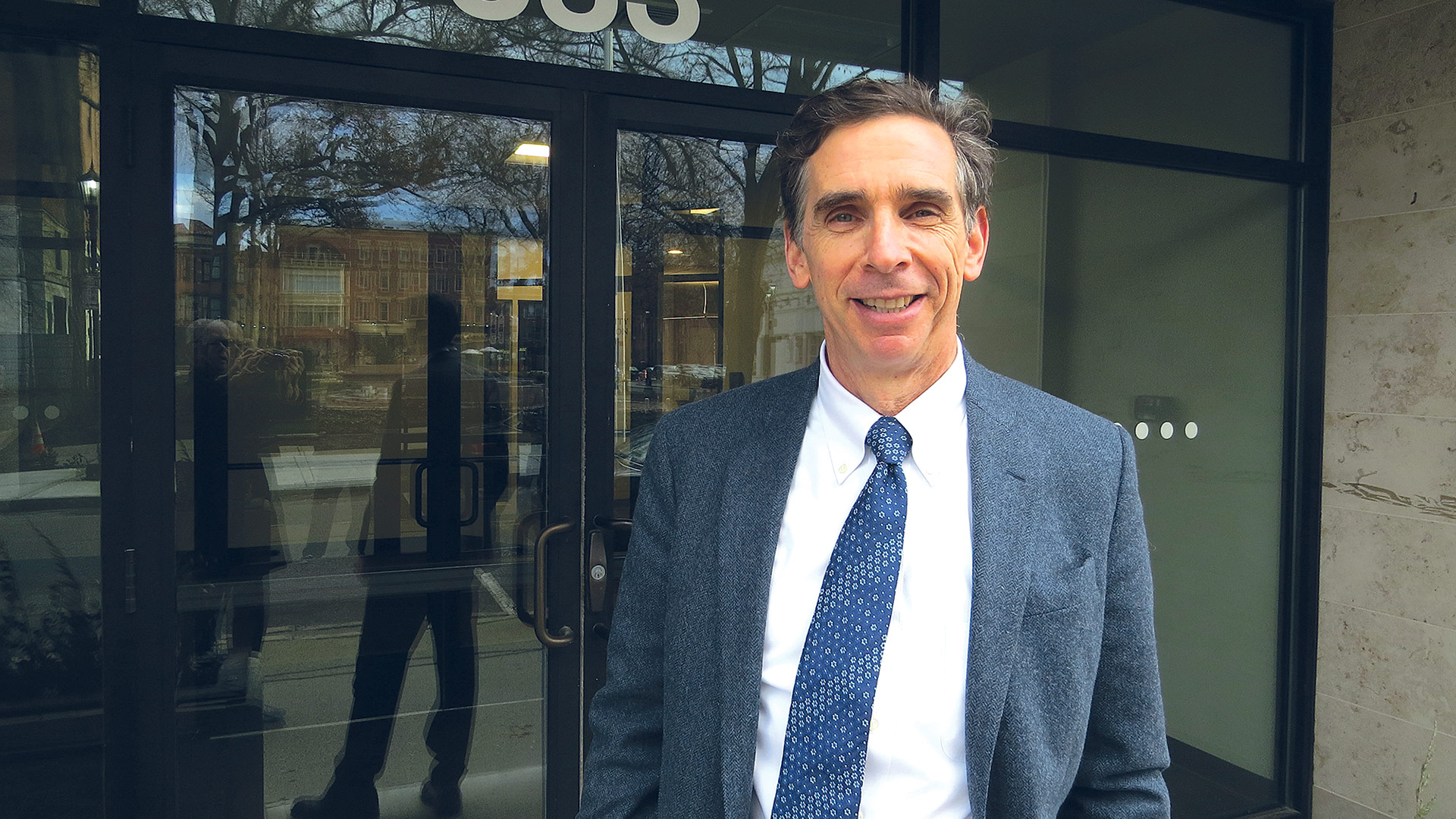 Mitch Bolotin says MGM Springfield is just one of many factors stimulating the most activity seen in the downtown Springfield market in recent memory.

Demetrius Panteleakis expressed similar sentiments. The president of Macmillan Group LLC, now based in Tower Square, said the last quarter of this year has been extremely busy, and he expects that pattern to continue.

“I haven’t seen an October-November-December period as busy as this one — this is usually a slower time,” he noted. “There is a lot of movement; things are very robust right now.”

For this issue and its focus on commercial real estate, BusinessWest looks at why things are heating up in the downtown market and what this warming trend means for 2019 and beyond.

Lopez said he has a number of anecdotes that capture the soaring level of interest in Springfield and its impact on the real-estate market.

One of his favorites concerns a party calling to inquire about securing a luxury apartment in downtown Springfield. Lopez explained that the city doesn’t really have any of those, much to the disappointment of the caller.

“This person was looking to do some investing in Springfield, and I think he wanted to use this apartment as a base — he could meet people there,” Lopez explained, adding that this phone call, all by itself, speaks volumes about how the commercial real-estate market is heating up in the city, and also how widespread the interest is.

Indeed, while there are many local parties interested in investment and/or development opportunities, the callers and visitors are also coming from well outside the 413.

“We’re getting calls from developers and investors in Boston, Rhode Island, New York City, and beyond,” he said, noting that many of these calls involve potential housing developments. “People who have never set foot in Springfield now have an interest in the city, and that’s very encouraging.”

That interest comes in many flavors, said those we spoke with, adding that the cannabis industry, and a strong desire to join it, are sparking many of the inquiries.

But these robust times are manifesting themselves in many ways.

Bolotin noted that he recently secured a lease for a new food-service business on Bridge Street. He couldn’t give specifics, but said the deal involved one of the vacant storefronts on that street, damaged first by the natural-gas blast and later by explosions triggered by a water-main break.

It’s an example of the strong interest in the market that he noted earlier, arguably the most activity he’s seen in recent memory.

“We’re seeing a lot of positive signs in the marketplace in terms of activity and interest, leases, and sales,” he said, adding that this vibrancy is reflected in everything from higher occupancy rates in the buildings managed by Colebrook — and there are many in the downtown, including the TD Bank Center and the Fuller Block — to how many showings of properties he’s conducted in recent months.

Overall, Bolotin, like others we spoke with about this, said there is considerably more positive energy concerning the downtown than there has been in some time. MGM deserves some credit for this, he noted, but there are many other factors as well, from the developments on and around Bridge Street to the renovation of the Fuller Block, to less apprehension about public safety. “The attitude is much more positive than it’s ever been.” 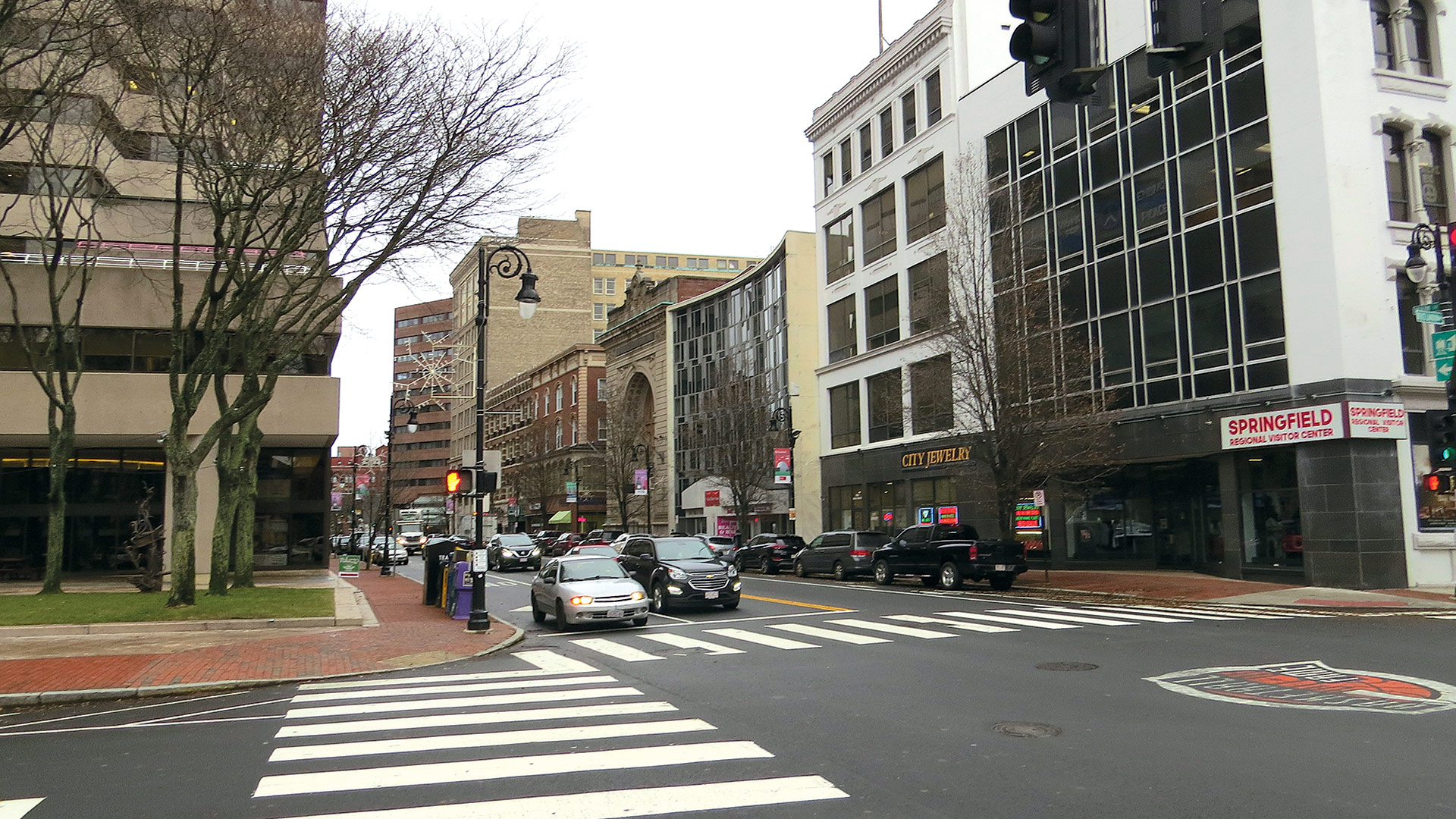 He noted that Patricia Canavan, president of United Personnel, who moved her business onto Bridge Street, Katie Alan Zobel, who relocated the Community Foundation to that same area, Tom Dennis, owner of the Dennis Group, who purchased and renovated the Fuller Block, among other buildings downtown, and Martin Miller, general manager of WFCR, who moved his operation from Amherst into the Fuller Block, are all examples of people investing in the downtown, and through, their actions, inspiring others to do so.

Panteleakis has also seen considerable optimism and less apprehension about public safety. “You don’t hear as many concerns about safety,” he said. “Before, safety was a real issue — it kept some people from coming downtown. But you don’t hear that much anymore.”

Meanwhile, housing has become a huge area of interest, in part because of MGM and the needs of its huge workforce, but also because of rising activity levels in general and growing anticipation that the city will soon become, if it isn’t already, a landing spot for younger people and empty-nesters alike.

Evan Plotkin, a principal with NAI Plotkin and long-time champion of downtown Springfield, noted the purchase of the former Willys-Overland building in the so-called ‘blast zone’ by Boston-based Davenport Advisors LLC, and that company’s acquisition of the old Registry of Motor Vehicles site, possibly for the same use, as harbingers of things to come.

“I’m seeing a lot of developers coming in looking to develop residential,” he said. “I see tremendous potential for new developments in parts of our city that have been stagnant for a long time, including areas on the fringes of downtown and in the downtown itself.”

While interest in potential housing development grows, the cannabis industry is the source of much of the activity downtown.

The brokers we spoke with said they’ve been showing multiple sites to groups interested in all facets of this business, from cultivation to retail. And while sites across the city are being explored — as many as 15 sites might become licensed in Springfield — the downtown is becoming the focal point.

“Things have been crazy for the past two years when it comes to this business,” he said, adding that he’s brokered the sale of sites for marijuana-related businesses in Holyoke and Easthampton. “Now, the focus is shifting to Springfield and the downtown area; people are trying to line up sites.”

Lopez concurred, noting that there is a broad mix of local, national, and even international companies looking to start a cannabis dispensary or cultivation site in this region, with many focused on Springfield and an initiative known as the Opportunity Zone Program.

Created as part of the U.S. Tax Cut and Jobs Act of 2017, the program provides incentives for investment in low-income communities, like Springfield. Individuals and groups looking to develop in these designated geographic areas can gain favorable tax treatment on their capital gains, said Lopez, adding that he has worked with several owners and investors in the city’s Opportunity Zone.

The purchase of 1665 Main St. falls into this category, he said, noting that the acquisition is a good example of investors jockeying for position through options, leases, or outright purchases.

And the race for cannabis locations should provide a substantial boost for owners of properties downtown, said Plotkin, noting that prices are moving higher as interest grows, in a movement that echoes what happened when MGM Springfield and other casino-industry players jockeyed to enter this market. 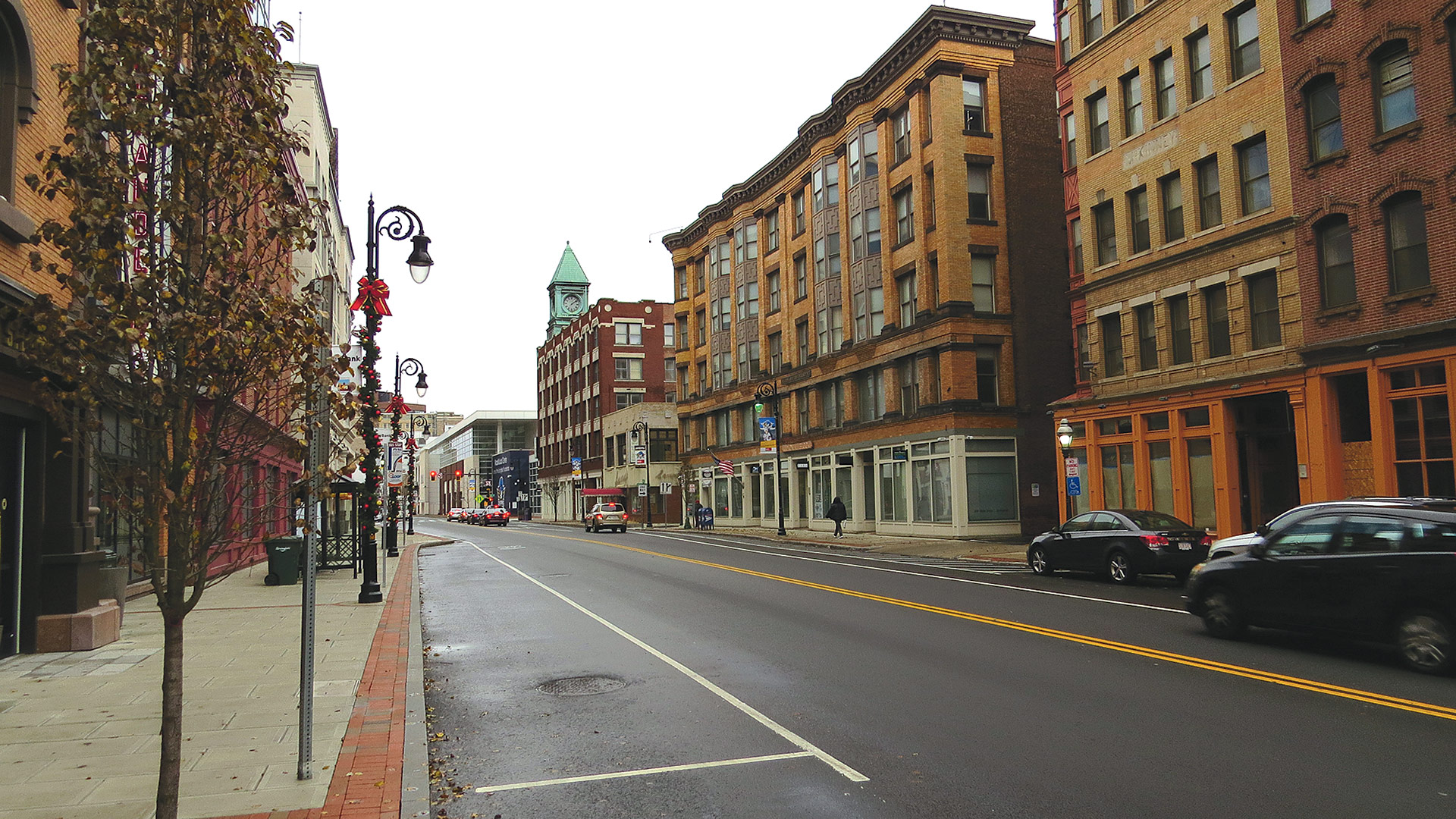 “When you were dealing with a casino developer, like MGM or the other parties interested in Springfield, there was what we all referred to as the ‘casino rate,’” he explained. “They’ll pay more for real estate than the average buyer will.

“In the case of a marijuana dispensary, because the business is so lucrative, they will pay a lot more rent per square foot,” he went on, noting that a ‘marijuana rate’ is taking shape. “Rents that may have been $15 a square foot a year ago … for a marijuana shop, we’re taking about $20 to $25 per square foot, and in some cases more, depending on where it is.”

As for what the cannabis industry might mean for Springfield, Plotkin, who has traveled extensively, expressed some hope that the city might someday become somewhat like Amsterdam, a city famous for its culture, nightlife, and countless shops selling marijuana, other drugs, and related paraphernalia.

“I think Amsterdam is a great example of just how the very liberal nature of that city has led to incredible street life in that town that’s very safe,” he said. “Amsterdam is a great city, one of the most vibrant cities in the world, and maybe we can learn from its example.”

Whether Springfield can become anything approaching Amsterdam — as a tourist destination or cannabis hotspot — remains to be seen.

For the time being, it is a hotspot when it comes to its commercial real-estate market.

There is interest and activity unlike anything that’s been seen in decades, and the consensus is that this pattern will likely continue and perhaps even intensify.

Springfield and its downtown have become the right place at the right time. 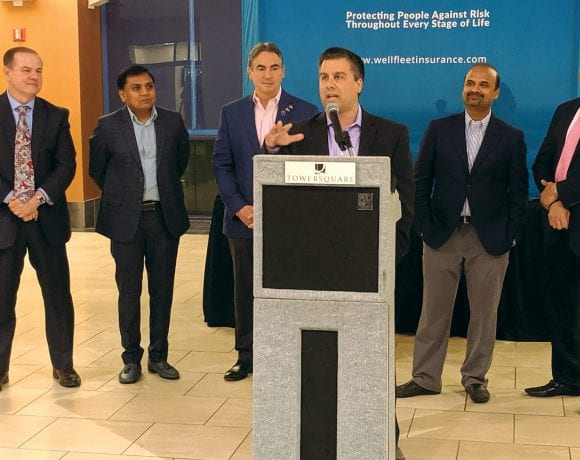