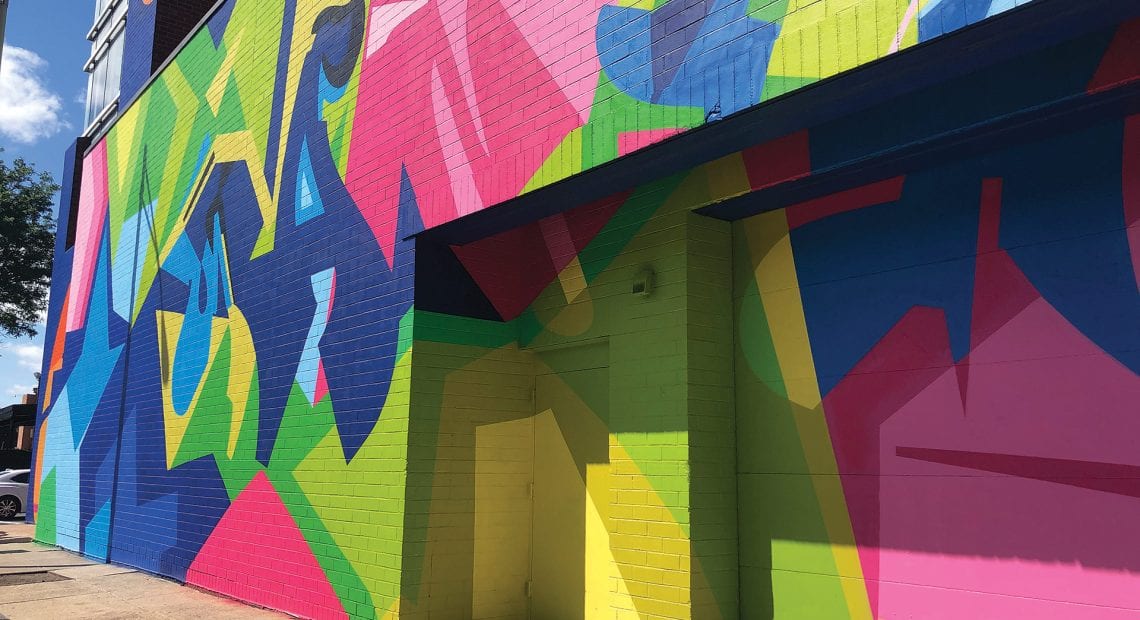 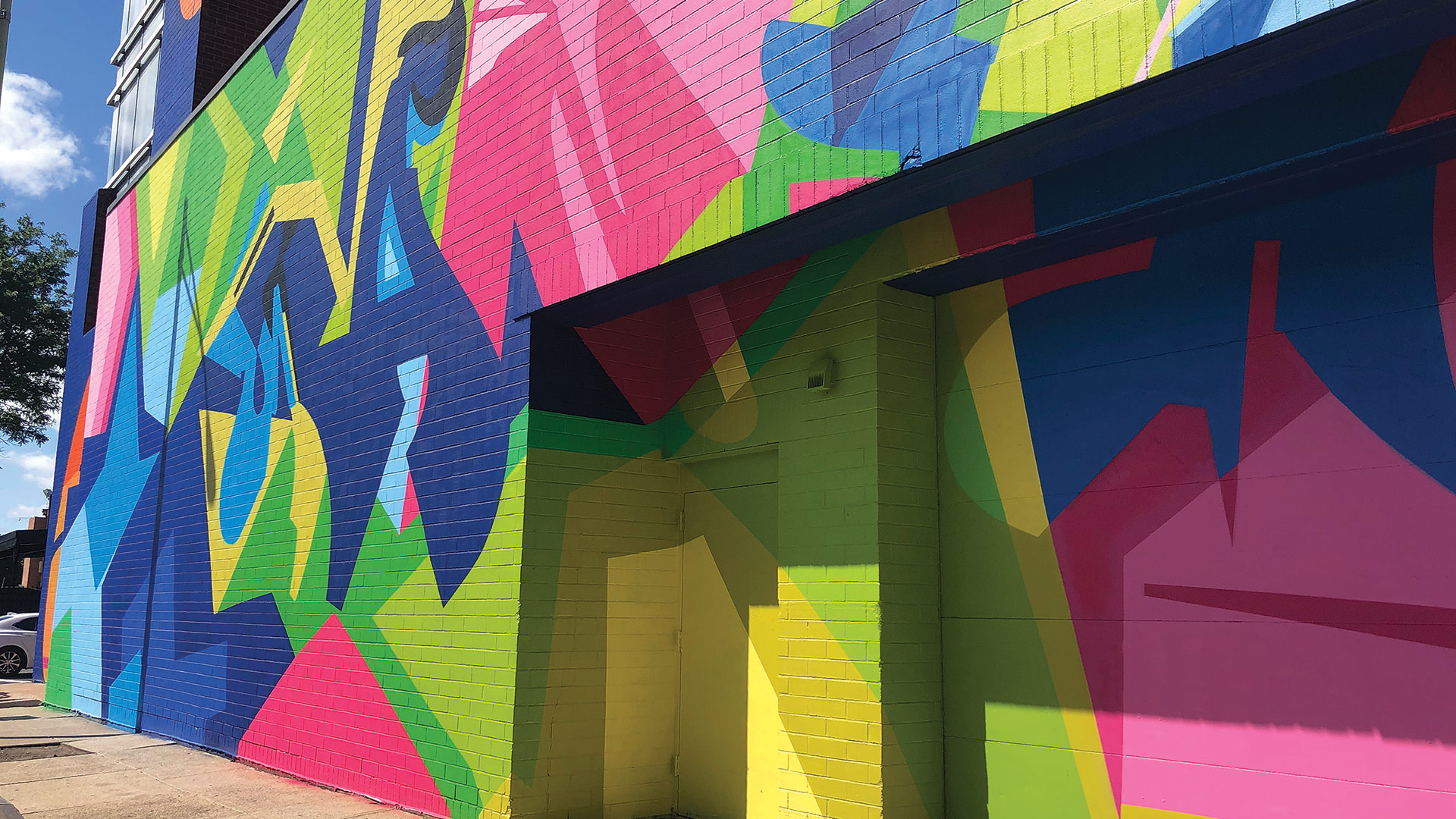 The East Columbus parking garage after being colorfully decorated by artist Wane One from the Bronx, N.Y. 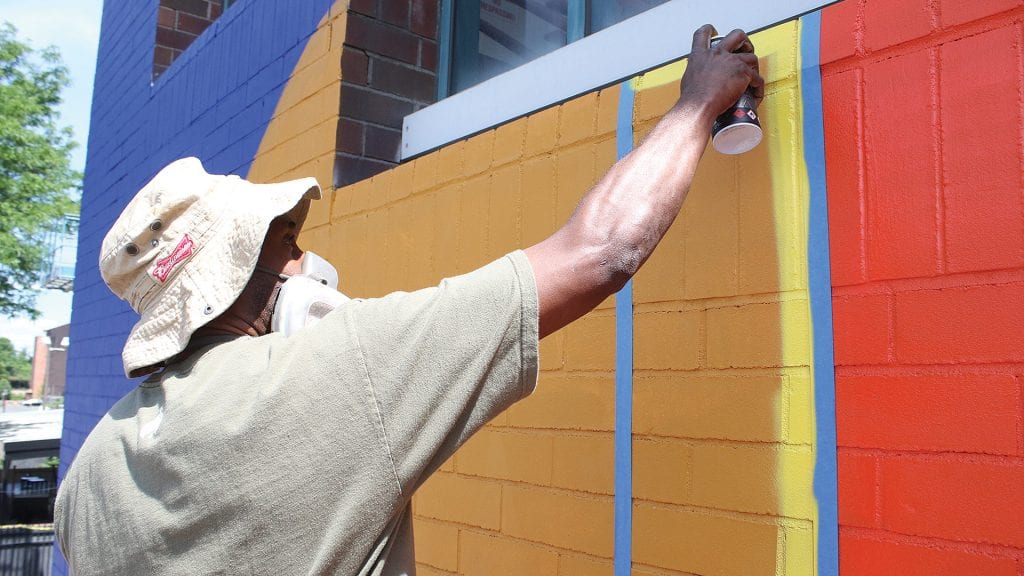 Artist Wane One from the Bronx, N.Y.

After attending what have come to be called ‘mural festivals’ in cities such as Worcester and Salem and seeing the many benefits they bring to those communities, she lobbied hard to bring a concept known as Fresh Paint to the City of Homes.

Wanting to find a way to give back to the community, Ruhe, a financial strategist for startups and small businesses by trade, began meeting with festival organizers in other parts of the state to gather input and essentially learn how it’s done.

“I was able to see firsthand what an incredible impact mural festivals have on revitalizing a neighborhood, and I thought, ‘Western Mass. needs something like this,’” said Ruhe, adding that, when she approached Springfield’s business, civic, and community leaders about staging a festival here, she encountered overwhelming support.

Indeed, not only did Kevin Kennedy, the city’s chief Development officer, agree to the festival concept, he pushed Ruhe to set the bar higher than her original proposal of five murals in order to achieve a greater impact.

Over six days earlier this month, 35 artists, with considerable help from the public during several ‘paint parties,’ transformed 10 walls throughout the city during Springfield’s first mural festival.

“It’s been a great success; when you do something in a city the size of Springfield, it has to have the correct impact,” said Kennedy. “I thought five was a little too small to be impactful. This was the first time we were going into multiple murals, and I thought 10 was more impactful than five.”

He said encouraging the arts and culture sector, currently a $50 million business in Springfield, is important for the continued revitalization of the city, especially in the realms of housing and entertainment.

The 28 total works of public art add up to 20,000 square feet of murals, and the larger works were approved by building owners who had no idea what the finished product would look like.

“I was able to see firsthand what an incredible impact mural festivals have on revitalizing a neighborhood, and I thought, ‘Western Mass. needs something like this.’”

“The building owners have the biggest lift; they donate their wall,” said Ruhe. “As part of a festival, the building owner doesn’t have to pay, but they don’t get to choose what goes on their wall, which is a big ask, especially this first year around.”

Overall, the festival was a community effort, with $150,000 raised for the event from donors and several sponsors, including MassMutual, MassDevelopment, Tower Square Hotel, and many others.

Dozens of volunteers took part, and 1,500 cans of spray paint and 500 gallons of liquid paint were used to change the face of many formerly drab buildings and pieces of infrastructure.

But the benefits far outweigh the costs, Ruhe told BusinessWest.

“There’s a lot of data out there that shows that murals increase property value, foot traffic, and they’re good for residential and commercial businesses,” she explained, adding that, although the economic benefits are difficult to quantify, a study is being undertaken to examine the direct effects such a festival has on a city.

While little of the funds raised go to the artists themselves, Kim Carlino, artist of the mural at 8-12 Stearns Square, said there are many other types of rewards, especially the pursuit of such a daunting challenge. 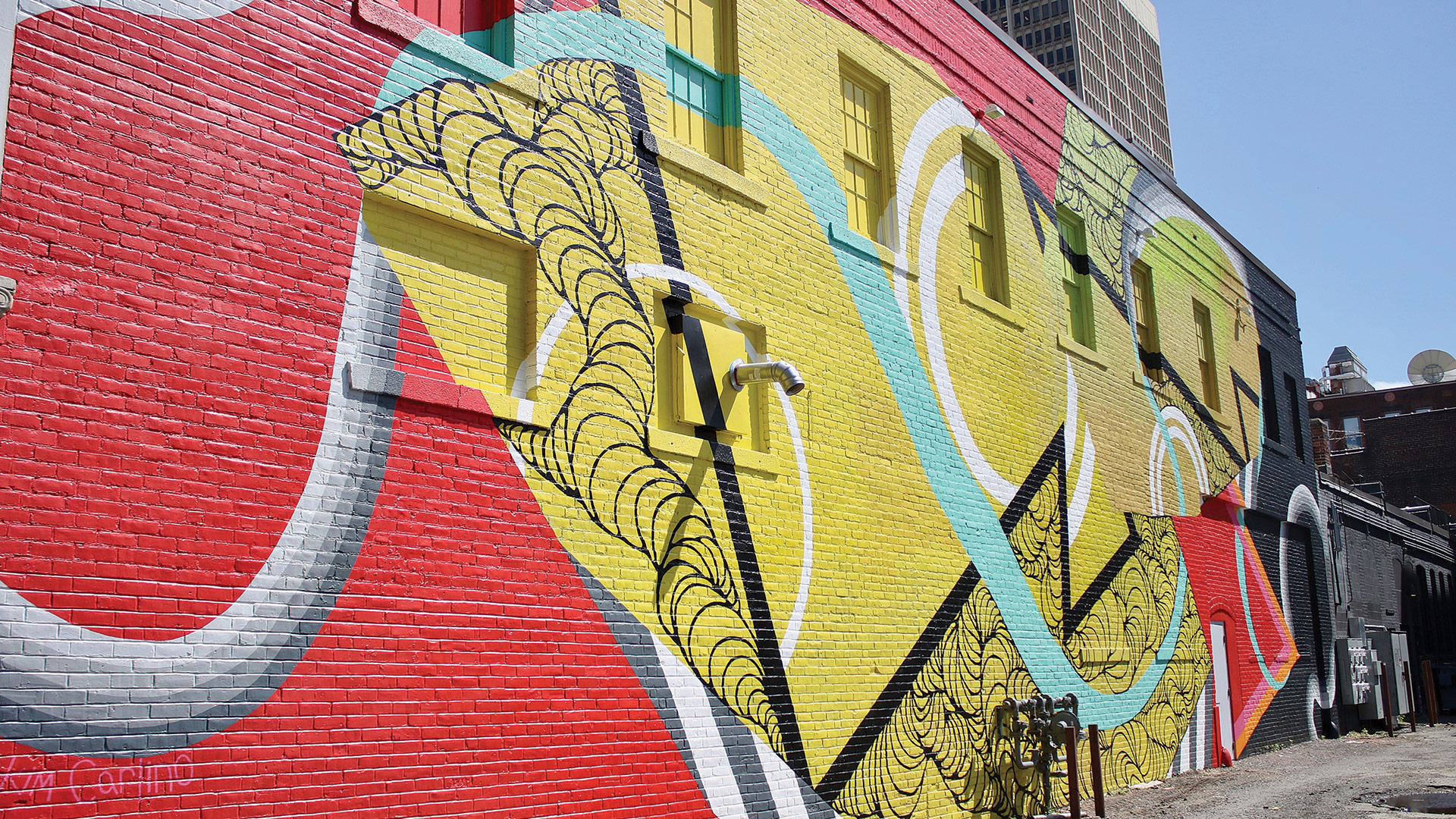 Kim Carlino’s mural at 8-12 Stearns Square is a product of her love for creating illusion and disillusion of space in abstract form. 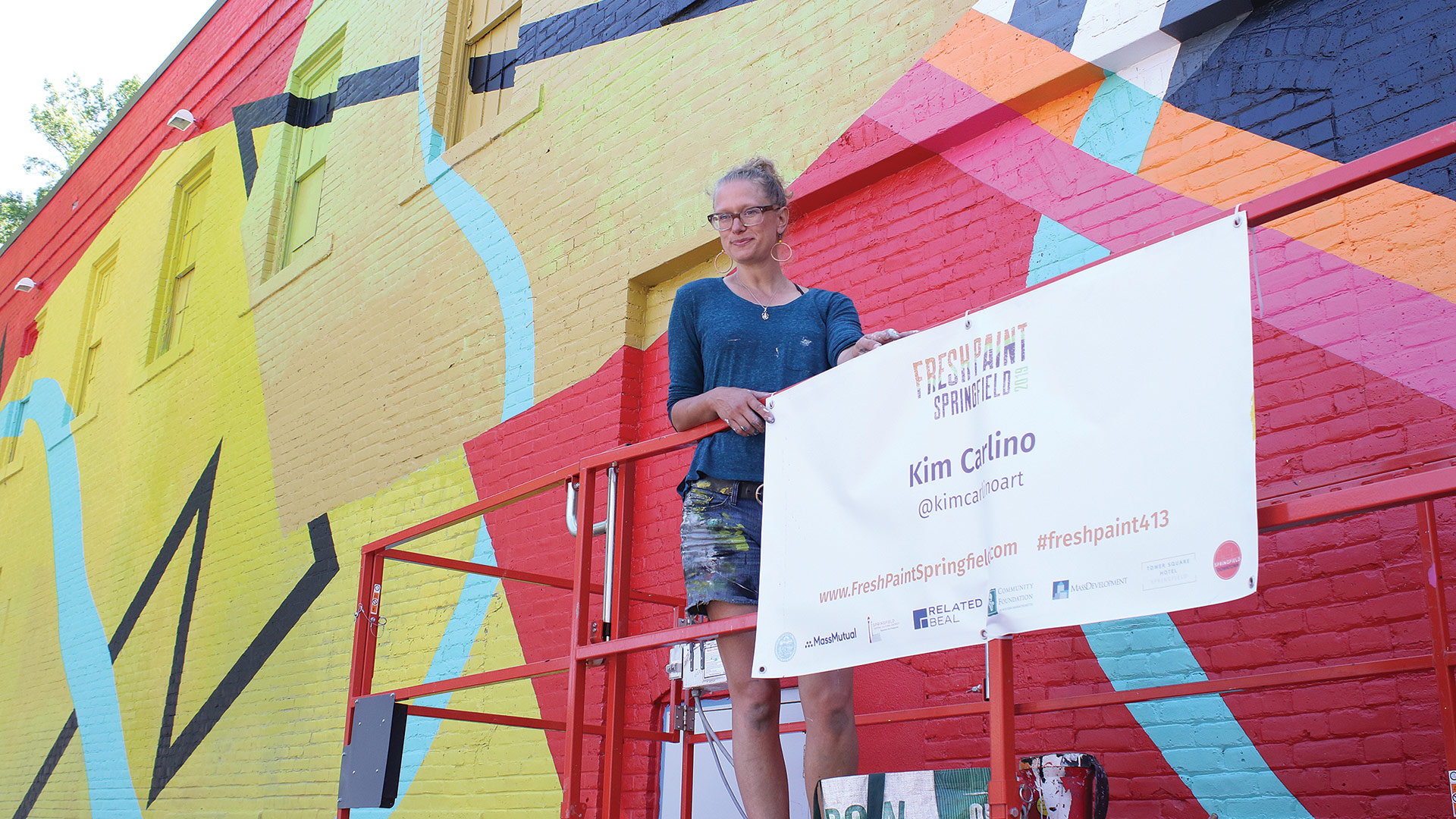 Carlino says she loves the challenge of approaching a big piece and the ability to change and adjust the marks she makes.

“I like the experience of having something that’s bigger than you and can really engulf you,” she said, while transforming that massive, highly visible wall in the heart of the entertainment district. “Everyone coming by is just so thankful; it’s the same experience I have every time I make a mural — everybody wants more color in their life, and we need more of that in our day-to-day.”

Springfield, as noted, is only the latest in a number of cities — in Massachusetts and across the country — to embrace murals and the concept of a mural festival.

Wane One, a muralist for 38 years, has taken part in many of these events. He said the only American art form started by young children has turned into a worldwide artistic movement.

“This artform has gone global,” he said after creating the mural on the East Columbus parking garage. “It doesn’t matter what part of the world you go to right now, it has pretty much taken over.”

In the city of Worcester, the arts and culture sector is a $127.5 million industry, filling 4,062 full-time jobs. And murals have become a distinctive part of the landscape there.

“Overall, ‘Pow! Wow!’ has provided an international platform to know about Worcester and the things that are already existing,” he told BusinessWest, adding that the festival has improved the city’s walkability. “The festival also provided an outlet for many creatives in the city.”

As for Springfield, similar effects are already in evidence.

“It’s been a great success,” said Kennedy. “It has delivered everything I think the mayor and I hoped for on the cultural side, the economic side, and the reputational side.”

Ruhe said the local business community’s support has been extremely helpful through the course of the festival, and she sees her hopes for the event’s future materializing.

“It’s really bringing the community together. People from all walks of life are coming out for the events or standing on the sidewalks looking at the art, talking with each other, painting together,” she said. “What makes mural art so powerful is that is brings art out into the street and into people’s everyday lives.”