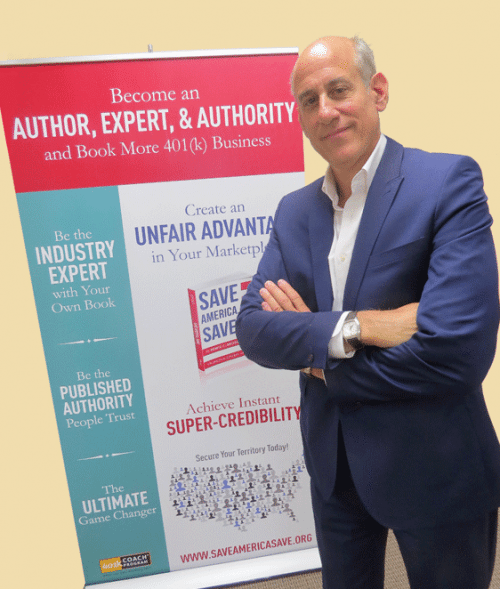 Charlie Epstein, president of the 401(k) Coach, LLC, says his new book, Save America, Save! The Secrets of a Successful 401(k) Plan, could not be considered a sequel to his first offering, Paychecks for Life, published in 2012. The latter was intended for employees, while the former was written for plan fiduciaries (employers) who face a long list of responsibilities. And failure to live up to them can have consequences, as a recent Supreme Court ruling shows.

These are just some of the colorful names he has for individuals and firms who don’t handle a lot of retirement plans — hence it’s a ‘two-plan Tony’ — but can still manage to sell themselves and their services to employers looking to save a few bucks, cut a few corners, or do a favor for an old friend.

“They have a couple of retirement plans, they’re overcharging fees, there’s bad investments … there’s no process in place for monitoring anybody; nobody’s sitting with the employees and helping them, guiding them,” Epstein, president of Holyoke-based 401(k) Coach, LLC, told BusinessWest. “Even a blind squirrel finds an acorn once in a while, but…”

He didn’t finish that sentence, but didn’t really have to; the implication was clear. Most of the time, the blind squirrel doesn’t find the acorn.

That’s why employers large and small looking for someone to manage the retirement plan they’ve created for their workers should look upon two-plan Tonys with a very wary eye, said Epstein, adding that this isn’t just his opinion or what most would consider sage advice.

Instead, it’s what he called a “duty” that employers share, and, even more importantly, it’s the law, as a number of recent court cases have shown.

It’s all spelled out on page 51 of Epstein’s relatively new book (it came out several months ago) titled Save America, Save! The Secrets of a Successful 401(k) Plan. It’s a how-to book of sorts, and while writing it, Epstein probably broke the ‘m’ key on his computer while repeatedly typing out the word ‘must.’

“If you’re an employer and you sponsor a 401(k) plan, you have a fiduciary responsibility to do what’s in the best interests of your employees,” he writes in a chapter titled “Your Role as a Fiduciary.” “Employers must remember that a 401(k) plan is established under ERISA (the Employee Retirement Income Security Act of 1974) for the exclusive purpose of providing benefits to participants and their beneficiaries.

“As a plan fiduciary, you have a duty of loyalty and a duty of prudence,” he went on. “You must be loyal to your participants and their beneficiaries, and avoid any conflicts of interest or prohibited transactions. You must act prudently in managing the plan and the plan’s investments. That means you must have a repeatable process to monitor the plan’s investments, and to fire and hire the managers if they are not performing to certain metrics.”

He explains those metrics in great detail in a book that is his second on the broad subject of the 401(k) but would not be considered a sequel. In fact, Epstein calls them “bookends.”

Indeed, while Paychecks for Life: How to Turn Your 401(k) into a Paycheck Manufacturing Company, published in 2012, was, as that title implies, intended for the employee, Save America, Save! was written for the employer, spelling out those obligations and ‘musts.’

It differs from Paychecks for Life in a few other respects as well. Epstein’s first book took him three and a half years and two ghostwriters to complete — he says he wound up rewriting 90% of their contributions — while the second was penned over a weekend, by his estimation. And while the former was intended for sale ($22.99 is the listed price) and has sold more than 15,000 copies, the latter is essentially being given away to all who want and need to read it.

What’s more, Epstein is committed to helping financial advisors like him across the country to write their own version of the same book.

“I’m now in the author business, and I’m helping advisors across the country become authors,” he explained, adding that he’s partnering with his publisher, Advantage Media Group, to put similar works in print and thus add another element to his coaching activities.

He admits that this strategy seems nonsensical to the casual observer, but to him it makes all the sense in the world, because his ultimate goal is not only to have employees commit themselves to creating paychecks for life, but also to help employers make sure the job gets done. And that means sharing the wealth, or, in their case, the insight, into not only 401(k) management, but how to write the definitive book on that subject.

For this issue and its focus on retirement planning, BusinessWest talked at length with Epstein about his book, but especially the larger issue of effective plan management and how it doesn’t happen by accident.

As he talked about his book, why he wrote it, and the growing sense of urgency attached to the matter of the responsibilities incurred by plan fiduciaries, Epstein borrowed the famous quote attributed to the prolific bank robber Willie Sutton.

Only, he didn’t know it was Sutton who, according to lore, when asked by a reporter why he robbed banks, said, “because that’s where the money is.”

Epstein deployed the line as he explained the importance of the case known as Tibble v. Edison, in which the Supreme Court ruled that fiduciaries have a continuing duty to monitor the investments in a retirement plan, the service providers, the fees, and more — and why he believes there will be many more suits like it in the years to come. (Actually, others are already winding their way through the courts.) 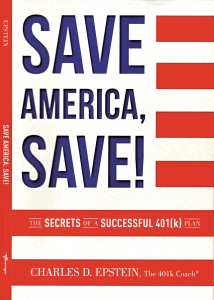 Charlie Epstein says his new book is designed to help business owners with the task of enabling employees to do as the cover suggests.

Edison International, a holding company for a number of electric utilities and other energy interests, provided a 401(k) plan serving 20,000 employees that was valued at $3.8 billion during the litigation. Epstein said his book wasn’t really written for those kinds of companies — although he admits that maybe their top executives should read it anyway — but was intended for employers dealing with plans involving two or three fewer zeroes.

Such companies don’t have large departments handling their 401(k) plans, and, more to the point, the entrepreneurs behind them need to be more focused on running their venture than on administering a retirement plan.

“A plan sponsor fiduciary’s roles and responsibilities are very clearly spelled out under ERISA,” he noted, “but in the small and mid-sized workplace, business owners are not professional fiduciaries — they’re running businesses; they’re making widgets.”

But, as he said, regardless of the size of the company, the basic responsibilities with regard to managing a plan are the same, as are the many forms of trouble a company can run into if those responsibilities are not met, as evidenced by what happened to another, now much-better-known energy company.

“Along came Enron a few years back, which woke everyone up and had people thinking, ‘what is a fiduciary?’” he told BusinessWest. “Enron taught us all the bad things that bad people can do as fiduciaries to their participants, and that set in motion where we are today.”

And by ‘today,’ he meant, among other things, the Supreme Court ruling in Tibble v. Edison. The corporation tried to argue that the statute of limitations had run out and it didn’t have to continue monitoring certain investments (those initiated more than six years earlier, to be specific).

“But the judges said ‘au contraire,’” noted Epstein, “because the laws used in a retirement plan are trust laws, and under trust laws, a fiduciary’s duty never ceases.”

So what does the court’s ruling mean? “It means people need to read this book,” said Epstein with a laugh, noting that its 130-odd pages comprise “a compilation of everything that I have taught and preached for the last 30 years — but in simple terms.”

He said he wrote it because there are, indeed, two parts to the equation when it comes to whether employees can effectively save enough for retirement, and both are equally important. Actually, the employer’s role is more so.

“Even if the employee does everything I say in this book,” said Epstein, holding up Paychecks for Life, “if the employer screws it up…”

The book has five parts, each with its own set of ‘action steps.’

Part one is titled “Our Savings Crisis,” which, as those words suggest, outlines why there is a crisis when it comes to retirement savings and how it can be stemmed. It includes sections on the very uncertain future of Social Security and the emergence of the 401(k) as the “best place to save.”

Part two, meanwhile, is called the “Power of Auto5,” and deals with, among other things, the five automatic features in a plan — enrollment, QDIA (qualified default investment account), escalation, re-enrollment, and something called the ‘stretch match,’ designed to incentivize employees to save a greater percentage of their pay.

While there are detailed references to these automatic features in Paychecks for Life, Epstein said he revisits them here to drive home the point that employers need to be proactive when it comes to helping their employees save.

“Employees, left to their own demise, won’t get it done,” he explained, “so there are some things that I think employers need to do automatically with their retirement plan, such as automatically enroll and automatically increase the contribution.”

Part three is titled “Your Role as a Fiduciary,” and goes into great detail about all those ‘musts’ listed earlier. Part four is called “Creating Smart Savers,” and the concluding section is titled “Measuring Employees’ Success.”

Throughout, there are formal industry terms such as ‘safe-harbor match,’ and far-less-formal phraseology, such as ‘the green-bathrobe effect,’ an anecdote designed to show the folly of taking unnecessary risks with OPM (other people’s money). It would take too long to explain in this space (there’s another reason to get the book).

Overall, the book is designed to create a world of better-informed fiduciaries, said Epstein, adding that, with that knowledge, plan managers can help foster an appetite for more — and more effective — retirement-savings activities, and avoid common mistakes, such as hiring blind squirrels, not monitoring investments, and failing to benchmark those investments.

And that brings him back to that new wrinkle — helping other financial advisors write their own book on the subject.

Already, three advisors he’s working with — in Idaho, New Jersey, and Colorado — are writing their own versions, he told BusinessWest, and there are roughly eight more in the pipeline.

On the inside of the book jacket for Save America, Save! Epstein writes, “are you doing everything you can to ensure your employees feel confident that they will have enough money to retire and pay for all they desire to do someday? Save America Save! reveals the ‘secret strategies’ that will significantly impact retirement-outcome results for you and your employees.”

By publishing the book, Epstein is making sure those strategies are no longer secret, and that’s exactly what he wants.

Instead, he wants them to be common knowledge. If that goal can be reached, fiduciaries can stay clear of trouble, and, far more importantly, this country can retire that word ‘crisis’ when it comes to retirement savings. 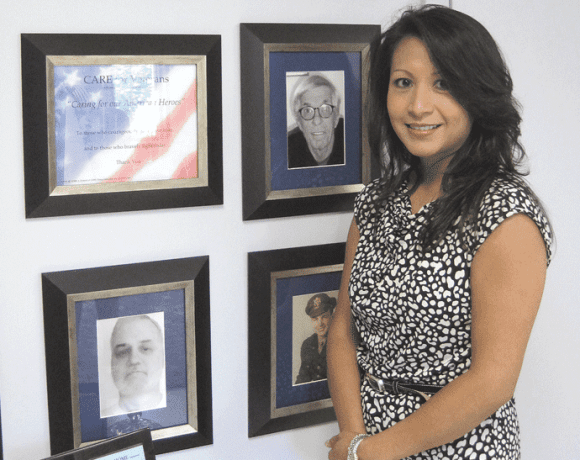 Movement on the Home Front