FloDesign Continues to Ride a Wave of Innovation 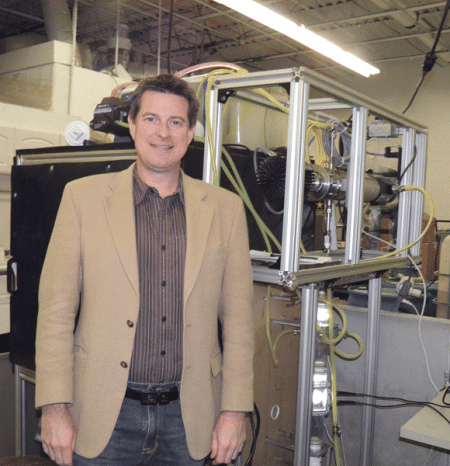 Stanley Kowalski says FloDesign and its spinoffs are continuing a pattern of turning ideas into breakthroughs — and new companies.

“They will never be needed in anything again — during manufacturing, in automobiles, airplanes, furnaces, faucets — anything you can possibly think of,” Kowalski, chairman of the board at Wilbraham-based FloDesign Inc., told BusinessWest, adding that he and his team at FloDesign Sonics, a spinoff venture, are developing technology that will use sound waves for that work.

That technology is based on a scientific discovery made two years ago by a team of engineers at FloDesign Sonics, co-founded by Kowalski, Bart Lipkens, Louis Masi, and Walter Presz, after Lipkens received a grant from the U.S. Department of Homeland Security to figure out how to rid reservoirs of anthrax.

“During a process of trial and error, we discovered that acoustics could play a vital role in detection,” said Kowalski. “It led to the discovery of a three- dimensional wave that we did not predict, and since literature didn’t capture what we saw and the theory for it was not fully developed, we went on a quest to find out why and how it worked.”

The principle they discovered is complex, but Kowalski provided a simplified way to explain it. “First, think of sound waves as an invisible force field that can be used to manipulate and hold things in space,” he said. “Next, imagine a chamber filled with fluid; if you generate a consistent flow of sound waves through it, then introduce living cells or debris into the wave, it will be held there by the invisible force field, and the cells will be gently pushed together and form clumps. When they get big enough, they either fall out of the solution due to gravity or rise to the top due to buoyancy.

“The 3-D wave is like an invisible catcher’s mitt,” he continued. “It retains the contaminant, and, because the diameter of the debris is increased due to acoustic forces, the gravity or buoyancy becomes dominant, and the clumps rise or fall out.”

This invisible catcher’s mitt has a seemingly unlimited number of practical applications, including drug manufacturing and filtering blood during surgery, said Kowalski, adding that the sound-wave technology is one of many interesting developments at FloDesign and its many spinoffs.

These include work on a firearms noise suppressor for the military, a development that will reduce high incidences of hearing damage, as well as new prototype development for a diverse set of clients.

Wayne Thresher, who took the helm at FloDesign three years ago, said engineers who work for the company and its spinoffs pride themselves in thinking outside of the box, executing a design efficiently, and manufacturing a prototype.

“We recently finished a product for a company related to fluid flow; they had needed it for three years, but couldn’t figure out how to make it. But Dr. Presz and I went to their location, and within 20 minutes, we came up with two concepts,” he said. “We like a good challenge, and a lot of things relate to fluid flow and air flow. This is our 25th year in business, and we have some really good success stories.”

For this issue and its focus on environment and engineering, BusinessWest looks at some of those success stories and others that are still being written.

The first was from the National Science Foundation, which issued a challenge to find a way to separate oil and gas contaminants from water. This is critical work because a number of states have had their water supplies polluted due to a process called hydraulic fracturing, or fracking. It involves pumping hundreds of thousands of gallons of water, sand, and chemicals into the ground to break apart rock and free the gas inside, which is problematic because some of the water that returns to ground level is contaminated.

FloDesign Sonics received a grant in 2012 for the initial phase of the project, and another in 2013 to build a prototype, said Kowalski, adding that, later that year, it also tested a prototype for a life-sciences application that involves harvesting and filtering cells derived from the ovaries of Chinese hamsters that are used to make injectable monoclonal antibody drugs, which are being used to fight cancer, diabetes, and other illnesses.

“Most drug manufacturers use a process called ‘harvesting’ in which the Chinese hamster cell is separated via filtration or centrifuge and then killed. Genetic engineering has enabled cells to reproduce readily and create higher concentrations per batch, but the higher concentrations put a burden on the current filtration and centrifugation methods that results in fouling of filters and loss of product,” Kowalski explained. “But FloDesign Sonics’ new method does not touch the cell. We can handle higher cell concentrations for batch processes and enable continuous manufacturing where the cell is kept alive; it is continuously fed with nutrients and continues to express the protein.

“This is the holy grail of drug manufacturing. All future drugs will be made this way, and FloDesign Sonics believes they have unlocked this potential,” he told BusinessWest, adding that the company used venture-capital money to perform more than 100 trials with leading biopharmaceutical companies, which resulted in six prototypes and a machine it is now selling.

In March 2014, the company hired 14 new employees, and in September of that year, it received another prestigious grant from the National Institute for Health, which came with a new challenge: devising a better way of filtering blood during bypass surgery.

“Although it’s the most popular surgery in the world, it is so invasive that incisions to the body cause fat and debris to be released into the bloodstream; the particles can get caught in the brain and cause strokes, which is referred to as ‘pump head,’” said Kowalski, explaining that this phenomenon occurs because the particles are not captured when they go through the centrifuges and filters used in the bypass process.

FloDesign Sonics used the $100,000 grant to put its acoustic-separation technology to work in a new machine that captures the particles, which it is testing on pigs. “We hope to have human trials with it shortly,” Kowalski said.

So, although the company has yet to create its own website or launch a marketing campaign, it has undergone remarkable growth over the past 18 months, including the securing of $10 million in investments, $3 million in grants, and frequent offers to buy the firm out.

“The discovery we made has limitless possibilities, which range from cleaning the planet’s water supply to use in the life-science field and manufacturing adaptations,” Kowalski said. “When we first started, we were really just replicating what others had done, but when we began getting into theories of acoustics, we found missing holes that we probed. We had already developed a system that worked through trial and error, but it was kind of a 3M moment when we understood the depths of what we had discovered.

“Recall that 3M discovered a glue ideal for the Post-it Note and didn’t realize how important the invention was,” he went on. “We had also discovered an amazing tool, but had to identify needs for it in industry. It blows us away that we’re now helping get life-saving drugs to people faster and cheaper.”

Lipkens, who secured the prestigious grants, said it’s exciting to take new technology and put it to use in successful commercial applications.

“It was always my dream to take a discovery in the lab and transform it into a startup company and see everyone involved, including students, become part of a successful endeavor,” he said, adding that he taught a course with his wife, Kirsten, in how acoustics work in musical instruments before the discovery was made at FloDesign Sonics.

Taking discoveries and turning them into products and companies, while also involving students in those developments, has been the pattern at FloDesign from the start.

The aerospace firm has designed, prototyped, and developed products ranging from noise suppressors for jet engines to something called a RAP nozzle, which transmits a fluid force, gas, or fine particles over a distance with minimal loss. The company recently purchased a new CNC mill and lathe, which will allow it to manufacture more prototypes in its Wilbraham location.

This ability to take a concept from the design stage to production is important to Thresher, whose former employers included United Technologies. “They outsourced all of their machine work, eliminating local mom-and-pop operations, and I thought it was the wrong way to do business,” he said.

Although FloDesign is not set up to do mass production, it has the capability of manufacturing up to 2,000 parts for a company, which sets it apart from other contract-engineering firms in the area.

“Engineering companies don’t usually have their own machine shops or the ability to manufacture what they design,” Thresher said, adding that, as a result, many engineers don’t consider factors such as cost when they create a design. “But we do, as we specialize in prototype development.”

Presz created the company in 1990 while he was an engineering professor at Western New England College so he could give his students an opportunity to put theory into practice, and, as a result, FloDesign has a history of using student interns. The experience has proved invaluable for many, including Amanda Kalish, who was unable to find a job after graduating from Worcester Polytechnic Institute.

“Employers want you to have work experience, so this allowed me to bridge the gap while giving me the flexibility to finish my master’s degree in mechanical engineering,” she said.

It has also given her the opportunity to take an idea from concept to prototype and, in some cases, a finished product. “What they do here is unique,” she told BusinessWest. “In a larger company, you are only assigned one aspect of a project and don’t get to see the whole cycle.”

Kowalski said FloDesign Sonics is just one of several spinoff companies that have come out of FloDesign. They include FloDesign Wind Turbine, which was founded in 2008, and FloDesign Water Turbine, which was established in 2009. “They all have something to do with fluid dynamics and acoustic solutions. We have the best people in the world working on this.”

A new product may soon spawn another company. It’s a firearm suppressor that FloDesign developed for the U.S. Marine Corps, and Kowalski said there is enormous potential for it.

He explained that almost every soldier in combat returns with hearing loss, which costs the government more than $2 billion each year. “If they can put a suppressor on every firearm, it could result in a paradigm shift,” he noted.

Although suppressors have existed for some time, they are prohibitively expensive and last only one-tenth as long as the barrel of a gun. “But the prototypes we have developed last longer than the barrel,” Kowalski said.

Mike Harsh, who has recently been appointed to FloDesign Sonic’s board of directors, spent almost 36 years in medical instrumentation and imaging at GE Healthcare, he told BusinessWest, and he has never seen anything like the technology FloDesign Sonics has developed.

“It has the potential to fundamentally change entire industries and the way they think about filtration,” he said. “The entrepreneurial spirit in this company is contagious, and the convergence of this unique and innovative application of acoustics to filtration will unleash a new tool in healthcare that can also be leveraged into other industries.”

Kowalski is also enthusiastic and describes FloDesign’s Wilbraham location as a “think tank.”

“We have created more than 300 jobs, and, although this is our hub, we also have offices in Charlton and Waltham. But it all started here,” he said, as he watched fluid circulate in and out of the machine created by FloDesign Sonics to solve filtration problems related to the manufacture of new pharmaceutical drugs.

“We plan to save people’s lives and eventually clean the planet with our invention,” he said, describing what has become a very fluid path to success.