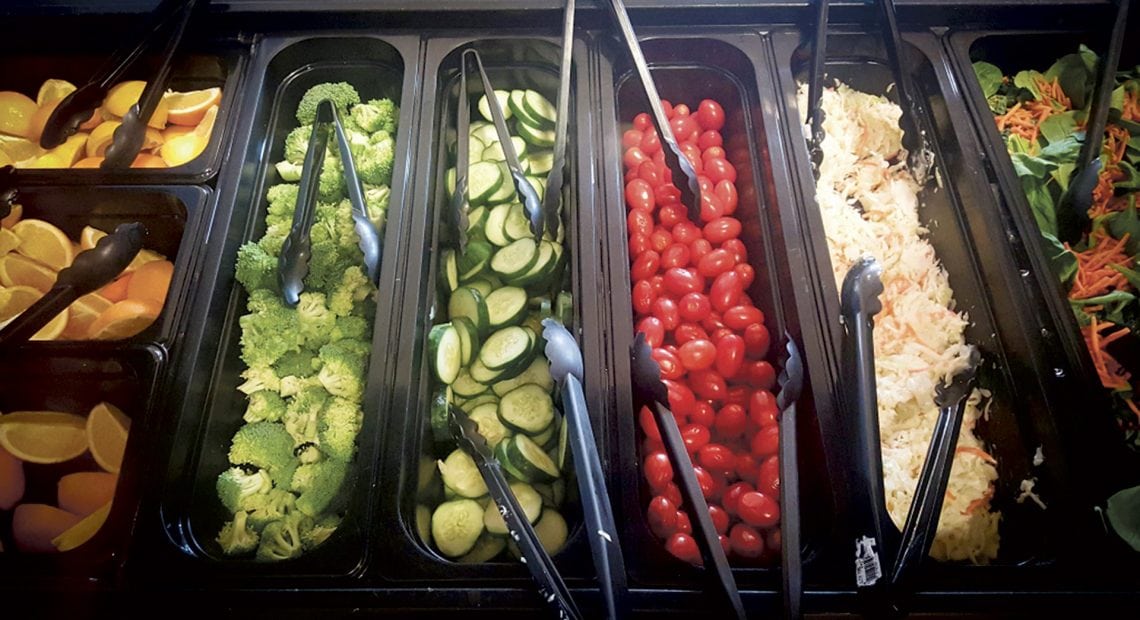 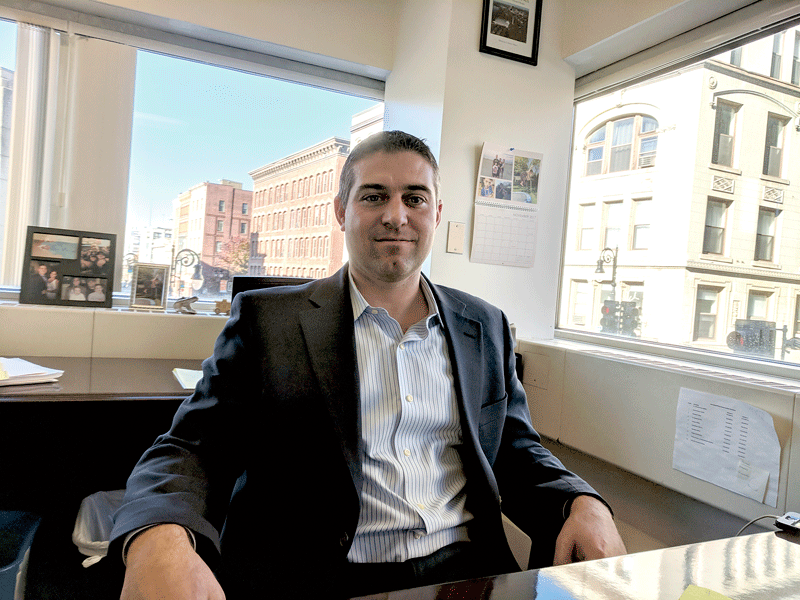 Pat Roach says the plan to improve culinary service in Springfield’s schools could eventually be a model replicated nationwide.

Pat Roach likes to share an anecdote that speaks to the occasional absurdity of school lunch. It involves the community gardens that dozens of Springfield schools have planted and maintain.

“Take Kennedy Middle School, which has a beautiful garden, where kids grow their own vegetables,” said Roach, chief financial officer of Springfield Public Schools. “If they want to serve them in the cafeteria, we have to ship the vegetables to Rhode Island, where they’re washed, cut, processed, and shipped back to Kennedy.”

But what if the city didn’t have to rely on an out-of-state partner to prepare its meals? What if everything served in the schools was cooked fresh, from scratch, on site?

That’s the goal of the Culinary and Nutrition Center, a 62,000-square-foot facility to be built on Cadwell Drive in Springfield, just two addresses from the school system’s current, 18,000-square-foot, food-storage warehouse.

The new facility will be much more than a warehouse, however. It will include all the resources necessary to prepare fresh ingredients for breakfast and lunch at every public, parochial, and charter school in Springfield, and to train staff to prepare meals from scratch right in the school kitchens.

“We’re renting space in Chicopee for cold storage. Our bakery is based in Rhode Island,” Roach said. “Here, we’ll cook all the food fresh on site — egg sandwiches, fresh muffins, local blueberries, as opposed to getting stuff packaged out in California and shipped to us. And it will bring down the cost of using local produce.”

The city broke ground on the center on Dec. 13, and the facility should be fully operational before the start of the 2019-20 school year, Roach said, and will include several components:

• A production and catering kitchen aimed at increasing product quality and consistency and reducing the use of processed foods;

• A produce cutting and processing room where fresh fruit and vegetables sourced from local farms will be washed, cut, and packaged for use by the schools, and waste will be composted;

• A bakery to prepare fresh muffins and breads, which will also incorporate local produce;

• Cold and dry food storage, which will centralize product purchasing and receiving and inventory control; and

• A training and test kitchen, where culinary staff from the city’s schools, and their ‘chef managers,’ will be trained in preparing from-scratch meals in their own cafeterias. The potential also exists to use the facility to train students interested in the culinary arts as a career.

“They want to serve much higher-quality food to students, with more locally sourced products and fresh-baked goods,” said Jessica Collins, executive director of Partners for a Healthier Community, one of the school system’s foundation partners on the project. “For the schools, it means quality food, and for some students, it’s a career path.”

Speaking of careers, the district plans to add 50 to 60 jobs for cooks, bakers, vegetable cutters, warehouse personnel, and other roles. It will take that many, Roach said, to bring food production and preparation in house for the second-largest school food program in New England, one that serves 43,000 meals served daily.

Considering the nutrition needs of those students, many of whom live in poverty, the stakes could hardly be higher.

Dawn of a New Day

The Culinary and Nutrition Center is hardly a standalone project. Instead, its the culmination of several years of efforts to improve food quality in the schools. Among those programs was an initiative, now in its third year, to move breakfast service — a requirement for districts that serve high numbers of children from poor families — from a strictly before-school program to one that creeps into actual class time.

As a result, Roach said, the schools are serving more than 2 million more breakfasts per year than they were several years ago.

“By law, because of the poverty level, breakfast in school is mandated, but logistically it causes all sorts of problems. If the kids don’t get to school early enough, they don’t get breakfast, or they get to class late.”

It has been an adjustment for teachers in that first period, who have fine-tuned how they craft the first few minutes of class while students are eating. But the impact of fewer kids taking on the day hungry more than makes up for that challenge, he argued. Much fewer, actually, as participation in breakfast has risen from 20%, district-wide, to almost 80%, with much of the remainder likely students who ate something at home.

“It’s been a huge success. Nurse visits for hunger pains are down 30%, and more students are getting to class on time and having breakfast.”

But putting breakfast — and lunch, for that matter — in front of students is one thing; serving healthy food is another. And that concern was the germ of an idea that will soon become the Culinary and Nutrition Center. 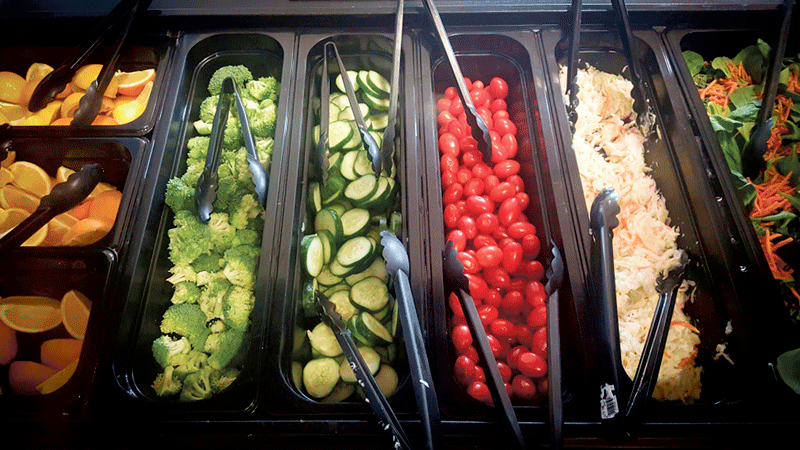 “We want to be feeding the kids — this is better than nothing — but we want to give them something fresh,” he said. “Instead of buying crappy egg sandwiches that cost a lot of money, we know we can do things in-house cheaper and better. They want real eggs, better muffins — not fake, microwaved stuff.”

Instead of a central kitchen that prepares all the meals and sends them to schools for reheating, the vision is for the school kitchens to actually prepare the meals from scratch using fresh ingredients sent from Cadwell Drive. For instance, “they’ll be making their own sauces using fresh tomatoes and fresh basil,” he noted. “We want to have the best food around. We want kids to want to eat breakfast and lunch at school.”

He also wants students to learn about nutrition and food delivery through their own experiences. “Kids are starting to get it. There’s a whole educational component, and kids understand this stuff is being sourced locally from local farms.”

That gives them a sense of ownership of the nutritional changes. For instance, when Michelle Obama led a change in school lunches, emphasizing whole grains, lower sodium, lower sugar, and other improvements, Roach noted, many schools made the shift all at once, and students rejected what suddenly started appearing on their plates.

“But we had already started increasing whole grains in food, reducing sodium levels — it was a huge success with us,” he said. “We think we’re training kids in lifelong dietary habits. If they get accustomed to eating this way, three meals a day, they’ll continue to do so for the rest of their lives.”

Roach said the $21 million project, funded through government and private sources, is being supported by several partners with an interest in food policy, such as Trinity Health, Partners for a Healthier Community, EOS Foundation, and Kendall Foundation.

“Everyone knows how big and important this is, and a lot of people see this as potentially a model for Boston or Worcester, even across the whole country,” he told BusinessWest. “They do see us as pioneers on this project, and a lot of people are excited for us to get this project off the ground. Whether it’s improving student nutrition, decreasing obesity, or reducing hunger, all these organizations share our mission in this center.”

Collins said the city’s support — the project was part of a recent $14.3 million bond approval — is encouraging to those, like her, with a keen interest in community health.

“That’s really exciting, because here you have policymakers investing in what we have been pushing for years, which is higher-quality food for kids,” she said. “When you think about nutrition and higher-quality food and food insecurity, the schools are critical, because that’s where they are every day.”

Roach said the potential exists to broaden the center’s reach to serve other districts, but that’s not in the plans right now. “We don’t want to expand it beyond Springfield until we’re sure we’re serving 100% of our kids.”

That begins with a better egg sandwich, a better muffin — and a better school day.