SPRINGFIELD — Tuesday morning, state Sen. Eric Lesser declared his candidacy for lieutenant governor of Massachusetts. Lesser joins the race with a focus on offering partnership to the next governor, improving quality of life for families, and standing up for forgotten communities.

“Massachusetts has so much going for it, but it’s harder and harder to live here,” Lesser said in an e-mail to supporters. “It’s just too expensive — good housing is becoming out of reach, public transportation is outdated or non-existent, and the cost of childcare is crushing families. The status quo doesn’t work for anybody. It creates skyrocketing prices and gridlock in some places, and vacuums jobs and opportunity from others. It means that Massachusetts, despite its progressive history and incredible assets, is one of the most unequal places in the country.”

Lesser also emphasized his understanding of the lieutenant governor’s office. “I know the job,” he wrote. “It’s to partner with our next governor to make sure she is the most successful governor in the country. What I bring is the perspective of a parent of three young children, the experience of living far from Beacon Hill, and a proven record of standing up for the forgotten corners of Massachusetts.”

In eight years of advocacy, the four-term state senator brought high-speed rail between Pittsfield, Springfield, and Boston from an abstract fantasy to a solid possibility. When COVID-19 hit, he led passage of rescue legislation to help thousands of small, often minority-owned businesses survive the pandemic. At the height of the opioid crisis, his legislation closed the pharmacy-shopping loophole for highly addictive narcotics and reduced the price of Narcan, a life-saving drug that reverses overdoses.

Last year, Lesser authored and helped pass the Student Loan Bill of Rights, which created new protections for nearly 1 million student borrowers. In the most recent state budget, he helped secure funding to help thousands of social workers and mental-health providers pay down their student loans.

“We succeeded by giving a voice to communities that are often invisible on Beacon Hill,” Lesser wrote. “In partnership with our next governor, that is what I will continue to do.”

Lesser has a bachelor’s degree and a law degree from Harvard, and has taught courses at Harvard’s Kennedy School of Government and UMass Amherst. He also worked as a script consultant for HBO’s hit comedy Veep. Before serving in the state Senate, he was one of the first staffers on Barack Obama’s 2008 presidential campaign. He then served in the Obama White House, working as the special assistant to Senior Adviser David Axelrod and helping to shape the nation’s recovery from the Great Recession with the White House Council of Economic Advisors. He lives with his wife and three children in his hometown of Longmeadow. 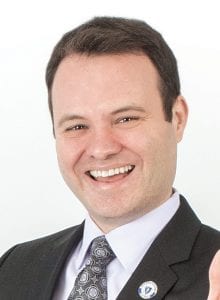 George O’Brien has a lively discussion with Massachusetts State Sen. Eric Lesser, one of five finalists for BusinessWest’s coveted 40 Under Forty Alumni Achievement Award. The two tackle a wide range of topics, including high-speed rail, the new Future of Work Commission Lesser now sits on, and redistricting and what it might mean for Springfield and the rest of Western Mass. It’s must listening so join us on BusinessTalk, a podcast presented by BusinessWest in partnership with Living Local. 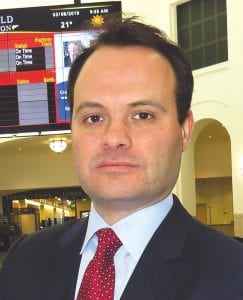 BusinessWest Editor George O’Brien talks with State Sen. Eric Lesser, co-chair of the Committee on Economic Development and Emerging Technologies. The two discuss the recently passed $600 million economic development bill and how its various provisions will help small businesses severely impacted by the COVID-19 pandemic. They also discuss how the bill might help level the playing field when it comes to Western Mass. and other areas of the state.