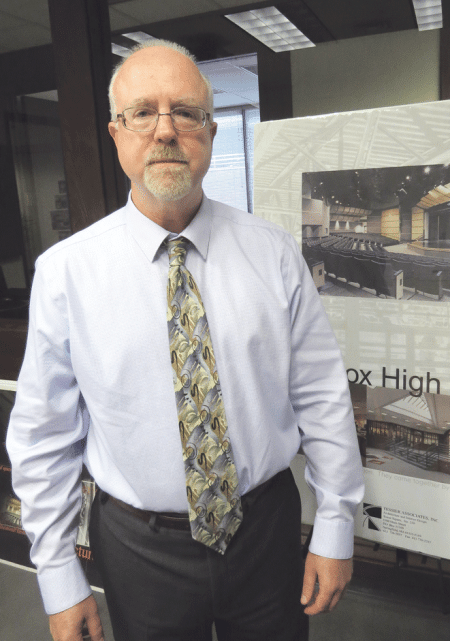 Tessier Associates has been in business since Warren Harding was in the White House and Prohibition was the law of the land. No architecture firm can survive that long — and through all those twists and turns in the economy — without being resilient and resourceful, and the Tessier firm has been both. In recent years, for example, it has been diversifying its portfolio, complementing a dwindling amount of public-school work with projects in higher education and other sectors, and now has a steady supply of work in the pipeline.

The photos, sketches, and blueprints adorning the front entranceways and conference rooms at architecture firms usually tell a story — or, to be more precise, a big part of the story.

Indeed, collectively, these images become a highly visible, although not always organized, chronicling of a company’s history, examination of its portfolio, and window into its past, present, and, in some ways, its future.

This is definitely true at Tessier Associates, the nearly-century-old firm that has long been doing business out of a large storefront on the second floor at Tower Square in downtown Springfield. The photos in the front lobby and hallway leading to the production areas speak to the company’s proud history, which has included everything from dozens of school projects to a number of new churches and a host of commercial buildings, including bank branches, which became a prolific niche for a number of years (more on that later).

The main conference room offers more of the same, but specifically a look at more recent history — and a very necessary diversification of the portfolio to reflect changing times when it comes to designing new public schools, additions, and renovations.

“It’s much more difficult to get school projects today. There are fewer of them out there, and the selection process is now out of Boston — the rules have changed,” said Robert Stevens Jr., long-time principal with the company, noting that, while local school systems once did the hiring of an architect for a project, now those decisions are the purview of the Mass. School Building Authority.

Go HERE for a list of Architecture Firms in the region

This explains why the conference room still features photos and drawings of some of the firm’s school projects — including Lenox Middle/High School, which actually dates back to the late ’90s, and Hampshire Regional High School, newer work but still more than a decade old — but far more wall and easel space is now devoted to work with area colleges and businesses, which have become a far larger and more reliable pipeline of projects.

There are several images, for example, of a new dining commons being planned by Western New England University. Curved, and featuring large amounts of glass and a host of different and unique dining areas, the structure currently taking shape on the drawing board reflects a heightened interest in food and food service at institutions of higher learning, said Stevens.

“Food is a big deal now, and it’s important when it comes to recruiting students — you have to be on the cutting edge of this,” he explained. “These facilities now require a lot of social space, a lot of dining opportunities, a number of seating arrangements, and some quiet space; there’s a lot that goes into these now.”

The walls tell of other recent projects at Bay Path University and Springfield College, and also the Big E, which is exploring possible renovations to several of its historic buildings, including the coliseum (see related story, page 6). Stevens noted that such private-sector work is both necessary and, at the moment, at least, steady enough to keep the firm busy and in a contemplative mode when it comes to expansion and bringing on more staff.

One of the Tessier firm’s renderings of the planned dining commons at Western New England University.

Still, like many in businesses across virtually every sector of the economy, Tessier has some doubts about the staying power of the current expansion, if one chooses to call it that, and noted that there are risks to bringing on more staff, especially in a sector as vulnerable to swings in the economy as this one.

He believes the economy is improving, but, like most others, would like to see more solid evidence that the upswing is real.

“We could be hiring others, and we probably should be,” he explained. “When you’re leery about whether the economy is really improving, you tend to hold back, even when you think you need to hire.”

For this issue and its focus on architecture, BusinessWest takes an in-depth look at … well, the walls and easels at Tessier Associates and at what they reveal about where the company has been, and where it’s going.

Tracing the history of the company, Stevens said it was started by Henry Tessier in 1923, who was still working part-time when Stevens joined the firm in the mid-’80s.

“Henry worked until he was in his mid-90s,” he recalled. “He obviously liked what he did — he was still coming into the office every day.”

Under the tutelage of Tessier and later his son, Bob, and fellow partners Doug Engebretson, who retired in 2012, and Stevens, the firm developed a number of niches within the broad realm of architecture, including everything from churches to those aforementioned bank branches.

As for those bank braches, they were a solid source of work decades ago as area institutions sought to develop a presence in many of the emerging suburbs.

“There was a period of time just after I came here when we really did nothing but bank branches,” he said, noting that, in those days — and perhaps not so much now — architects could, and did, get creative with design of the teller lines and other elements of those structures to give them individuality.

But the firm’s main bread and butter starting in the mid-’80s was public-school projects, said Stevens. The portfolio includes initiatives across this region and beyond, with most of them in response to growing populations and/or a need to replace or modernize aging infrastructure. The list includes additions and renovations at Frontier Regional School in South Deerfield, Commerce High School in Springfield, and JFK Middle School in Northampton, as well as new construction at Quarry Hill Elementary School in Monson and Grafton Elementary School in Grafton, among many others.

But by 2004, the pipeline of school projects dwindled to a trickle as the state all but stopped funding schools and changed the formula for how such initiatives were funded. By the time conditions changed and money started flowing more freely, the selection process for architects had changed, adding another layer to the challenge of landing such projects. The last one the firm handled was Hoosic Valley Regional Middle and High School in Cheshire in 2012.

With school work dwindling and prospects for improvement in that realm dim, the firm has done what it has always done since Warren Harding was in the White House and Babe Ruth was leading the American League in home runs, said Stevens — create a diversified portfolio and adjust its focus to where the work happens to be at a given time.

Indeed, an architecture firm cannot survive 93 years and an untold number of economic twists and turns, including both the Great Depression and Great Recession, without being flexible, resourceful, and resilient, and the Tessier firm is deserving of all those adjectives.

Recently, for example, the firm has garnered a number of projects in higher education, tapping into one of the pillars of the region’s economy.

“We’ve been relying mainly on private work in recent years,” said Stevens, “and we’ve been successful in getting some nice projects. We’ve done a lot of work at area colleges and universities.”

Perhaps the signature initiative in this realm is the $30 million Center for the Sciences and Pharmacy building on the Western New England University campus, undertaken in 2009. “That was a significant project for us, coming right after the recession,” Stevens explained.

But there have been many others, including several projects at Bay Path University, including, most recently, renovation to some of the science labs. There has also been work at Springfield College, Elms College, and other schools. 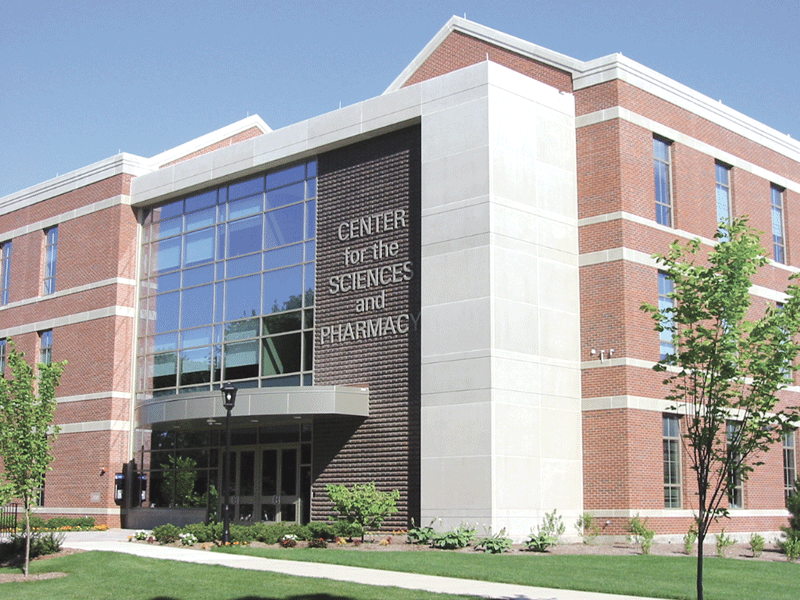 The Center for the Sciences and Pharmacy building at Western New England University is one of Tessier’s signature projects.

Meanwhile, there have been other forms of commercial work, including an office addition and renovation project for UniFirst Corp., a Wilmington-based supplier of uniforms and provider of related services that has a facility in Springfield, as well as another site in New York that the Tessier firm is also working on.

Those projects and others have provided Stevens with a sense that the economy is improving, that business owners are becoming more confident about the immediate future, and that this scenario may continue for some time.

And this sentiment wasn’t present in the years immediately after the Great Recession, even when analysts were saying the economic picture was brightening and businesses in many sectors, including those in the broad realm of construction, should see some trickle-down.

“Things were questionable in the few first years after the recession ended — I would hear that the economy was improving, but we weren’t feeling it,” he explained. “But at this point, it seems like there’s more activity.

“We have backlog — you can see enough work out for a year or two,” he went on, “and that’s pretty unusual for recent years.”

This is what he tells builders who will call and ask him what he thinks and what he knows — calls that come often, because, historically, architecture has been an accurate barometer of the economy; when firms are busy, that’s a good sign, and when they’re not … well, no explanation needed.

“The climate is improving,” he said in conclusion. “I’m feeling much more optimistic than I was a few years ago.”

Tucked in a corner of the Tessier firm’s conference room is an aerial photo of the Elms College campus, complete with the wellness center the company designed.

Stevens couldn’t pinpoint the date of that project, but did know that it was some time ago. That was an acknowledgement that what’s on the walls and easels of such firms don’t exactly (or always) reflect current events.

But those items tell a story, or, as noted earlier, the story.

In this case, it’s one of a history of creativity — both on the drawing board and in business itself — and resiliency.

In other words, Tessier has developed a blueprint for surviving and thriving in changing times. 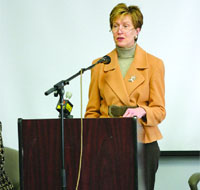 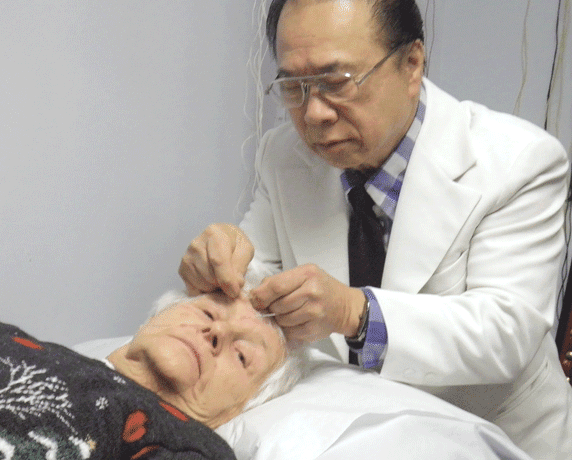 An Ancient Form of Medicine