Volleyball International Hall of Fame Strives to Expand Its Presence 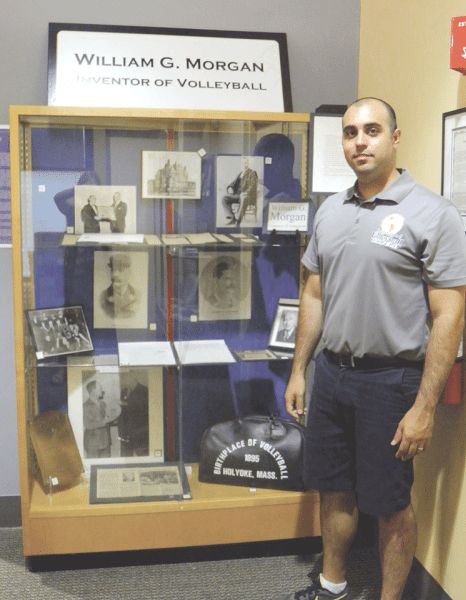 George Mulry stands in front of one of the many displays at the Volleyball Hall of Fame, which is seeing a rise in visitorship.

In 1895, William Morgan invented a game he called ‘mintonette’ for adult males at the Holyoke YMCA in hopes of retaining members who were leaving because they found another recently invented game, basketball, to be too violent.

“He was the Y’s physical-education director, and he created the sport so middle-aged businessmen would have something to do on their lunch break,” said George Mulry, executive director of the International Volleyball Hall of Fame in Holyoke. “The name of the game was changed to volleyball a year later by a professor at Springfield College, and today, it’s played by more than 880 million people. It is an international powerhouse sport, the second-most-popular game in the world, and one of the most popular at the Summer Olympics.”

Indeed, the game has come a long way since it began in a small gymnasium in Holyoke. It ranks as one of the top sports in nine countries, and the Fédération Internationale de Volleyball (FIVB) boasts 220 members, making it the largest sports federation in the world.

“I see more people smiling when they are playing volleyball than I do in any other sport; it’s a great game, and people at any level not only enjoy it, but appreciate the camaraderie it promotes,” said Charlie Diner, a member of the Hall’s board of directors. “Volleyball is a game that is fun.”

In many ways, the Hall of Fame created to honor the games, founder, legacy, and greatest players, coaches, and contributors has followed a somewhat similar path.

It started in a closet in Wistariahurst Museum, with some additional space in Holyoke City Hall for storage. It has moved a few times over the years, but has generally struggled to find adequate space and resources to properly tell the game’s intriguing story.

But the Hall has gained some much-needed momentum in recent years, building awareness, gaining visitorship, hosting more events, and adding new displays to capture the game’s progression and impact on society.

Visits to the museum are on the rise, and today, 4,000 to 5,000 guests embark on the self-guided tour inside the space each year. One thing they particularly enjoy is trying on the Gold Medal won by Maurico Lima at the 1992 Summer Olympics. The athlete was inducted in 2012 and donated the medal to the museum, along with other memorabilia.

“Many people pose for photos wearing it around their necks. It’s a popular thing to do,” Mulry said. “Donating items is a way for Hall of Famers to keep their legacy going.”

But the museum operates on a tight annual budget of $215,000. Mulry is the only full-time employee, and the museum relies heavily on fund-raisers, donations, and sponsors to keep it operational.

For this issue and its focus on sports and leisure, BusinessWest offers some quick history lessons on the sport of valleyball and a detailed look at how its shrine is scoring points as it strives to gain relevance and increase visitorship.

Mulry told BusinessWest the Hall of Fame has always had close ties to Springfield College, a relationship that began when Morgan met James Naismith, who founded the game of basketball in 1891 while teaching at the International YMCA Training School (now Springfield College).

Morgan was on Northfield Mount Hermon’s football team, and after watching him play during a game at the college, Naismith successfully recruited the young athlete and brought him to Springfield College. “He had wanted to become an engineer, but abandoned those plans to teach physical education,” said Mulry.

After graduating, Morgan became director of physical education at the Holyoke YMCA and gave birth to his own game. “He borrowed from a lot of different sports to create it. He took the net from tennis, the ball from basketball, and the innings from baseball, which were used when the game was first played,” Mulry explained.

The game of mintonette received its new name after it was introduced to the public at a tournament at Springfield College that was held during a national conference for YMCA directors. “Professor Alfred Halsted decided volleyball was a more appropriate name because the players were volleying the ball across the net,” Mulry said. “After the demonstration, the game spread through the nation’s YMCAs, then was adopted by the military because the troops were looking for something to do that was not physically taxing.

“The YMCAs took the game to the Philippines and a few other countries, but the military introduced it to Europe and the rest of the world during World War I,” he went on, “and the level of play increased dramatically.”

The first national championship was held in 1922 at the Brooklyn YMCA, but the game was played on an almost a purely recreational basis through the early 1930s. However, a dramatic change occurred in April 1947, when representatives from 14 nations formed the FIVB and began recruiting teams from across the world to play in tournaments.

The first world championship for men was held in 1949, followed by the first world championship for women in 1952, and the game reached an even broader audience a dozen years later when it was introduced and played at the Tokyo Olympics by both men’s and women’s teams. Beach volleyball wasn’t added for another 32 years, however, and that inaugural Olympic competition took place in Atlanta.

Despite the game’s popularity, it wasn’t until the early ’70s that anyone proposed creating a museum to house memorabilia and recount the game’s history and the success of its players.

“At that time, the Greater Holyoke Chamber of Commerce was looking for ways to position the city and make it interesting to tourists,” Mulry noted, adding that, even though it established an ad hoc committee to promote the idea of Holyoke becoming home to a Volleyball Hall of Fame, the only thing it did was host an tournament for YMCA teams.

However, in 1978, the Holyoke Volleyball Hall of Fame was officially incorporated, and the first induction ceremony was held in 1985. But the organization still didn’t really have a home.

“All it consisted of was a closet in Wistariahurst Museum and space in City Hall that was used to hold memorabilia,” Mulry said, adding that things changed in 1987, when the city of Holyoke gave the Hall an area in a building on Dwight Street to use free of charge. “The space was small, and the only things put on display were a few jerseys, nets, and uniforms,” Mulry said.

However, when the building was renovated a year later, the museum was given an area three times larger, which encompassed 4,500 square feet.

Mulry told BusinessWest it was only supposed to be a temporary home, and a capital campaign was launched with the goal of raising $27 million for a new building. “An architect was hired, and 15 possible sites were looked at before it became clear that it wasn’t feasible to raise that amount. So, the temporary space became our permanent home.”

Although a few exhibits were added at that time, the majority of displays, as well as the annual events the organization stages, have been developed over the last four years as officials take a proactive stance to attract new visitors and increase interest in the sport.

Their efforts were helped two years ago, when the museum received additional space in the building, which allowed them to move their archives there.

“We’re categorizing them, and we created a special exhibit titled ‘Volleyball in the Military,’ a 1964 Olympic exhibit, and we continue to put single artifacts on display,” Mulry said. “We also set an area aside for local events, and have hosted a lot of receptions over the past two years.” 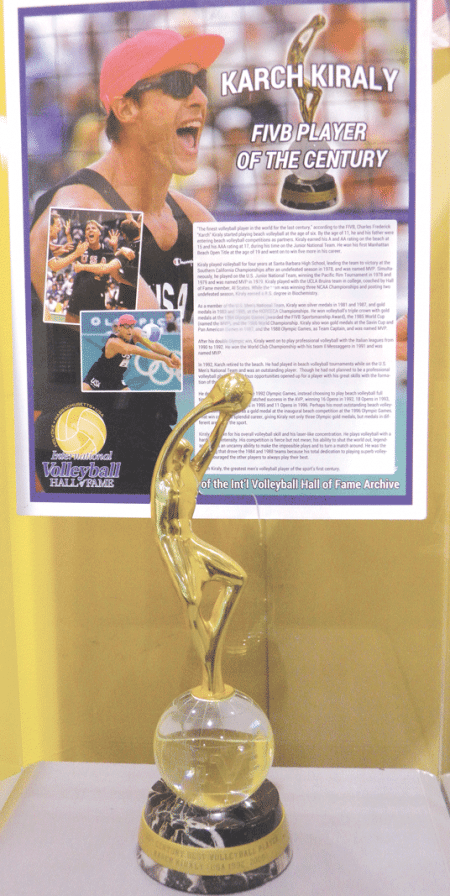 Popular tournaments include the annual Police and Fire Challenge, which pits members of the New York City fire and police departments against teams composed up of emergency personnel from across New England. “There is a great rivalry between the Holyoke and Springfield teams,” Mulry said, adding that they are among many groups that participate.

During last year’s tournament, state Sen. Don Humason and state Rep. Aaron Vega unveiled a new exhibit titled “Humanity and Sports,” which was dedicated to two members of the New York City team who lost their lives in 9/11. “It has been one of our most well-received displays,” Mulry said.

To carry out these various programs, the Hall relies heavily on support from the community and, especially, Holyoke-based businesses and institutions.

“What we do would not be possible without the business community; they help offset our expenses, and we are certainly grateful for their help,” Mulry said, adding that the city of Holyoke, Holyoke Medical Center, and Holyoke Gas and Electric are major sponsors, while Dinn Brothers and the Dowd Agencies have been sponsors for more than a decade.

“They continue to make significant contributions and fund our induction ceremonies and events. PSI 91 is our newest sponsor, and we have many other local firms that support us,” he noted.

The organization also relies on an annual appeal, and donations are collected from 40 participating regions under the umbrella of USA Volleyball, which provides a dollar-for-dollar match, resulting in about $30,000 each year.

“They certainly see the value in having the museum on U.S. soil,” Mulry said, as he discussed how he and the 15 members of the board of directors are doing all they can to promote interest in the museum. “We’re working with the governing body of the Fédération Internationale de Volleyball to finalize an agreement that would make us the official repository for artifacts in the world. We expect make an announcement about it in October during the induction ceremony.”

That will allow the Hall to open its fund-raising to the 220 federations associated with the FIDV, and additional funds raised will be used to make improvements and update the displays.

“We’re the one true Volleyball Hall of Fame for the world, and anyone who is at all interested in the history of any sport should come here,” said Mulry. “We offer people a chance to see artifacts and learn about a sport that started out in Holyoke.”

Diner agreed. “We’re trying to expand awareness of the sport and its history to help grow the game, and this is a good place for community organizations to hold events. It’s steeped in Holyoke’s history,” he said.

It’s an intriguing history indeed, and it’s likely that Morgan could never have imagined that the simple game he created for aging businessmen would become a hugely popular sport played in nations throughout the world.

Meanwhile, the sport’s Hall of Fame still has considerable work to do to build its profile and visitorship, but it is making net gains — in many different respects.