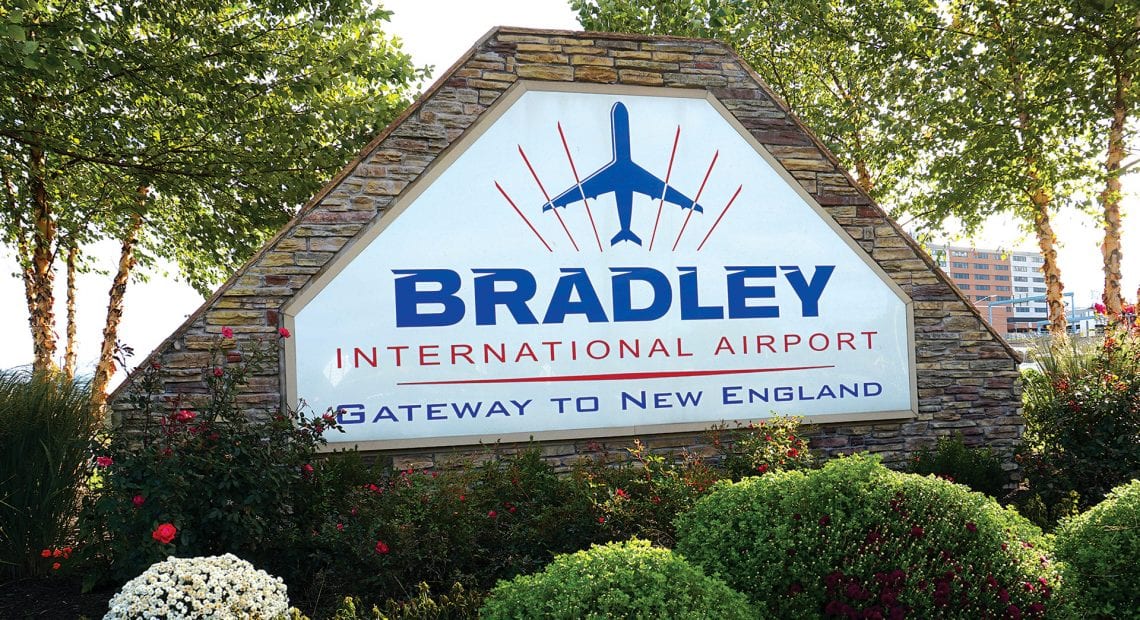 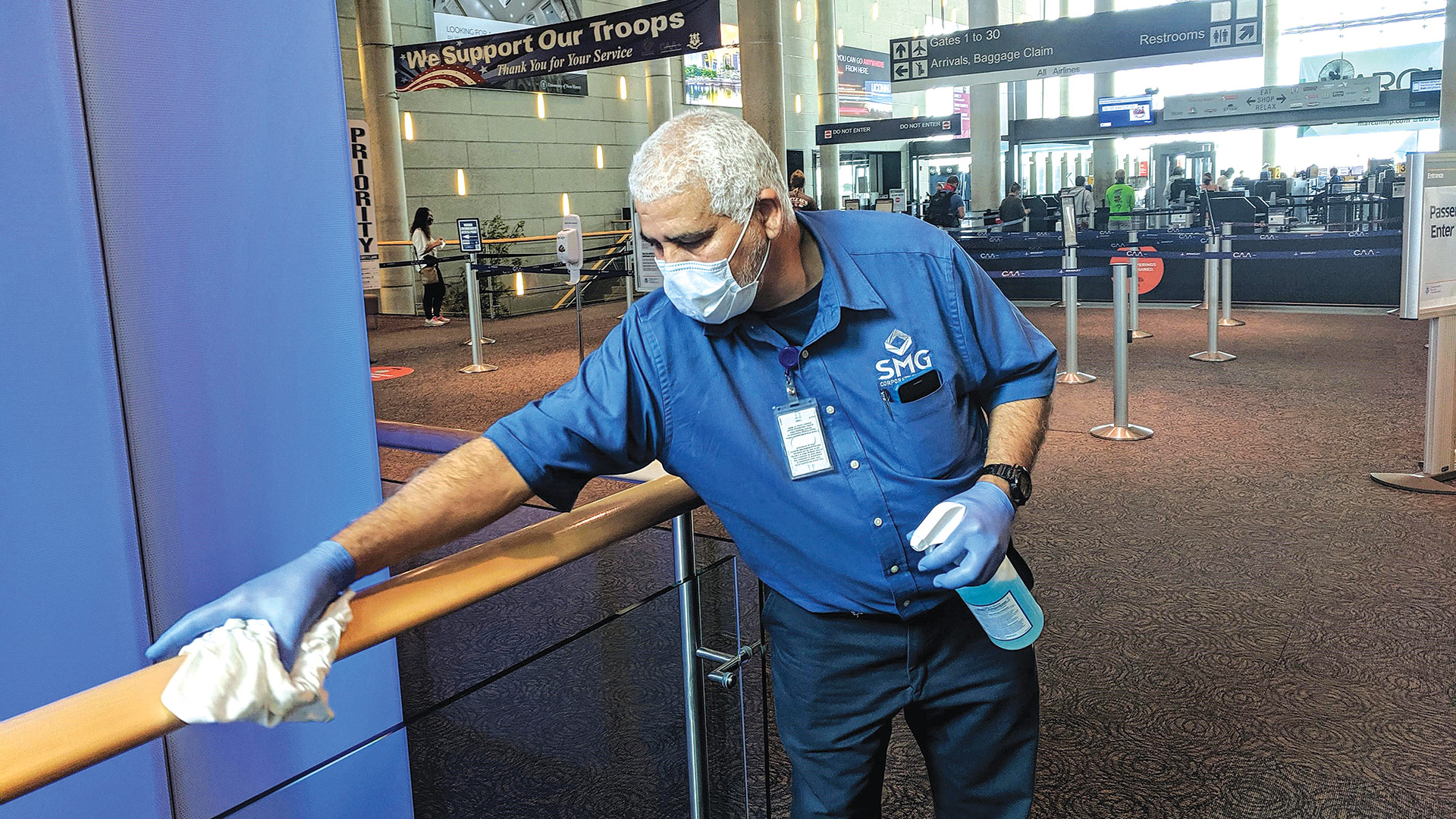 Travelers at Bradley (and there are fewer of them) will find a number of new protocols, from mandatory face coverings to more frequent cleaning and sanitizing.

Bradley International Airport has a contract with a medical laboratory willing to conduct COVID-19 testing for arriving passengers.

Kevin Dillon, executive director of the Connecticut Airport Authority (CAA), which manages the airport in Windsor Locks, Conn., thinks that would be an ideal way for healthy travelers to avoid a mandatory 14-day quarantine instituted by Gov. Ned Lamont in July.

But state leaders turned that option down.

“We have a lab that’s willing to start testing here, yet we can’t convince the Department of Public Health to allow that to occur. It makes no sense,” Dillon said. “Because what’s impacting us now is the travel advisory that’s been put in place here in Connecticut.”

According to the policy, both tourists visiting from other states and Connecticut residents returning from vacations in COVID-infested areas are required to fill out a travel advisory form and indicate where they will self-quarantine. Failure to do so incurs a $1,000 fine.

“Unfortunately, the airlines are reacting to the travel advisory by pulling flights out of the airport,” Dillon explained. “As you can imagine, it’s very, very difficult for someone to take a week vacation and then, when they come back, have to take a two-week quarantine. The same goes for business travel — people aren’t going away for two days when they have to quarantine for 14. That’s had a pretty chilling effect on our level of recovery.”

It’s a recovery — if one can call it that — from the most dramatic loss of business airports across the country have ever experienced, the post-9/11 period included. In April, passenger volume at Bradley was down 98% compared to the same period last year. The airport has recovered some of its volume, but a typical day is still some 70% to 75% below 2019 numbers. And the state of Connecticut is doing the airport no favors with one of the most rigid travelers’ advisories in the nation. 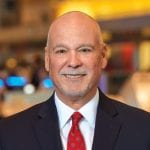 “Airports are competing for some very limited airline assets, aircraft and flights, so we want to present a market that’s viable. This travel advisory really starts to skew how some carriers look at Connecticut and Bradley Airport and this region.”

“I’m not questioning the medical necessity of a travel advisory — I’m not qualified to question that, and I take folks at their word that it’s is a necessary thing,” Dillon told BusinessWest. “What we have asked for here is a testing option. If you get a negative COVID test, you should be able to avoid a 14-day quarantine period. Massachusetts is doing that.”

He has other questions — including why it’s OK to cross the border for a funeral, but not a business meeting — and they all come, he said, from a place of common sense. “We’re not questioning the travel advisory, but I do think testing here at Bradley would make all the sense in the world.”

If the impact of discouraging interstate travel was a short-term thing, it would be less frustrating, but Dillon is looking far beyond 2020, when airlines will emerge from the pandemic as much smaller companies, with fewer planes to spread around the nation’s airports, and some tough decisions to make about where to put them.

“They’re really having a struggle,” he said, with some airlines saying they don’t expect to return to normal operations until 2023 or 2024. “There are going to be winners and losers coming out of this.”

This is true, he said, not only of airlines, but of airports.

“Airports are competing for some very limited airline assets, aircraft and flights, so we want to present a market that’s viable,” Dillon explained. “This travel advisory really starts to skew how some carriers look at Connecticut and Bradley Airport and this region. It’s a concern of ours not only for today but as we look to the future — what damage we’re doing to our relationships to airlines as well as their view of this market.” 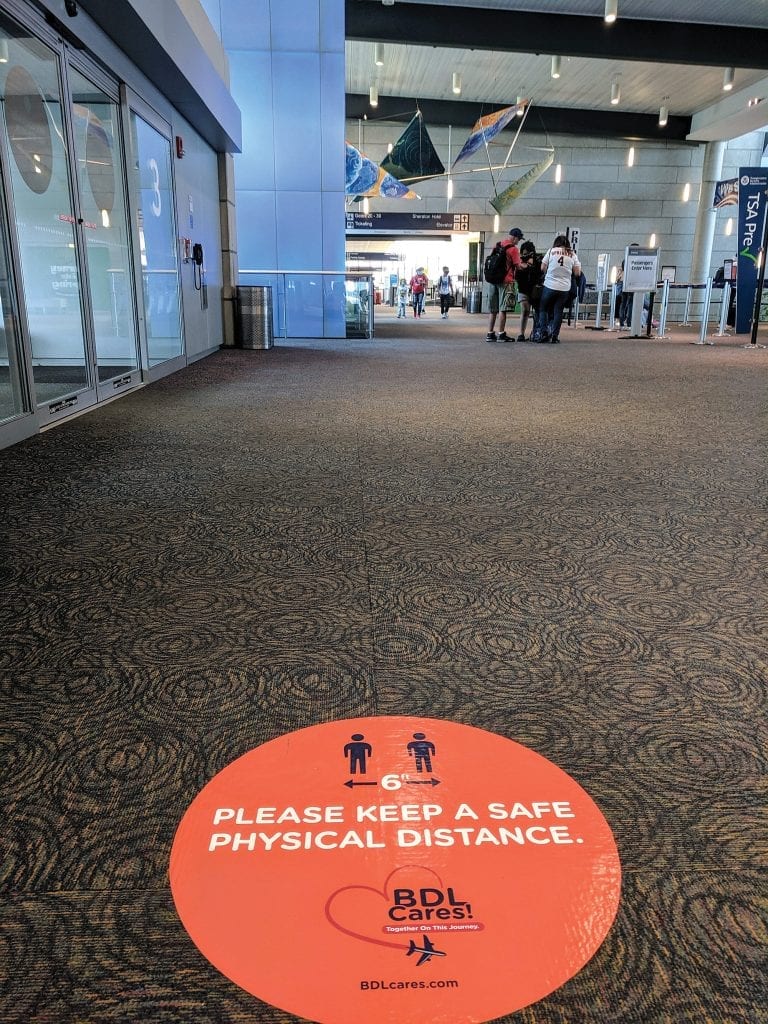 Physical distancing is easier when terminals are less crowded, as they are now.

For this issue’s focus on transportation, BusinessWest spoke with Dillon about how Bradley is navigating an unprecedented business challenge, and why it’s important to keep investing in the future, because the future is where this story really gets interesting.

Shifting on the Fly

Even before COVID-19 was a thing, Dillon often spoke about how Bradley was constantly competing on two levels: with Logan and the New York airports for passengers, and with every airport in the country for those precious aircraft assets. On thar front, Connecticut’s mandatory quarantine isn’t helping.

“Airlines have to be in locations like Boston and New York simply because of the population and business volume. But airlines have alternatives in terms of not having to serve Bradley and still serving a good portion of this market area,” he explained. “I don’t think it would serve the area really well without us, but an airline trying to skinny down as a result of cost-cutting measures could very well look at it that way.”

The more pressing issue in 2020 has been plummeting demand, of course. “If we don’t have passengers coming through the airport, airlines cut back, we don’t get airline fees, and no one’s here utilizing concessions, parking, renting cars, all the businesses here. When your business is off 75% to 80%, you have a corresponding drop in revenue. It’s a difficult balancing act.”

Dillon said Bradley was fortunate to receive some financial assistance from the CARES Act, which allocated $10 billion to airports across the country. Based on the allocation formula, Bradley received $28 million, which sounds like a lot of money, he went on, but to put it in perspective, that covers about three months of operating expenses and debt service. And the pandemic-related travel slowdown is now well into its sixth month.

“We are fortunate that, as an airport authority, we did create what I consider some healthy reserves, and we will rely on those reserves to some extent, but it wouldn’t be prudent to exhaust our reserves,” he said, noting that they impact bond ratings, among other things.

Bradley did institute a hiring freeze, not replacing most employees who chose to retire this year, and has cut department budgets by 10% to 20%. The CAA is also looking at further measures, including a voluntary severance program.

“It is a goal of ours to try to prevent involuntary severances,” Dillon said. “We don’t want to get to a place where we’re talking about layoffs. For now, that’s off the table. We tried to make a commitment to the employee base — first and foremost, to protect their health, and second, to protect their paycheck. As you can imagine, it’s a challenge.”

About $20 million in capital projects are on hold as well, but some are moving on, including an airport-wide restroom-renovation project that should be complete by October, and features a largely touchless experience with sinks, soap dispensers, hand dryers, and more. These features were planned well in advance of the pandemic, but Dillon said travelers will appreciate them more now.

“People want a safe, healthy, clean environment, and we try to deliver that the best we can,” he noted. “Folks think differently about hygiene in public places now; they have different expectations.”

Some airlines have committed to limited capacity on planes as well, Dillon said, citing Southwest and Delta as two examples. And the airport is developing touchless kiosks where travelers don’t have to interact with an agent or touch the screen to activate the ticketing process. 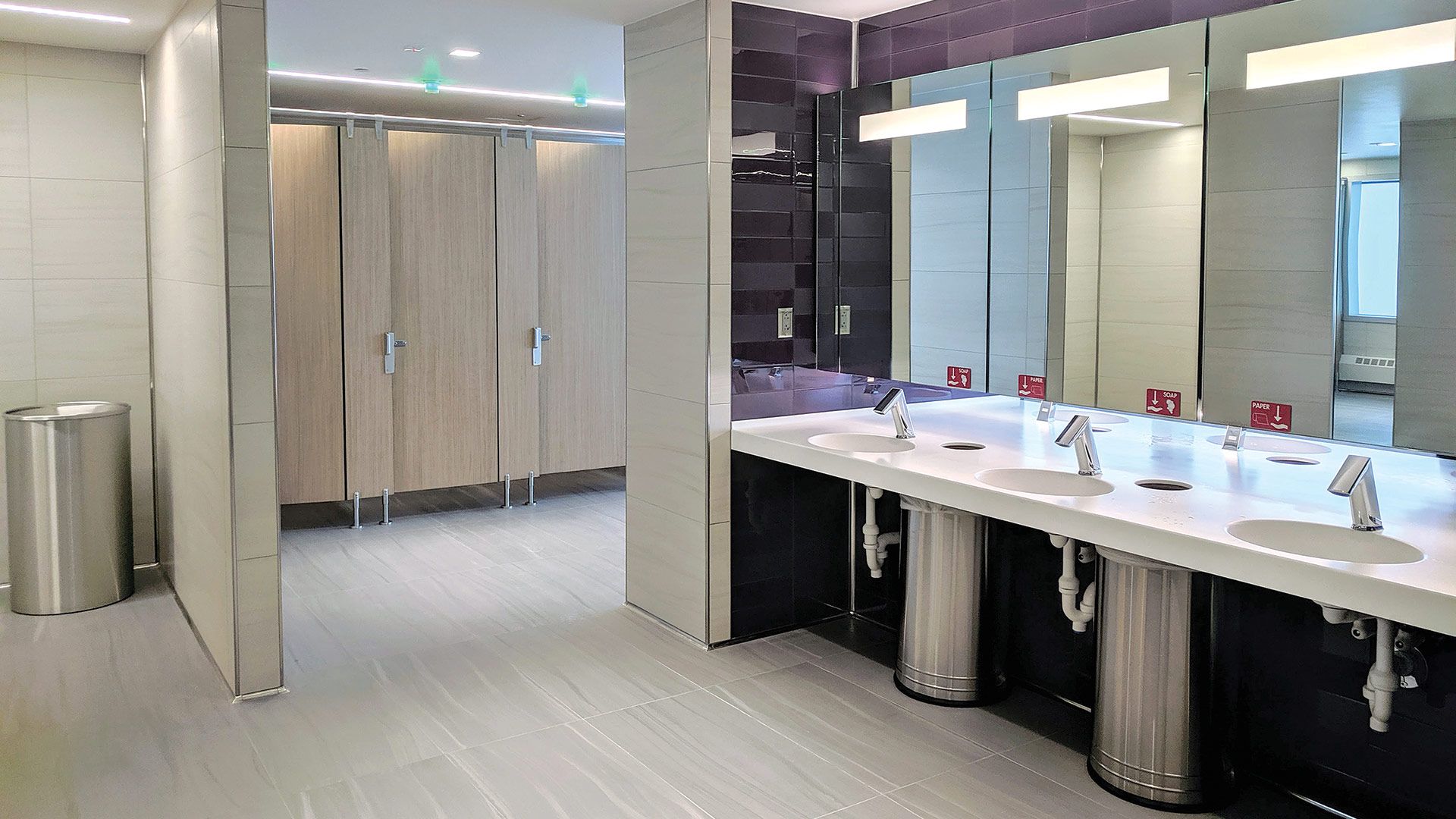 A major renovation of Bradley’s restrooms, including many touchless features to discourage the spread of germs, began well before the pandemic.

“The key for us is to keep differentiating ourselves from our larger competitors,” he told BusinessWest. “We want people to understand that Bradley is going above and beyond in terms of sanitizing and cleaning the facilities. And Bradley might represent a better option because it’s less congested. We’re going to keep highlighting to the traveling public why Bradley is a better alternative.”

View from the Ground

Again, however, all these efforts are blunted by the fact that considerably fewer people are traveling, and Connecticut is making it difficult to do so.

Airlines are struggling too, Dillon said, sending 135-passenger planes into the sky with only 25. And, like airports, they’re all having internal discussions about the future. Bradley’s five-year contract with carriers expired in June, and with no airlines in a position to sign another five-year deal, they opted for one-year extensions.

But even had longer-term contracts been in place, he explained, “I think a lot of people don’t understand how an airline agreement works. It doesn’t necessarily guarantee you full revenue coming in, because airlines pay revenue in large measure based on landing fees. Airlines can have a presence and pay rent for space, but they’re not required to operate a certain number of flights. If you have carriers cut operations in half, the landing fees we get are then cut in half from that carrier.”

As a difficult, uncertain year continues to unspool, there are a few bright spots, especially progress on a $210 million ground transportation center — expected to be fully operational in late 2021 — that will house car-rental services, expand public parking, and incorporate public-transit connections.

“All that money had been bonded prior to the pandemic, so we’re committed to the project,” Dillon said. “It will really transform the look of the airport and our operations. People who haven’t been to the airport recently will be surprised by the magnitude of the project and how it’s transforming the space out there.”

In addition, cargo business at Bradley has remained consistently strong. “I believe one factor is that people are staying home and doing a lot of online ordering, so we’re seeing small-package delivery — UPS, Fedex, and Amazon — all increase at the airport,” he noted. “Unfortunately, the revenue profile of cargo is much different than passenger traffic, as the bulk of the revenue at any airport comes from the passenger side of the house. But I appreciate that cargo is doing well right now.”

After all, in a year of startling setbacks, any good news is welcome. But what airports need now is clarity — and for people to get back on planes.

“It’s going to be a challenge,” he said. “I’m convinced that, by working smart and having employees work smart, we’ll be able to get through this. But it will be a balancing act for a while.” 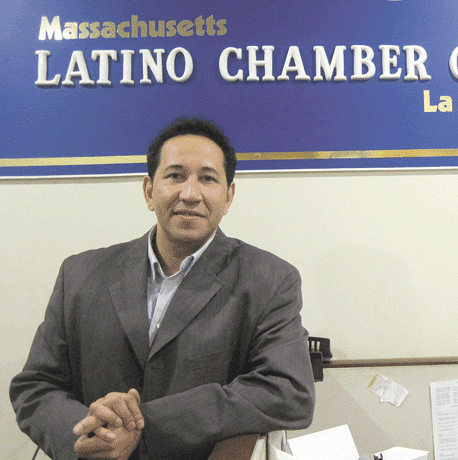