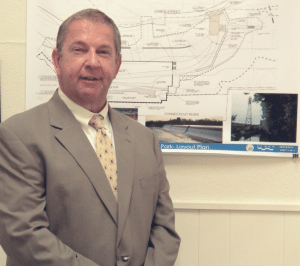 Two years ago, South Hadley won a Communities by Design award from the American Institute of Architects, or AIA. In addition to the accolades, it earned town leaders a visit from a sustainable-design assessment team, which created a revitalization plan for the Falls section of town.

The committee that crafted the winning proposal is called the Rise of the Falls Facilitation Group, and part of its work involves implementing recommendations put forth in the report.

It has been updated with new ideas and adjustments, but the vision of a rebirth of the industrial neighborhood, which had fallen into a state of disinvestment, has become a focus for town officials.

“The Falls was once the center of life and commerce in South Hadley, and we want to restore that vibrancy today,” said John Hine, chair of the Board of Selectmen.

Frank DeToma agreed. “The Falls has enormous potential, and a lot of people are working to move the area toward that goal,” said the board’s vice chair.

The South Hadley Falls Neighborhood Assoc., which was formed two years ago in response to a recommendation by the AIA, has taken a proactive approach to improvement. It publishes a monthly newsletter, continuously lobbies the Select Board to take action that will help that section of town, and has created events that have brought thousands of people to the area.

Its efforts have been supplemented by the Rise of the Falls group, which is working to create a historic district in the neighborhood. Other initiatives are being undertaken by the four-month-old South Hadley Redevelopment Authority, which has been tasked with improving economic conditions in the Falls. The group has chosen a consultant to write a redevelopment plan, which it needs to move forward, and was in negotiations with the firm when BusinessWest went to press.

However, over the past year, these endeavors received a major boost from a number of noteworthy projects. A new library has been built at the corner of Main and Canal streets on a formerly vacant lot, and is slated to open this fall. Its brick façade is reminiscent of the industrial history of the Falls, and the public spaces inside have beautiful views of the Connecticut River.

The library is situated above a new, $12 million park slated to open this month. It is set on the banks of the river and overlooks the Holyoke Dam. 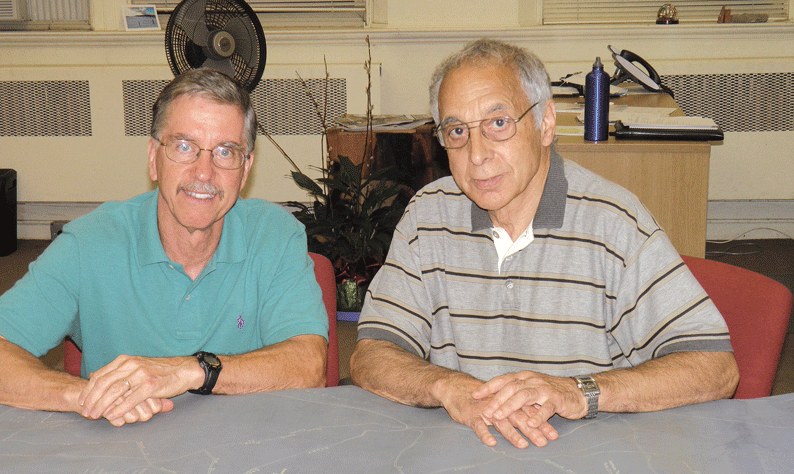 John Hine, left, and Frank DeToma hope the vibrant neighborhood that once existed in the Falls can be revived to meet 21st-century standards.

Work on the park began in April when the Texon factory building, which was an eyesore that had been vacant for 20 years, was torn down. “It was a very complicated demolition,” DeToma said.

But it is complete, and the park, which features a lookout platform, will be handicap-accessible and enhanced by attractive landscaping and plantings that will be installed in October.

Town officials don’t plan to hold a grand opening ceremony until next May, because the park must remain closed from Nov. 1 to April 1 due to a mandate by the Army Corps of Engineers. “But we will have limited access for special viewings if the conditions are right,” said Town Administrator Mike Sullivan. He explained that the park is being built by Holyoke Gas & Electric as remuneration to the town for using its half of the river, which came about through an agreement with the Federal Energy Regulatory Commission.

In addition to the breathtaking lookout platform, the park will feature walking areas and a quarter-mile pathway that will begin at the Vietnam Memorial Bridge.

“It is very much in keeping with the master plan of trying to link the village common with the Falls through a series of bike paths and walkways, and we are hoping that, in the future, this path can be linked to the beachgrounds below,” said Sullivan, adding that the town is working with the Pioneer Valley Planning Commission to create a comprehensive plan for a bicycle and pedestrian pathway.

“It’s all part of our efforts to redevelop the Falls,” DeToma said.

Work by the South Hadley Falls Neighborhood Assoc. is ongoing because it wants people to see what the Falls has to offer. The association has organized many activities, including a block party, a fall cleanup day, a tag sale, a winter luminary, and other social events.

The Falls Fest music festival, held at Beachgrounds Park in July, attracted more than 6,000 visitors, and Sullivan says the area has the potential to become a center for the arts.

“Many people don’t realize what a beautiful piece of earth it is,” he said. “It’s important for visitors to come here because there’s a rule of thumb that, if people visit a place eight times in a year who have not visited before, they are five times more likely to consider it as a place to live and establish a business.”

Other efforts to bring people to the Falls are being undertaken by the Rise of the Falls group. A few months ago, it met with representatives from the Bike/Walk Group, the Tree Committee, the Falls Neighborhood Assoc., and the Board of Health to discuss how to create a map that would showcase the walkability of the neighborhood. The meeting was fruitful, and maps will soon be published that will outline four self-guided walking loops.

Housing plays a vital role in revitalization, and officials are looking at opportunities to create a variety of new units. A property at 1 Canal St. owned by the town is large enough to house 14 units. “We think it would be an ideal place for commuter housing,” Sullivan said.

He explained that this type of housing, typically made up of apartments that contain 400 to 600 square feet, appeals to young people who are living at home but want to live independently while paying off student loans. “It’s an interesting new phenomenon and would be a way of putting more wallets in the Falls,” he said.

A developer wants to build three duplex homes very close together on Ludlow Street, and the former Carew Street School building, owned by Lake Star Development, could also be turned into housing. In addition, the town is working with the Pioneer Valley Planning Commission and the Department of Housing to create a 40R district that would increase the amount of land zoned for dense housing.

Currently, the Falls contains many two- and three-family homes. However, a number of owners had stopped renting their apartments, so last year the town held a symposium to educate them on best practices to attract good tenants.

“It was well-attended, and I think it made a difference,” Sullivan said. “If we can increase the number of people in the Falls, there will be a tipping point that makes it worthwhile for people to invest in small businesses, such as barbershops, dry cleaners, and the traditional services needed in a small village.”

Zoning changes may be needed, but the infrastructure is in place, and several initiatives are in the works, including an application for a grant that would make housing-rehabilitation funds available to qualified Falls homeowners.

The vision of recreating a walkable village will also be boosted, Sullivan said, when Amtrak’s Vermonter passenger train begins running from Springfield to St. Albans, Vt., because people from the Falls will be able to walk to the Holyoke station and go to New York or Montreal.

Another bonus is the fact that the Falls has a number of very successful restaurants, which officials say are an important part of creating a walkable, vibrant neighborhood.

“There is El Guanaco, the Vietnamese restaurant Sok’s, and Ebenezer’s, which has typical pub fare,” said DeToma. “Plus, The Egg & I and the Ruse are South Hadley institutions.”

Hine agreed. “The village has good bones. We just need to add meat and muscles to the skeleton that is there,” he said.

That will happen when new businesses make their home in the area. However, interest in the neighborhood is already beginning to rise. The new Patriot Care Corp. medical-marijuana cultivation center will create 30 jobs, and town officials have been working with other companies considering the location, Sullivan said.

Seemingly unlimited opportunity exists in a five-building complex on Gaylord Street that was once a bustling mill. “It has 270,000 square feet of unoccupied space, and some of it is in move-in condition; it would be ideal for a small manufacturer who needed 20,000 to 30,000 square feet,” Sullivan said, adding that Lake Star Development, which owns the property, is willing to subdivide it.

“We believe the complex is also an ideal area for startups or venture capitalists. One section contains 159,000 square feet that is wide-open space and could be converted to a research facility,” Sullivan said, adding that E Ink moved into a 45,000-square-foot space in a building there three years ago.

Potential also exists in the former library on 27 Bardwell St., and DeToma said residents have suggested ideas for the structure that range from a bed and breakfast to an art gallery.

Efforts are also being made to address neglected properties, and although Sullivan said some owners are less than cooperative, town officials believe their efforts will yield positive results.

“In the short term, it’s very painful as people shake their fists and call us names, but the reality is that, long term, it will result in a better appearance and draw more people who are willing to make investments,” he told BusinessWest.

Sullivan said South Hadley is using many tools to encourage investors, residents, and visitors to view the Falls as a great place to live and work.

“Everything we’re trying to do is inherently contained within the name of the committee, the Rise of the Falls,” he said. “And the area has so much to offer — riverfront property, a very affordable tax rate, and the influence of colleges and urban centers like Chicopee and Holyoke.”

DeToma agreed. “The Falls is getting lots of attention, and it’s going to pay off soon.” 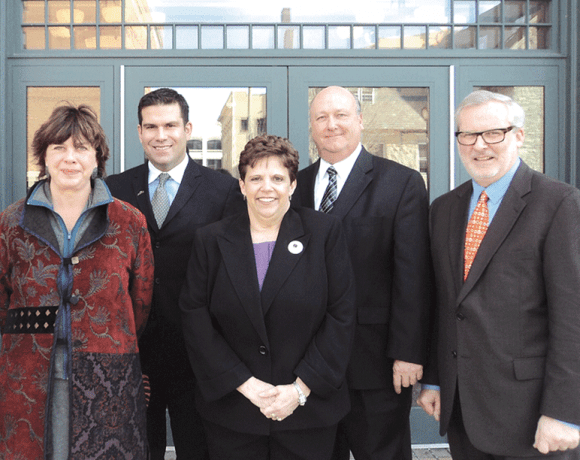 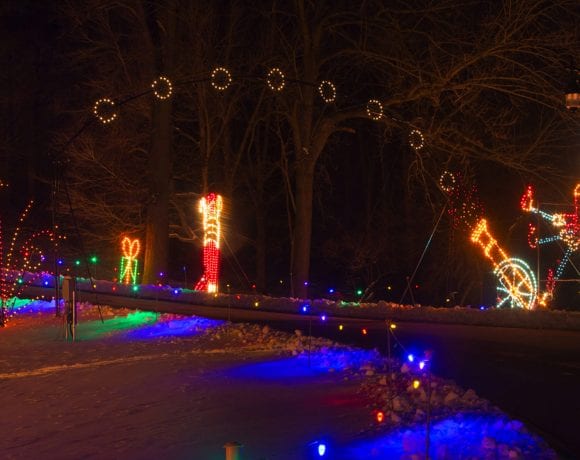 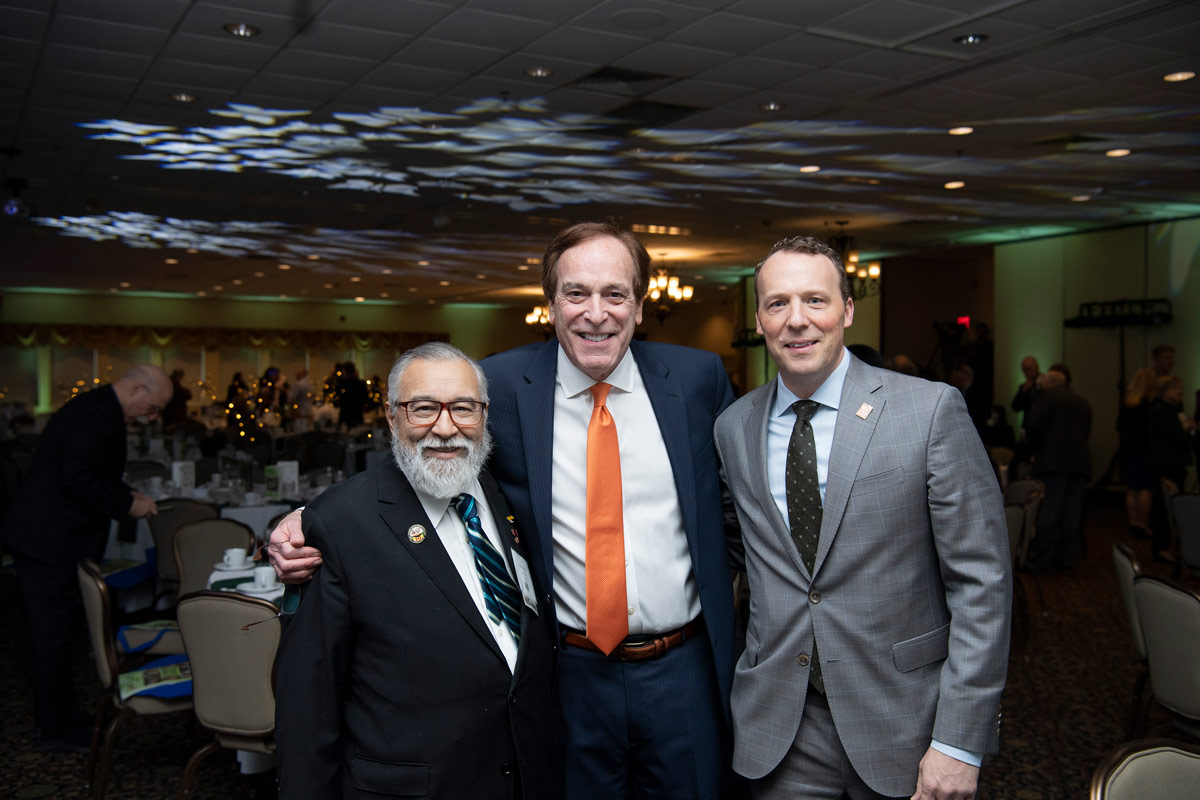 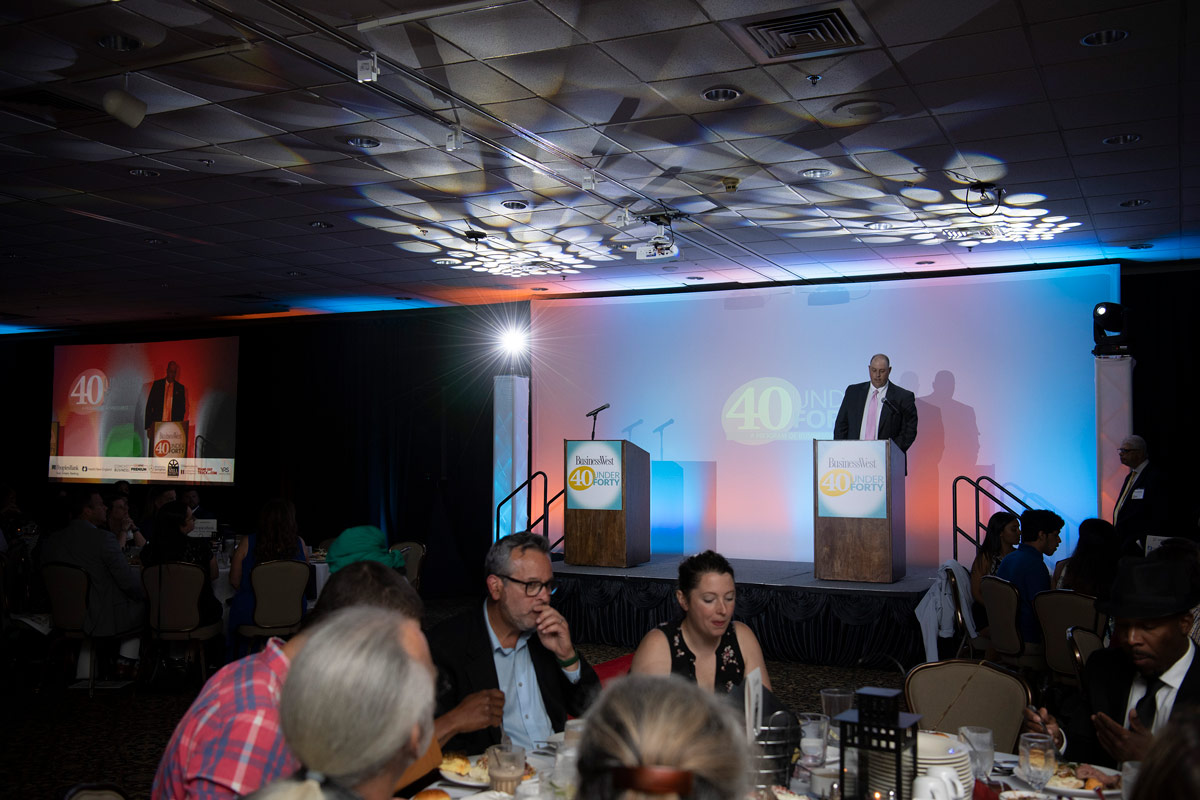 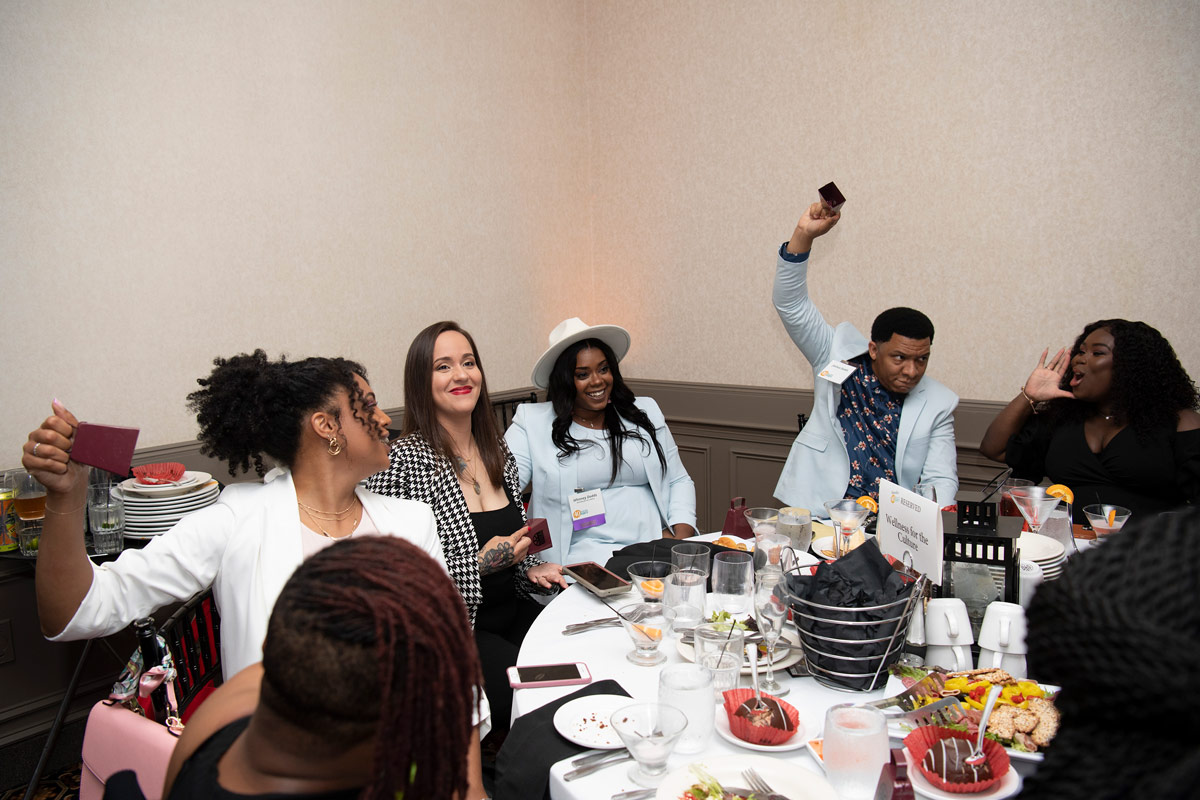 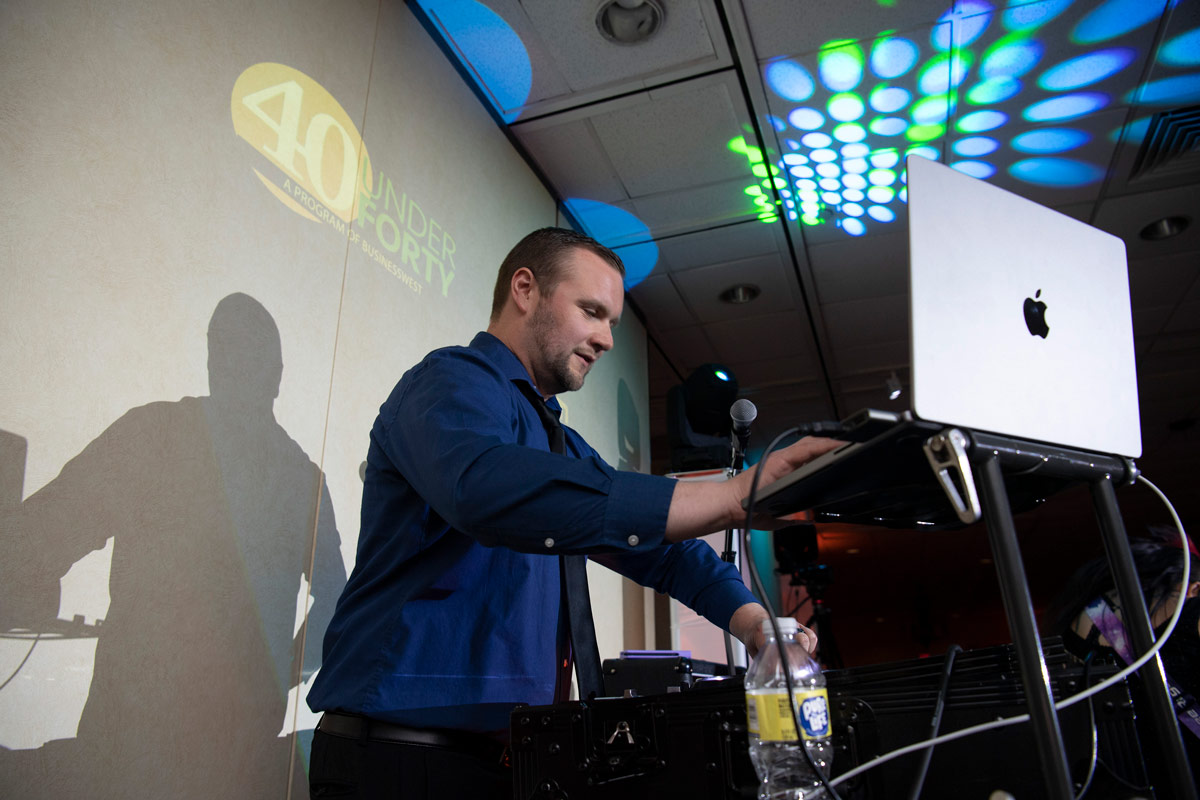