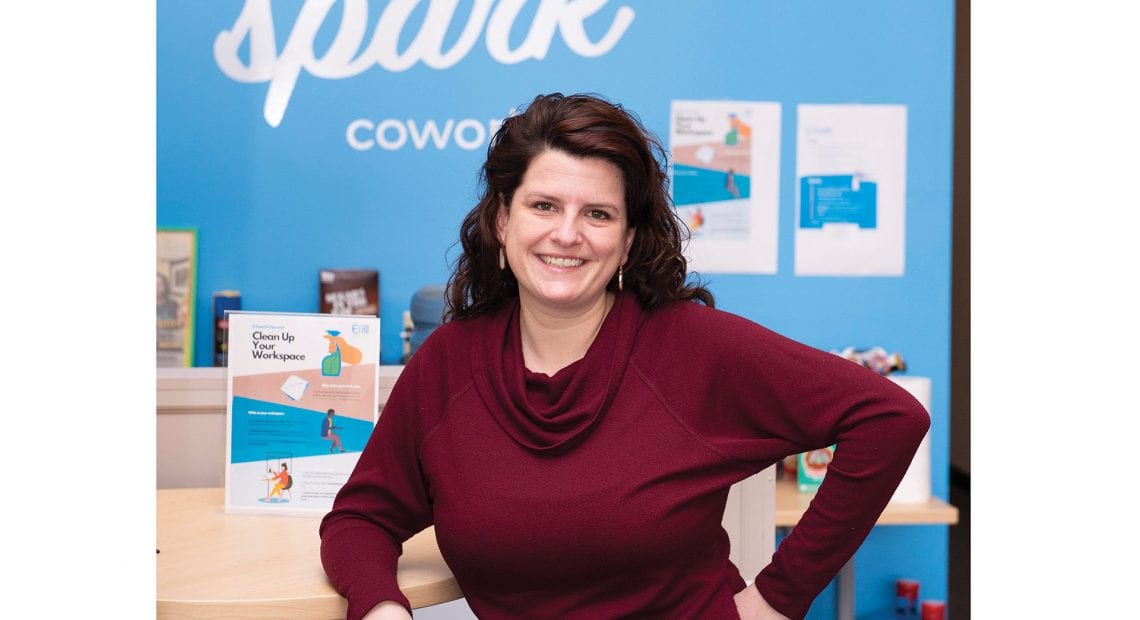 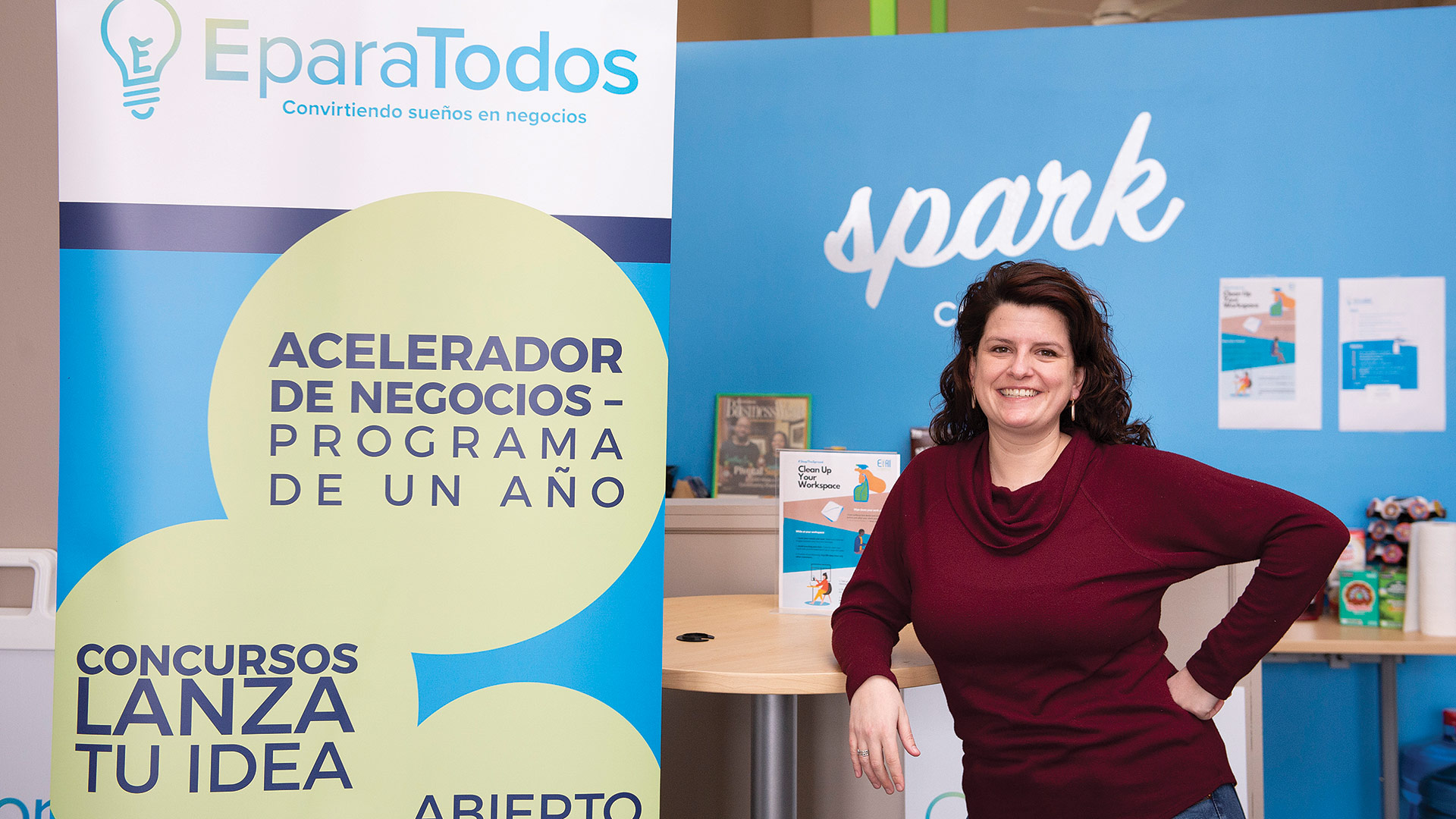 “If your dreams don’t scare you … they are not big enough.”

That’s the quote, attributed to Ellen Johnson Sirleaf, Liberian president, economist, and Nobel Peace Prize winner, that is stenciled onto one of the walls at EforAll Holyoke’s headquarters on High Street, in the heart of the city’s downtown.

Tessa Murphy-Romboletti, executive director of this nonprofit since its inception, chose it for many reasons, but mostly because it resonates with her and also because it accurately sums up entrepreneurship in general, as well as the work that goes on in that facility.

In short, she said, dreams of running a business should scare someone, because there is nothing — as in nothing — easy about getting a venture off the ground … and keeping it airborne.

“Entrepreneurship is so terrifying,” she said. “And when our entrepreneurs come to us, they often don’t have the support of friends or families or big networks telling them to go for these dreams. That’s why we’re here — to tell them that they’re not alone … and that you have to be a little crazy to be an entrepreneur.”

Helping turn dreams into reality is essentially what EforAll is all about. This is a statewide nonprofit with offices in a number of cities with large minority populations and high unemployment rates — like Holyoke. Its MO is to blend education in the many facets of business with mentorship to help entrepreneurs navigate the whitewater they will encounter while getting a venture off the ground, to the next level, or even through a global pandemic (more on that last one later).

It will be many years, perhaps, before a city or a region can accurately gauge the impact of an agency focused on inspiring entrepreneurship and guiding entrepreneurs, but Murphy-Romboletti believes EforAll is already making a difference, especially with the minority population.

“The difference we make is very tangible for people who are seeking new sources of income for their families and themselves, and when you’re an entrepreneur who’s just getting started, it’s really hard to navigate where to go, who to talk to.”

“The difference we make is very tangible for people who are seeking new sources of income for their families and themselves, and when you’re an entrepreneur who’s just getting started, it’s really hard to navigate where to go, who to talk to,” she told BusinessWest. “The model that we use, providing really close mentorship, makes such a difference — you don’t have to go through the process alone.”

Her sentiments are backed up by some of those who have found their way to EforAll and been part of one of its many accelerator cohorts. People like Sandra Rubio.

Years ago, she started baking cakes for family members because she wasn’t happy with the quality and price of what she found in area stores. Soon, she was making cakes and other items for friends, neighbors, and even total strangers who had been exposed to her work. And her success promoted her to launch Totally Baked 413, which will soon open a location in the Holyoke Transit Center on Maple Street. 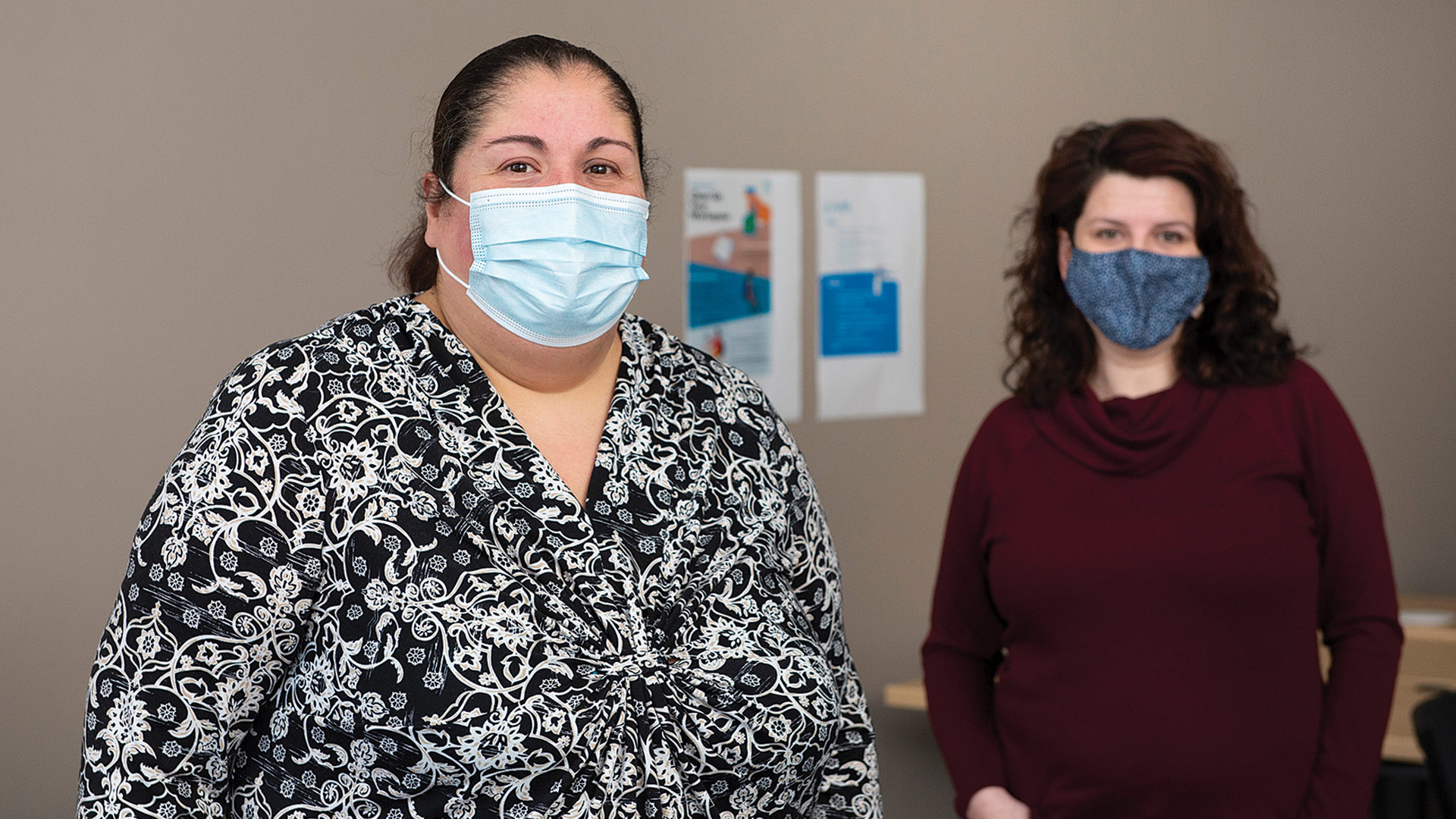 Sandra Rubio credits EforAll and its director, Tessa Murphy-Romboletti, with helping her get her venture, Totally Baked 413, off the ground.

She credits EforAll with helping her make the leap from part-time activity to full-time enterprise — but not leap until she was ready and not make too big a leap too soon. She also credits her mentors and Murphy-Romboletti with getting her through those times when she was tempted to let the dream die.

“There were times when I just wanted to give up, say ‘forget it,’ and go back to work,” she recalled. “But then, I would meet with my mentors, meet with my class, and it got me right back on track — it gave me the push I needed to press on.”

And people like Jailyne Torres, who launched Shyguns, a creative clothing brand and seller of vintage clothing. She said she took part in the Spanish-speaking accelerator, called EsparaTodos, and credited EforAll with helping her gain consistency and take a concept she conceived when she was only 16 years old and make it into a business.

“I always had the idea, the concept, but I never really knew how to make it actually make it a brand,” she said. “But EsparaTodos helped me with all that.”

Such comments explain why EforAll, while still small and emerging, if you will, like the businesses it mentors, is already a Difference Maker in the community it serves.

As she talked with BusinessWest at EforAll’s facility, Murphy Romboletti said being there elicited a number of different emotions.

Indeed, while she said it always feels good to be in that space, COVID-19 has made the visits far more infrequent, and it has brought what is often an eerie quiet to a place that was always full of people and energy. The co-working space is now unused for safety reasons, and there are far fewer meetings and activities taking place there, with most programs carried out virtually. All this is made more frustrating by the fact that it took more than a year of hard work to secure the space and get it ready for its opening in the fall of 2019, only to have the world change and the space go mostly dark just a few months later.

“For those first couple of weeks when I would come back, it was like, ‘oh, man, this is tortuous — this is a hard pill to swallow,’” she noted before quickly taking the conversation in a different, more poignant direction. “The irony is that’s exactly what so many of my entrepreneurs were feeling; a lot of them, especially those in the cohort that we graduated that March, were just coming into the world as new entrepreneurs, and the world said, ‘hold on … we’ve got some other plans.’

“So, during the pandemic, we kind of became therapists for a while, listening to people’s concerns and what they needed help with, and trying to connect them with all the resources that were out there,” she went on. “But at the end of the day, there was so much that was out of our control; we tried to be as supportive as we could and continue to provide a community for them so they could survive this.”

COVID has changed some things, certainly, but when you get right down to it, EforAll Holyoke has always been about providing a community and helping entrepreneurs not only survive, but thrive. 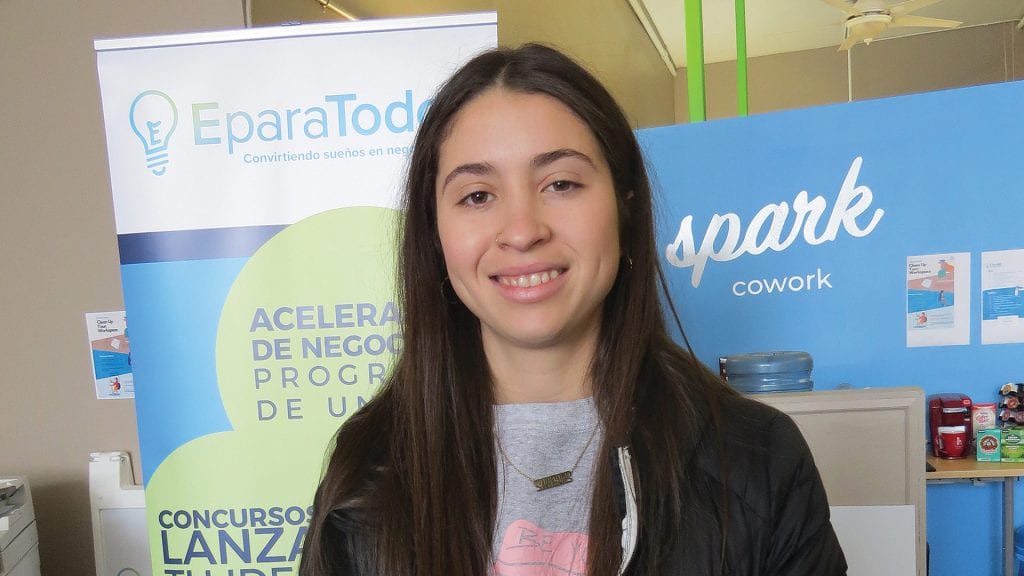 Jailyne Torres says EforAll has been instrumental in helping her take Shyguns to the next level.

Launched five years ago as SPARK, the agency quickly became an important part of the region’s growing entrepreneurship ecosystem. In 2018, it affiliated with EforAll, short for Entrepreneurship for All, a network that now boasts eight offices across the state, including the most recent, in the Berkshires.

Like many of the other offices, the one in Holyoke now conducts accelerator programs in both English and Spanish (EsparaTodos), and graduates four cohorts of entrepreneurs each year, two in the spring and two in the fall.

Like most accelerators, these XX-week programs are designed to educate participants on the many aspects of starting and operating a business — everything from writing and updating a business plan to working with the media — while also connecting them with mentors who can impart their wisdom and first-hand experiences.

When asked what it’s like, Rubio said simply, “intense.” By that, she was referring to everything from the classwork to the back and forth with her mentors. And that intensity helped her persevere through the challenges of getting a plan in place, finding and readying the site for her bakery and café, and getting the doors open.

“So, during the pandemic, we kind of became therapists for a while, listening to people’s concerns and what they needed help with, and trying to connect them with all the resources that were out there. But at the end of the day, there was so much that was out of our control; we tried to be as supportive as we could and continue to provide a community for them so they could survive this.”

“Every time I was close to saying, ‘I’m done,’ they would say, ‘you’re on the right track; keep going,’” she recalled. “And we would keep going.”

Rosario, speaking in English that is, like his bottom line, improving consistently from year to year, said EforAll has helped him make the big leap from working for someone else to working for himself.

He told BusinessWest that those at EforAll helped connect him with sources of capital, including banks and Common Capital, to secure loans that have enabled him to buy the equipment needed to handle more — and larger — jobs, including a trailer and a truck. And he’s hired his first employee, a truck driver.

“If it wasn’t for EforAll, I wouldn’t be where I am today,” he said, adding that the agency and the mentors assigned to him have helped with all facets of running a business, but especially with making those all-important connections to professionals, capital, and potential clients.

Torres agreed. She said EforAll has helped her with aspects of her business that people don’t think about when they’re focused on an idea and maybe a brand. Things like data entry, pricing, marketing, and “allowing transformation to happen.”

“When I started the project, it was based on the creative clothing part,” she explained. “And then, I was able to add second-hand clothing, and not limit what the future might bring.”

That’s certainly another colorful and poignant way of summing up what EforAll does for those who participate in its programs.

Here’s the full quote attributed to Ellen Johnson Sirleaf: “The size of your dreams must always exceed your current capacity to achieve them. If your dreams don’t scare you, they are not big enough.”

Most people have the capacity to dream as big as Johnson Sirleaf believes they should. But not everyone has what it takes to make those dreams become reality. Those who have entrepreneurial ambitions and spirit are among those who can.

But even such driven individuals can’t go it alone. EforAll exists to make sure they don’t have to. And that’s why it’s a true Difference Maker in Holyoke — and beyond. 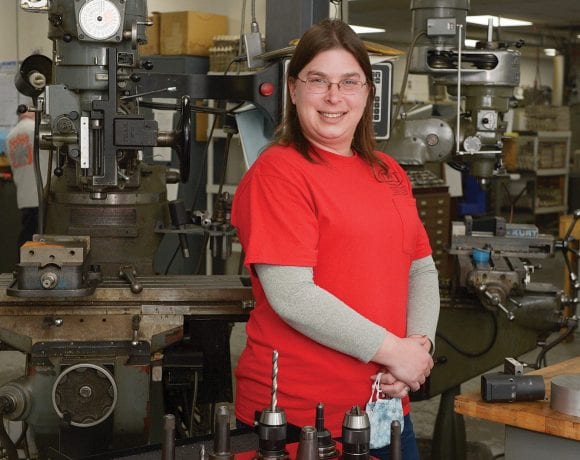 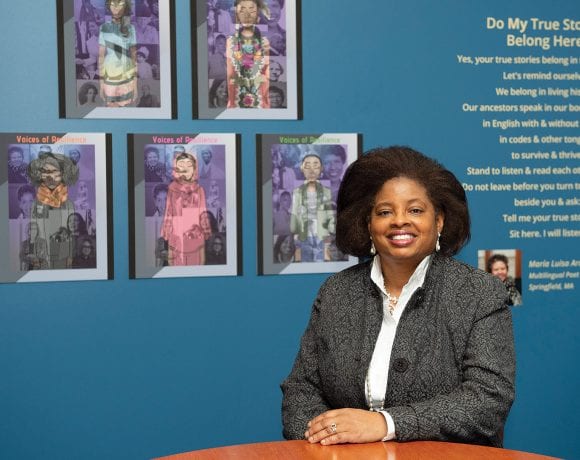