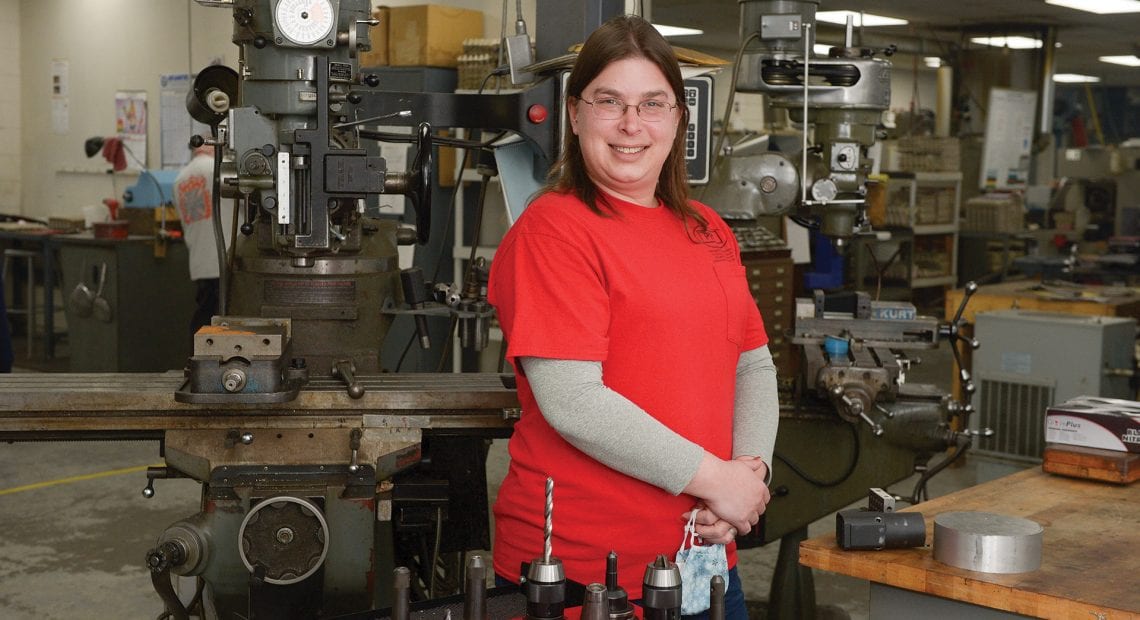 She Has in Many Ways Become the Face of Manufacturing Locally 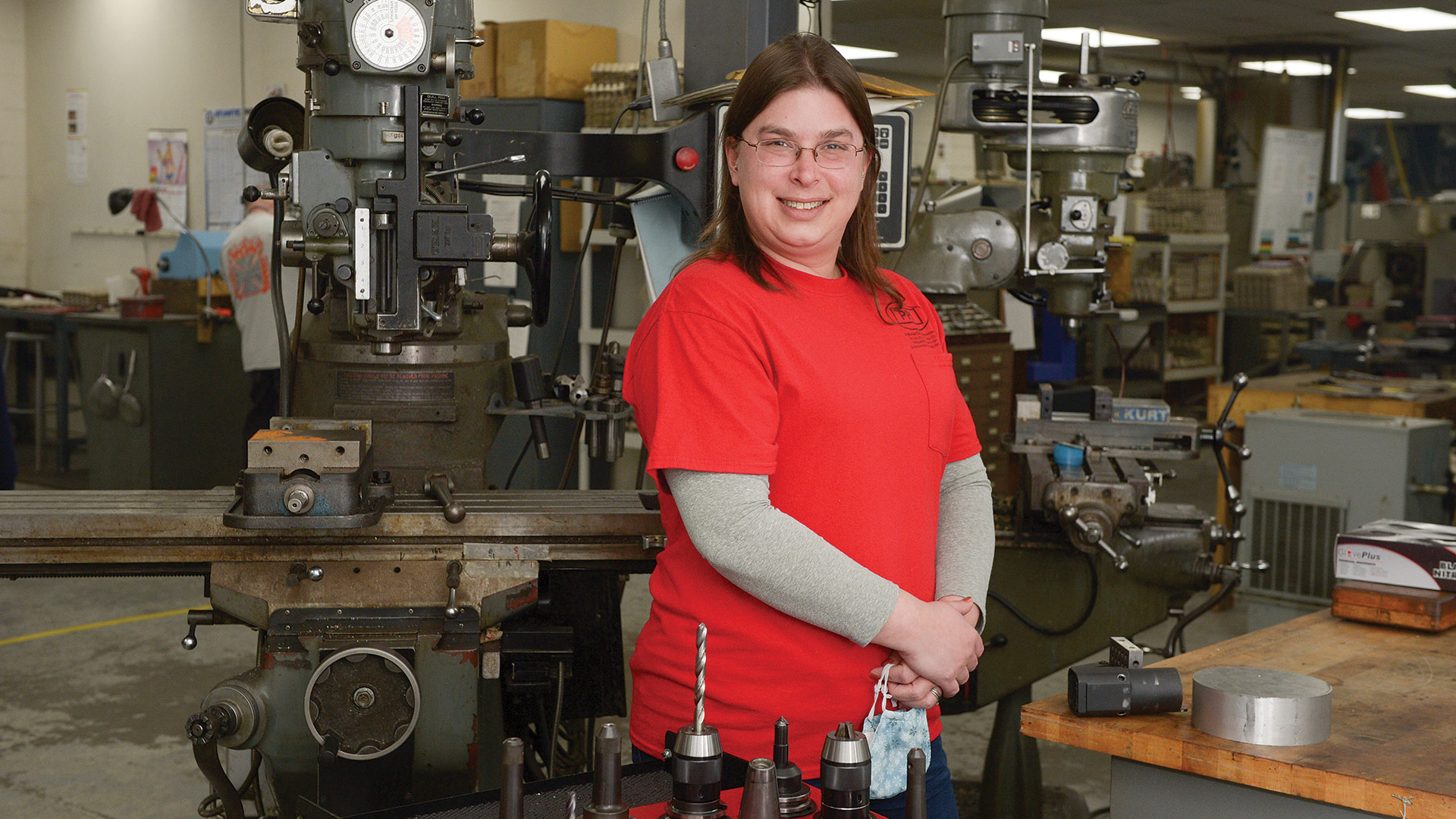 Because … it’s about Dzhokhar Tsarnaev, one of the two brothers who perpetrated those heinous crimes almost eight years ago now. More to the point, though, it’s about the role her company played in eventually apprehending him.

Indeed, Tsarnaev was found hiding in a boat in a backyard in Watertown, and he was discovered through the use of a thermal-imaging camera in a police helicopter flying over the area. Carlson’s company, Westfield-based Peerless Precision, makes several components for that camera, including one for the cryogenic cooling system that ensures that the camera doesn’t overheat during use.

As she held one up for BusinessWest to see, she said just showing people the part isn’t nearly as impactful as trying to explain what it’s used for — or, in this case, how it can play a significant role in writing history.

That’s why she tells the Boston Marathon bomber story often, although she admits that its days might soon be numbered. That’s because she usually tells it to young people in the hopes that they might be intrigued enough by it to perhaps pursue a career in precision manufacturing. And by young, she means high-school age, and preferably middle-school age. And those in that latter category are now, or soon will be, too young to really remember the 2013 bombing and its aftermath.

“I want to make sure that kids, and adults who are looking for another career option, are aware of what we do in Western Mass., and they know about the viability of a career in manufacturing and what it has to offer.”

But Carlson has other stories — perhaps not as dramatic or crystalizing. All of them are designed to show what precision manufacturing is all about, and also how companies in this area provide parts for helicopters, fighter jets and bombers, the Space Shuttle, medical devices, automobiles, submarines, and so much more. She often borrows the line used often by Rick Sullivan, now the president and CEO of the Western Mass. Economic Development Council but formerly mayor of Westfield, who would say that, if you saw a plane flying over the city, there’s a good chance that tens of thousands of dollars worth of its parts were made in the city.

Other stories talk about how someone manufacturing these parts can make a very good living and have a job with real security — yes, even in the wake of a global pandemic. And she tells them often, too. 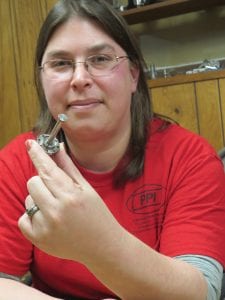 Kristin Carlson holds up one of the parts her company, Peerless Precision, makes for thermal-imaging cameras, like the one used to locate one of the Boston Marathon bombers.

And then there’s her story — a 38-year-old woman now managing this precision manufacturer. We’ll get to that one in a minute. These stories help explain why Carlson has been named a Difference Maker for 2021. Indeed, while she has helped grow the company since she took over for her father, Larry Maier, as he battled and eventually succumbed to cancer, she has made an even bigger mark — on a regional and now national stage — in the ongoing effort to educate people about what gets made here and also about careers in manufacturing, thus addressing ongoing issues involving workforce and a skills gap.

“I want to make sure that kids, and adults who are looking for another career option, are aware of what we do in Western Mass.,” she said, “and they know about the viability of a career in manufacturing and what it has to offer.”

In a field where complaints about these issues have been going on for decades involving generations of shop owners and managers, she has distinguished herself by going beyond complaining. Well beyond. In fact, in many ways, she has become the face of manufacturing in Western Mass. — a much different face than has ever been associated with this sector locally.

“Instead of sitting idly by and talking and complaining, I wanted to do something about it,” said Carlson, who was recently appointed to the state’s Workforce Training Advisory Board and also sits on the National Tooling and Machining Association’s AMPED (Advanced Manufacturing Practices and Educational Development) Board.

And while there’s still much work to be done, she has, indeed, done something about it, and that’s why she’s a Difference Maker for 2021.

Despite everything you’ve read already in this piece about manufacturing, what a good career it is, and how Carlson has thrived in it, she readily admits she had to be talked into coming back to this this region and Peerless Precision after her father got sick.

And it took a lot of talk.

She was living in San Diego at the time, working for a fire-alarm contractor, handling everything from inside sales to building websites to being the runner to go to City Hall and get the fire-alarm building permits for new construction.

In 2009, her father was diagnosed with colon cancer. “At the time, he asked me … if something ever happened, would I come home from California and help my mom either decide to keep the company or sell it,” she recalled. “My dad always wanted me to be doing what I’m doing now, and I was pretty much in a place at that point in my life where I needed to decide what my path was going to be on my own; I didn’t want someone else to define that for me.

“Because he was stubborn and I’m just as stubborn as he was, I fought what he wanted tooth and nail until it came time for me to make that decision,” she went on. “So when he asked me if I would come home if something happened, I said ‘yes.’” 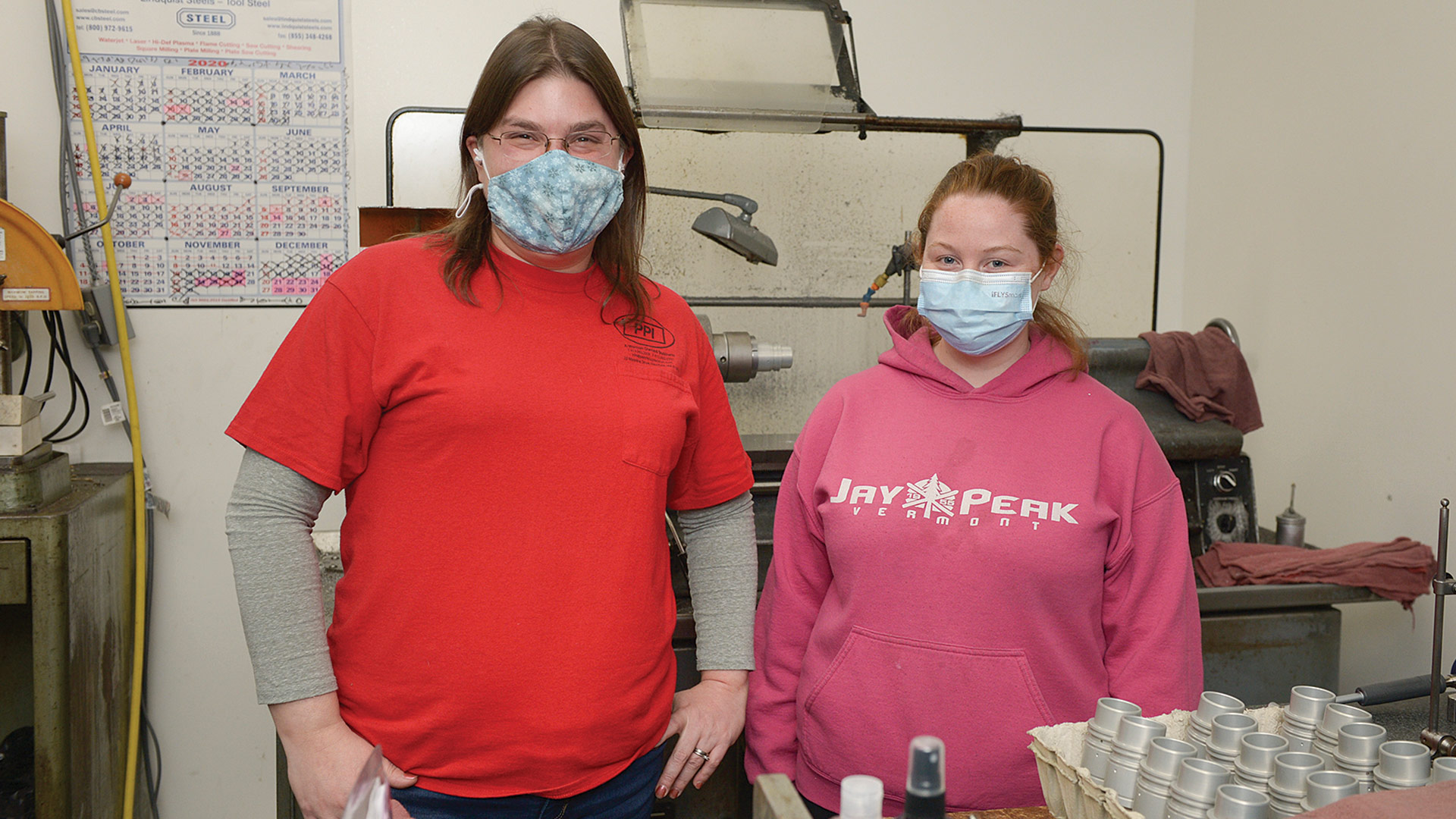 Kristin Carlson, seen here with Peerless Precision machinist Kaitlyn Fricke, says progress has been made to inspire women to enter the manufacturing field, but more work must be done.

Something did happen. After undergoing surgery and chemotherapy and eventually earning a clean bill of health, her father’s cancer not only returned but spread to other parts of his body. And Carlson kept her promise to her dad, even if he didn’t remember her making that promise.

That was in 2012. Since that time, Carlson has verified the faith her father had her, establishing herself not only at the company — transitions such as these are rarely seamless — but also in the industry, and especially in the broad realm of helping to educate people (and especially young people) about precision manufacturing as a career path.

Such efforts have been going on for decades, and Carlson notes that, in many respects, she is simply carrying on the work of her father, who was extremely active with workforce initiatives in this sector. Indeed, the two of them share what could only be called a passion for such work.

Much of her work involves debunking myths, or at least long-standing beliefs. There are many of them, and they range from those concerning the death of manufacturing in this region (it’s not what it was 30 or 40 years ago, to be sure, but it’s not dead) to the presumption that women can’t or shouldn’t get into this field, to the opinion that one has to go to college to succeed in life.

“I was pretty much in a place at that point in my life where I needed to decide what my path was going to be on my own; I didn’t want someone else to define that for me.”

Carlson, who went to college because she was told she needed to, is working on all these fronts simultaneously. She confronts the problem with statistics, with stories — like the one about the Boston Marathon bomber — and sometimes just by showing up in a room.

Indeed, as a woman not just in this industry, but one leading a company and sitting on regional and national boards, she has become an effective role model, or ‘exhibit A,’ if you will, when it comes to everything she talks about. As in everything.

“For a kid whose father had bought a machine shop and was pushed to go to college when I’m better at hands-on things … I wish I had been given different options,” she told BusinessWest. “My parents told me that I couldn’t make anything of myself if I didn’t have a college degree; that’s not a good message, but it’s also the message that was being pushed across the board back then — and still, today.” 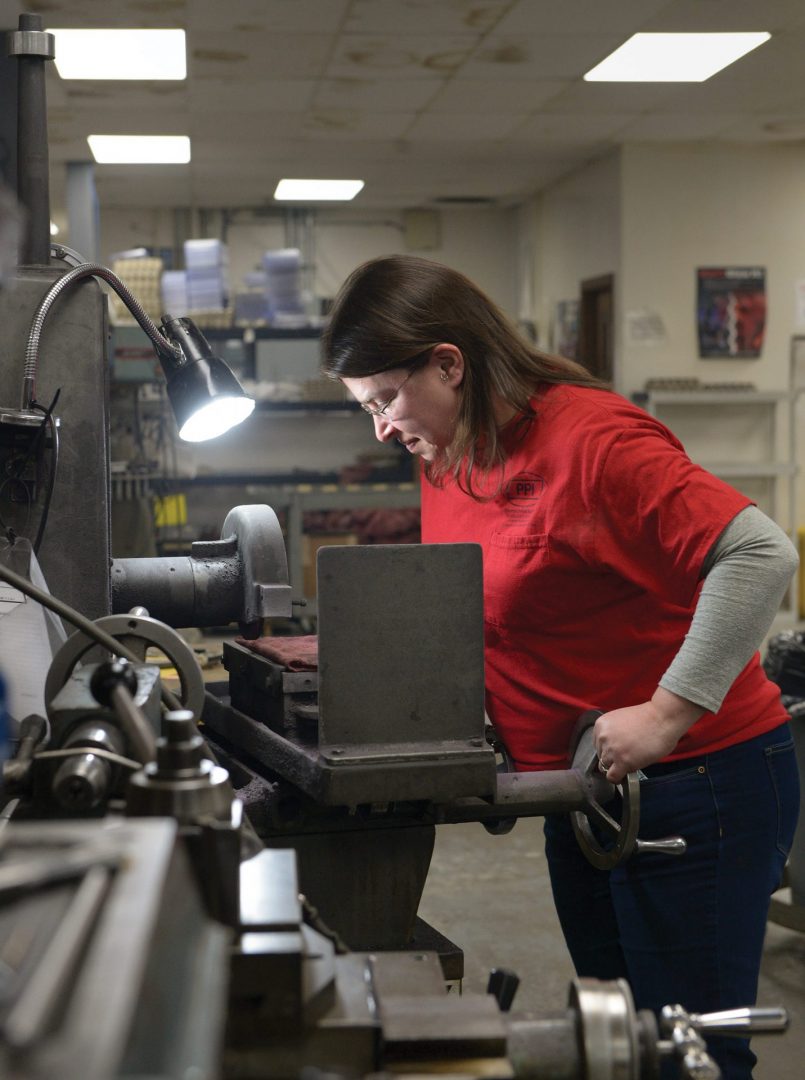 Like her father, Larry Maier, before her, Kristin Carlson has made workforce development a passion and a big part of her life and work.

While the pandemic is keeping people from touring the facilities at Peerless Precision in person, there are still virtual visits, where young people can meet not only Carlson, but her pit bull, Bruno. They can also see six women on the manufacturing floor (years ago, they would only have seen them in the front office or shipping and receiving). And they can see parts like the one that goes into the thermal-imaging camera that captured Dzhokhar Tsarnaev in that boat.

“My parents told me that I couldn’t make anything of myself if I didn’t have a college degree; that’s not a good message, but it’s also the message that was being pushed across the board back then — and still, today.”

And they can hear Carlson talk about other things made in this region — from toys at LEGO and Cartamundi to ketchup bottles at Meredith Springfield to coolers at Pelican Products. Overall, it’s a powerful message, she said, but one that needs to be reinforced and told to new audiences every year, several times a year, if possible. That’s because those old myths, those old perceptions, die hard.

Parts of the Whole

Before ever telling the Boston Marathon bomber story, Carlson wanted to make sure she had her facts straight.

“When I saw our customer’s logo on that camera shot, I called him right away and said, ‘do you think there’s a possibility that that part in the camera that found the bomber is from our shop?’ — and he said ‘absolutely,’” she recalled, adding that additional research verified what she suspected.

She’s told the story many times since, because it conveys what many people don’t know, but should — that the precision-machining sector in this region is making a difference in the lives of people across the country.

Likewise, Carlson is making a difference as well, carrying on the work of her father in so many ways, and, as noted, becoming the face — or at least one important, perhaps unexpected face — in a sector with a rich history and, thanks to her efforts, perhaps an equally rich future. 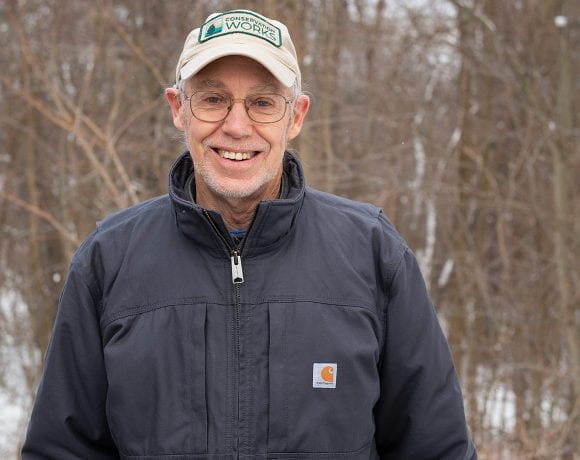 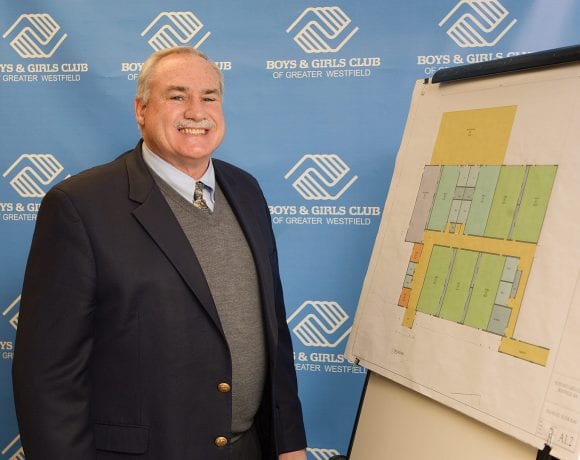 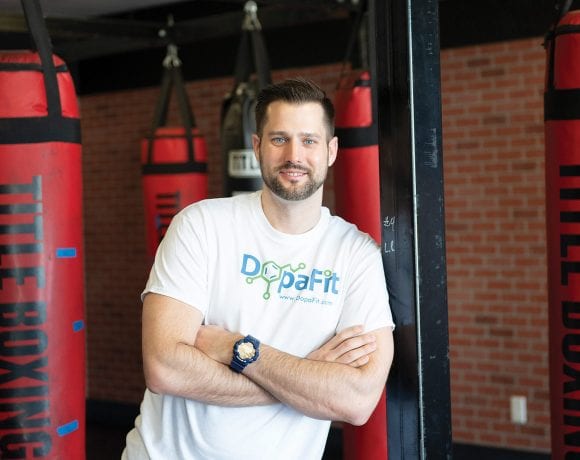