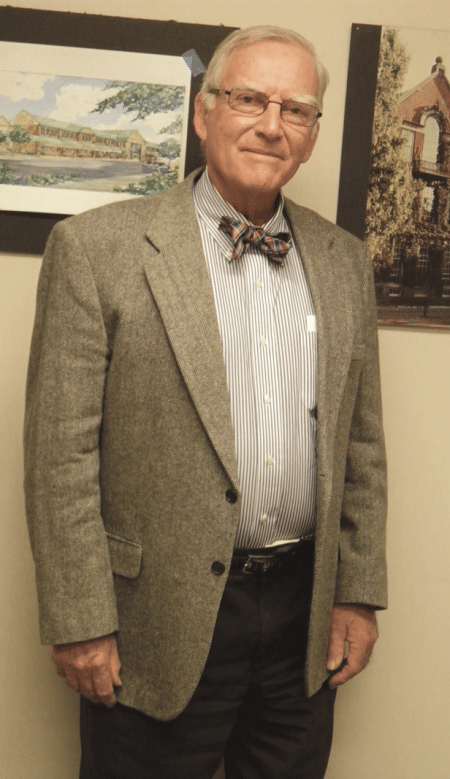 Several years ago, William Gillen changed his business model to one where architects work independently but market themselves as a team.

When William Gillen created Gillen Collaborative Architects Inc. in Amherst, he based his business model on decades of honed experience. “There is no payroll here, so there is no pressure to generate a bill. If one of us wants to spend 24 hours working with a group, we do it,” he said, noting that the two registered architects under his umbrella are self-employed and can work independently on their own projects, or collaboratively as a group, while sharing resources and information from their own areas of expertise.

The trio, which includes Gillen, Carol Vincze, and John Krifka, have more than 100 years of combined experience, and venture into territory that most architects don’t have the time or interest to explore.

For example, when Krifka began working on a contract to renovate the Berkshire Family and Probate Court in Pittsfield and restore its north façade, he came up with an idea to create a documentary that would benefit the public, the city, the state, and groups interested in historic restoration.

After he spoke to city officials about obtaining a grant to pay for a detailed video production of the restoration and renovation, UMass graduate student John Dickson heard about it from the Pittsfield Historical Commission and received permission to document the work as part of his thesis. In addition to a written document, he created a seven-minute video with Pittsfield Community Television titled “Conserving the Old Berkshire Athenaeum,” which can be seen on YouTube.

Since the work on the courthouse is not yet complete, he is also working on another version, which he expects will be at least an hour in length. The finished product will be shown on public-access TV and will serve as a tribute to the artisans who created the 1876 building as well as those who painstakingly matched intricate patterns on the crumbling stone.

“City officials feared the project would disrupt parking and traffic to and from local business, so the idea was born partially to help to help establish liaisons,” Krifka said, explaining that he met with the Town Council and businesses owners to promote the video because he believed it would generate a lot of interest. “Stone structures aren’t built anymore, and I knew this was something that wouldn’t happen in Pittsfield again, so I really wanted it to succeed.”

A photograph was taken of every stone that was removed from the building, and Dickson interviewed a number of artisans about their restoration techniques, including a stained-glass specialist who described the process of reconditioning and replacing missing glass from original windows.

“People will learn many interesting things from the video, such as the fact that you can take a damaged stone with a decorative pattern and build up the missing part with modern materials,” Krifka said, adding that Dickson shared his work with the Western Mass. Historical Commission Coalition at its meeting in July.

“Bill, Carol, and I like to generate ideas,” he added. “But if we were just employees, it wouldn’t be in our interest to do things like this.” 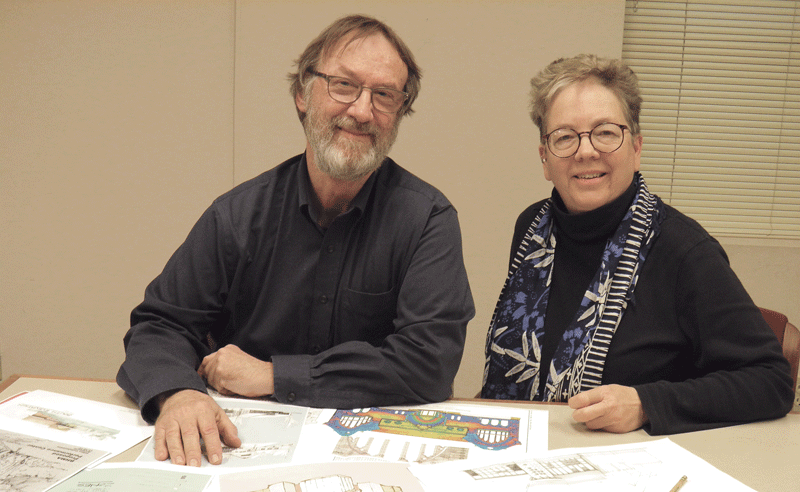 Carol Vincze (right, with John Krifka) says the freedom she has at Gillen Collaborative Architects serves her well in her work.

Vincze agreed and said sharing space with co-workers is a growing trend that allows people to socialize while working independently or in collaboration with each other.

She explained that the freedom she has at Gillen Collaborative Architects served her well when she redesigned the Amherst Survival Center. It serves more than 4,400 needy individuals each year, and Vincze was determined to see firsthand how it used its existing space before she began forming ideas for a design.

“I visited the center at least six times and ate lunch there. I also watched people come and go, and interviewed members of the staff who told me it was important to build a feeling of community,” Vincze said. “They thought they needed six rooms for activities, but it quickly became clear which areas could be combined.”

As a result, she was able to create a workable design, assist with the client’s fund-raising efforts, oversee the bidding and construction administration, and do everything else required to finish the project on time and on budget.

Gillen, who farms 20 acres and owns several real-estate firms in addition to his architectural company, changed his business name several times and had a number of partners in the course of more than five decades of work.

In 1969, the Boston architectural firm that employed him asked him to move to Amherst to take over a satellite office, and all went well until the recession of 1975.

“A moratorium was placed on most state projects, and it knocked the wind out of our sails,” he recalled. “There was not enough work for the architectural firm to keep its Amherst office, so they allowed me to take it over.”

He named his new business William Gillen Architects, finished the projects started by his previous employer, and began paying the employees’ salaries.

A short time later, he formed a partnership with architects John Kuhn, Christopher Riddle, and Dennis Gray, and the business was renamed Gillen, Kuhn, Riddle and Gray Inc.

The firm grew quickly, and although Kuhn and Riddle left in 1988, Gillen and Gray stayed together and kept 10 of 30 employees. In the early ’90s, they were joined by former classmate Kevin Omarah, and the firm’s name changed to Gillen, Gray and Omarah Architects Inc.

“But Omarah died, and Gray moved to Salem, and I became Gillen Architects again; by that time, I knew I needed to be more than a one-man band to do sizeable projects,” Gillen said, explaining that it is risky for a client to do a project with only one architect.

In the late ’90s, Kathleen Ford joined him from New York City, and Ford Gillen Architects was born. The duo worked together for a decade, but after she left and Gillen found himself on his own again, he began collaborating with Vincze because he needed help to complete some large state projects.

“Several years ago, I changed my business name and model again to better reflect what I was doing and market more effectively,” Gillen said, adding that he formed a collaborative because he wanted to eliminate the stress of constantly having to meet payroll. “I created a model where we are all independent, but can also work together and market ourselves as a group.”

However, each of the architects has their own niche.

Gillen specializes in historic preservation and unpretentious architecture that is harmonious with a neighborhood. Meanwhile, Vincze is LEED-certified, and Krifka has done a number of institutional and commercial projects for nonprofit organizations.

Gillen provides space inside a building he owns on Main Street as well as a full-time receptionist who acts as an administrative manager and does all of the paperwork.

“We share resources and networking, but since each architect has their own business, there is no set time for any of us to arrive or leave. But we’ve been very fortunate; architecture is very competitive, and we’ve been awarded several half-million-dollar contracts,” he told BusinessWest, outlining projects that include renovations and updates to buildings at UMass Amherst and county courthouses.

A year ago, the trio was hired to create a master plan for St. John’s Episcopal Church in Northampton, which is located in the Elm Street Historic District.

“We marketed ourselves as a group, but Carol is the project manager,” Gillen said, noting that the renovation plan is in the design stage and includes adding an elevator, a social hall, and office space.

“We work really well with committees made up of lay people. In fact, we spend more time figuring out what people need and how much it will cost than any architectural firm I have ever worked for,” she said, adding that she is also involved with a design for a new, large mixed-use building in South Amherst that is under construction.

Gillen’s project history is storied and includes the conversion of the former Northampton railroad station in 1980 into restaurants, as well as the 2002 design of the Strong Avenue shops and condominiums in Northampton, which won accolades from the city. Meanwhile, Krifla’s previous employment included stints with three architectural firms in New York.

Their combined experience has served them well. In fact, over the past three years, the trio has undertaken at least 100 projects.

He added that he and designer Lisa Lindgren, who has also begun working collaboratively with him, are creating plans for a house in Hadley.

Vincze said one thing that sets Gillen Collaborative Architects apart from other firms is that the architects see their projects through from start to finish.

“We maintain continuity with our clients from the time of the first interview to opening-day ribbon-cutting ceremonies and the years beyond,” she told BusinessWest.

Gillen added that the architects take pride in being accessible, even when it involves little or no notice. “Yesterday at 7:48 a.m., a masonry contractor called me and asked if I could meet him at St. John’s in 40 minutes. I wasn’t dressed, but I got there on time. Then I was told a general contractor was going to remove the staging on the courthouse in Pittsfield over the weekend and needed our architects to take a close look at it, so I volunteered to go there on Friday so the contractor could meet his schedule.

“The bottom line,” he stressed, “is that, if one person is successful, we are all successful.”

The New Era of Export Compliance 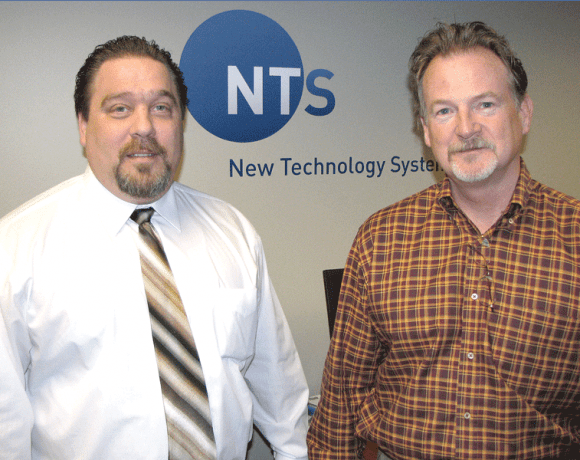