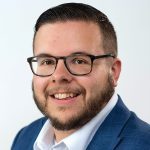 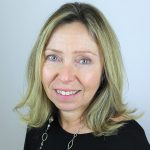 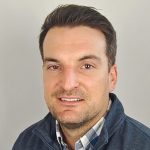 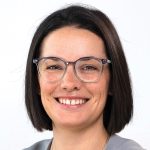 bankESB recently promoted three team members — Nathaniel Munson to vice president, commercial credit officer; Lisa Phakos to compliance officer; and David Viamari to assistant vice president, assistant controller — and welcomed Cara Cusson to the Marketing Department as its Marketing Communications manager. Munson joined bankESB in 2018 as portfolio manager and was promoted to assistant vice president, portfolio manager in 2020. He is responsible for managing credit analysts and portfolio managers in underwriting new loans. Prior to bankESB, he was with Westfield Bank for six years, most recently as senior credit analyst. He holds a bachelor’s degree in business administration from Western New England University and a certificate from the New England School for Financial Studies. Munson is an active member of Mountain View Baptist Church in Holyoke, currently serving as a trustee and Sunday school director. Phakos joined bankESB in 2001 as assistant branch manager. She moved to the Audit Department as staff auditor in 2006 and was promoted to compliance specialist in 2018. She is responsible for implementing and managing the COSO internal-control frameworks across the Hometown Financial Group family of banks, which includes bankESB, bankHometown, and Abington Bank. She is also responsible for compliance reviews of all marketing and advertising materials, manages the Compliance Department monitoring program, and completes regular compliance monitoring and audits. Phakos attended the ABA Foundational Compliance School and the Mass Bankers Compliance Academy and serves on the board of governors of the Western Mass. Compliance Assoc. She is also a board member and secretary for the Nonotuck Valley Hockey Assoc. Viamari joined bankESB in 2020 as accounting officer. Prior to bankESB, he was employed by Wolf & Co., P.C. for 10 years, most recently as senior auditor. He oversees general finance and accounts payable for bankESB and financial and regulatory reporting for the Hometown Financial Group family of banks. Viamari holds bachelor’s and master’s degrees in accounting from UMass Amherst and is a member of the Boston chapter of the Financial Managers Society and a finance committee member for the Lathrop Home. Cusson will be responsible for strategic marketing communication plans and programs, managing and directing the company’s sales material and promotional inventory program, managing communications-related projects and priorities, and managing the promotion of sponsorships and donations company-wide for bankESB and across the member banks of its parent company, Hometown Financial Group. Prior to joining bankESB, Cusson was the director of Planning and Special Projects in the University Relations Department at UMass Amherst and before that was the production manager in the Communications Office at Deerfield Academy. She holds a bachelor’s degree in communication from UMass Amherst and a master’s degree in corporate and organizational communication from Northeastern University. She is a volunteer for Safe Passage. 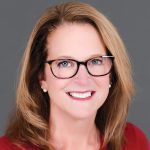 Massachusetts College of Liberal Arts (MCLA) announced that Brenda Burdick, director of Strategic Communications at General Dynamics Mission Systems, has been elected to the role of chair of the board of trustees for the college. Gov. Charlie Baker appointed Burdick to the board in 2018, and she was reappointed for a second five-year appointment this summer. Prior to her election, Burdick had served as chair of the student affairs committee and academic affairs committee as well as vice chair of the board. She succeeds Mohan Boodram as chair of the board. Burdick started her career at General Dynamics in Pittsfield in 1995 before becoming the Marketing and Public Relations manager in 2002, and later adopting the role of senior manager of Marketing and Public Relations in 2014. Before joining General Dynamics, Burdick was director of Sales and Marketing for Swift River Inn in Cummington and was both a Sales manager and a Public Relations assistant for Canyon Ranch in Lenox. She also served as a member of the Berkshire United Way board of directors from 2008 to 2017, which included one two-year team as chairperson and two two-year terms as vice chairperson. Burdick holds a bachelor’s degree in business administration with a double major in business communications and marketing from Bryant University. She currently serves on 1Berkshire’s executive committee as the vice chair and has been with the organization since 2009. 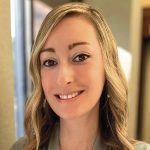 Florence Bank recently presented its 2022 Community Support Award to Linda Bushey, a mortgage specialist in the main office in Florence. The Community Support Award was established by the bank in 1997 as a means of formally recognizing employees who are active in the community and give their personal and professional time to local nonprofit organizations. Each year, the award recipient can select an organization of his or her choice, and the bank will donate $500 to that organization. Bushey chose to support two organizations, so $250 will be granted to the Hampshire, Franklin and Hampden Agricultural Society and Three County Fair, which promote agricultural education and scientific agriculture, and $250 will be granted to the Greater Northampton St. Patrick’s Committee Inc. Bushey was hired at Florence Bank in 1994 as a teller and held a variety of positions before becoming a senior mortgage processor. She is now a mortgage specialist with 32 years of banking experience. She received the Florence Bank President’s Award for outstanding service in 2001 and is a 2017 recipient of the inaugural Leonard Von Flatern Jr. Volunteer Award presented by the Hampshire, Franklin and Hampden Agricultural Society. Bushey serves on the Three County Fair board of directors and is a longtime fair volunteer. She is treasurer of the Greater Northampton St. Patrick’s Committee and also volunteers in many events for the committee. She also volunteers at the Hampshire County Sherriff’s picnic and has volunteered during the Northampton Family Fourth event at Look Memorial Park. Florence Bank also recently presented its 2022 President’s Award to three staff members for outstanding service. Established in 1995, the President’s Award recognizes outstanding performance, customer service, and overall contribution to Florence Bank. Honorees are nominated by their colleagues at the bank. This year’s award winners are Tiffany Poirier, commercial loan-support assistant manager in the Commercial Department; Shaina Snape, a customer-service specialist in the Customer Service Center; and Nicholas Andrus, a customer-service representative. All three employees work in the bank’s main branch in Florence. Poirier was hired at the bank in March 2017. She holds a bachelor’s degree in business administration from Westfield State University and has 15 years of banking experience. Snape began working at Florence Bank in 2018 and has 12 years of banking experience. Andrus was also hired in 2018 and has eight years of experience in banking. The board of directors of the Northern Berkshire United Way (NBUW) announced the appointment of Duffy Judge as its new executive director. Judge has filled the role of interim executive director since March, following the vacancy created by Christa Collier when she departed for a position with the Massachusetts Children’s Alliance. Judge has taken the lead on a number of important community initiatives and is committed to following the mission, vision, and values of the agency. He has made a strong commitment to the agency’s board of directors and staff, allowing NBUW to continue serving the Northern Berkshire community. Judge came to NBUW from Berkshire United Way in Pittsfield, where he served as Development manager since July 2017.