The Era of Urgent Care 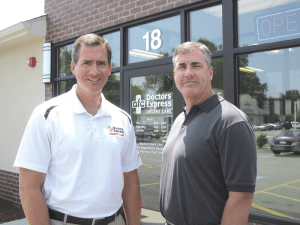 Rick Crews, left, with partner Jim Brennan, says there are many reasons — from affordability to its ability to save individuals time and aggravation — why urgent care has become so popular.

Rick Crews has been heralding the benefits of urgent care since he and Jim Brennan opened their first afc Doctors Express practice five years ago.

“We’re treating many people who traditionally used to go to the ER — but a lot of that was not appropriate,” he said of patients whose illness or injury didn’t rise to the level of an emergency, yet had no access to primary care.

“This is an alternative — a place you can go with really high-quality care that’s much more affordable, and get that care in a more timely fashion. That’s why urgent care is so successful right now.

“Hospitals need to concentrate on doing what they do best — the sicker patients, the more labor-intensive patients,” he continued, adding that patients who crowd the ER with less pressing matters cause a backlog, which elevates waiting times and frustration levels for everyone. Several area hospitals have recently renovated and expanded their emergency departments, but Crews said that’s not always the answer.

“I think we’ve provided relief for the hospital so they don’t have to build a new facility, and we’ve provided an outlet for patients, who can be seen for something in a much quicker fashion.”

If it sounds like hospitals consider afc Doctors Express and other urgent-care facilities a competitive threat, think again. In fact, hospitals are increasingly opening urgent-care clinics of their own to provide a level of care between the doctor’s office and the ER, with hours that often extend well into evenings and weekends, unlike the typical primary-care practice.

In some cases, hospitals are even teaming up with urgent-care practices, as evidenced by the recently announced affiliation between Boston-area afc Doctors Express franchises and Steward Health Care, a network of 11 hospitals and other facilities.

“The way our affiliation is set up is really cool,” Crews told BusinessWest. “When a patient walks in the door, we ask them, ‘do you have a primary-care provider?’ If they say ‘no’, we will refer them to primary-care physicians with the Steward group. And their family-practice physicians will refer their patients to afc Doctors Express after hours and weekends for urgent-care needs.”

Through the affiliation, 45 family-practice, emergency-medicine, and internal-medicine physicians employed by afc Doctors Express will join the Steward Health Care Network, and afc Doctors Express physicians will have access to Steward’s patient portal to evaluate a patient’s clinical history prior to commencing treatment. Clinical notes from an urgent-care visit will be communicated back to a patient’s primary-care physician or specialist for necessary follow-up.

“The hospitals are embracing urgent care; they see it as a great thing,” said Dr. Richard Freniere, co-owner, Urgent Care of Wilbraham, which opened last year. “We really have some good relationships with both Baystate and Mercy, open communications with doctors and emergency rooms in both hospitals.”

The pair know something about hospital ERs, since they’re both employees in the Wing Memorial Hospital Emergeny Department in Palmer, although Freniere devotes the bulk of his time these days to the Wilbraham facility.

“Baystate opened up an urgent care; they see the value of it,” Freniere said, citing just one of the area’s hospital-affiliated practices. “But we’re starting to see other competition coming in — little mom-and-pops, with one doctor, taking a shot at urgent care.”

According to the New York Times, the proliferation of those tiny practices makes it difficult to determine the exact number of urgent-care facilities in operation, but the Urgent Care Assoc. of America pegs the figure at around 9,000 — and growing.

The cost of urgent care, with its much lower co-pays than emergency care, also appeals to patients — not to mention commercial insurers. By any measure, Freniere said, Wilbraham Urgent Care has been a success.

“We definitely way exceeded our one-year expectation. We are basically at our max volume right now. For the size of the facility we have, I really don’t want to burden the system any more than we do. If we go much more than this, we’ll have what happened in hospitals, getting too many people, and we won’t be able to provide what we set out to do in the first place.”

And seeing patients quickly is a hallmark of urgent-care clinics, with wait times typically averaging a half-hour or less, compared with several hours at some hospital ERs. So is time flexibility; according to the American Academy of Urgent Care Medicine (AAUCM), only 29% of primary-care doctors offer after-hours coverage, but urgent-care practices are generally open evenings and weekends, with some offering around-the-clock care. 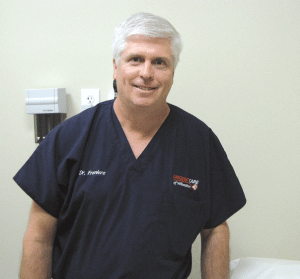 Dr. Richard Freniere says hospitals are embracing urgent care, rather than viewing it as a threat, because it enables them to focus on what they do best.

That’s a relief for patients who would rather not deal with the emergency room to have a minor injury or illness treated. According to the AAUCM, the number of emergency-room visits increased by more than 1 million per year between 1994 and 2004, while the number of hospitals and ERs decreased by 9%.

Today, emergency departments handle 110 visits annually, and many are clearly not emergencies. A 2009 RAND Corp. study reported that up to 27% of ER visits could be easily handled by urgent-care centers or retail clinics, saving up to $4.4 billion per year in health costs.

“We’ve all experienced the five-hour wait at the ER — it’s not good,” Crews said. “We’ve all experienced those long waits and frustration in crowded ERs, so we are providing an alternative.” In fact, across the four practices he and Brennan own and six others for which they are master franchisees, patients’ average door-to-door time last year was 49 minutes.

Freniere agreed. “Being ER doctors for the past 20 years, we’ve seen all the people coming in and getting frustrated at times. And many of them really don’t need to be coming into the emergency department and incurring a high cost of care.”

The fact that a successful urgent-care practice can be very profitable isn’t lost on private-equity funds, which have purchased many urgent-care networks over the past few years. Insurance companies have also gotten into the ownership game. “Clearly there’s more competition now,” Freniere said.

Still, the Wilbraham practice has been such a success that the partners are preparing to open a second location in Worcester County. “And I’m not sure that’ll be the last place we do.”

Massachusetts is especially fertile ground for urgent care, said Freniere, because the Bay State lagged considerably behind much of the country in adopting the urgent-care model, although that’s clearly changing.

That change includes the attitude of hospitals, which increasingly see the value in this relatively recent model. “They’re saying, ‘hey, guys, we want to get you to work with us. You’re complementary to what we’re doing.

“Doctors are coming around too,” Freniere added. “Initially they saw us as competition, but now they see us as supplemental. We’re not out to take anyone’s patients from them. We’re helping to unburden the system, basically.”

Crews has seen that shift as well. “There’s been a lot of change over the past four or five years since Jim and I opened up our first one,” he said. On the national level, afc Doctors Express — which was recently purchased by American Family Care — will boast more than 160 sites by year end, and Crews and Brennan expect to increase their total from 10 to 18 by the end of 2015.

“We continue to grow every year as patient volumes increase,” Crews said. “It’s because we focus on providing an exceptional patient experience, great quality medical care, convenient hours, and low prices — all those things together.”

Since affiliating with Steward, he said the partners have been busy meeting with the system’s hospital presidents and talking strategy. “These hospitals out there are embracing us.”

As for Freniere, he said he has been contacted by a large urgent-care company, but has no plans to sell — in large part because he finds delivering healthcare in this way a gratifying experience.

“The way the model is set up, the way it’s working right now … it’s attracting attention,” he said. “I think it’s the future.” 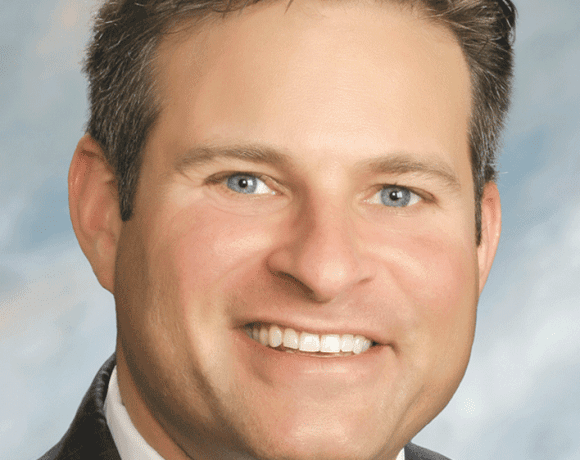