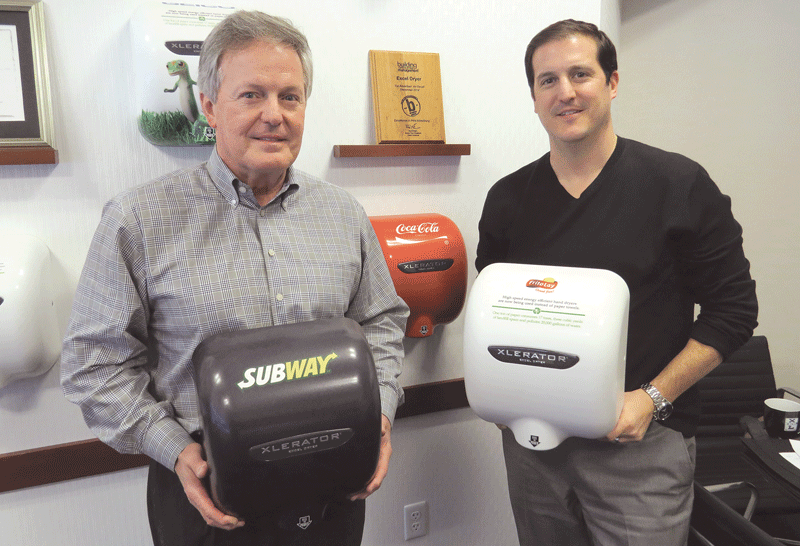 Denis (left) and Bill Gagnon show off XLERATOR models branded with company logos, one of the product’s aesthetic selling points.

If there’s one statistic that drives Excel Dryer, it’s this one: 85%.

That’s the percentage of commercial restrooms in the U.S. that eschew hand dryers for paper towels. That represents significant — and attainable — opportunities, said William Gagnon, vice president of marketing for the East Longmeadow-based company started by his father, Denis, in 1999. After all, when Excel launched its signature product, the XLERATOR, in 2001, that number was 90%. And it continues to shrink.

“Excel Dryer works with all commercial facilities because all businesses have restrooms,” he told BusinessWest, listing some segments that purchase the most hand dryers, including schools; the hospitality industry — including restaurants, hotels, resorts, casinos, and amusement parks — assembly areas like stadiums, convention centers, and concert venues; healthcare; government; retail stores; and transportation facilities like airports, DOTs, and public-transit centers. “We are very successful with all facilities that focus on saving time, money, and the environment.”

The challenge is educating people about the benefits of using high-speed, energy-efficient hand dryers, which improve the user experience compared to older dryers, he said, adding that the XLERATOR dries hands three times faster than conventional hand dryers.

But the education efforts are working, and so is word of mouth.

“Since this new category of hand dryers has become available, hand dryers have gained significant traction versus paper towels,” Gagnon said, citing a report from Dodge Data and Analytics that Excel Dryer products are now listed among the specifications in more than half of new commercial construction projects that include hand dryers. “This means that architects and interior designers working in the commercial-restroom field prefer Excel Dryer models to any others on the market.”

Indeed, the XLERATOR’s initial success — it burst onto the market with a 700% increase in sales between 2001 and 2008 — was no fluke; the company continues to record double-digit growth each year, and 2014 was the best year in Excel’s history.

In fact, Gagnon says Excel has done nothing less than revolutionize the hand-dryer industry, changing the environment in commercial restrooms in more ways than one.

Environmental concerns are, in fact, at the top of Excel’s marketing strategy, but Gagnon said it’s fighting a messaging war with paper-towel manufacturers.

“The paper industry also likes to say that paper towels are more sanitary,” he went on, “but independent, third-party studies from leading academic and research organizations debunk this myth time and time again.”

He cited a study from the Mayo Clinic that found no difference between paper towels and hand dryers in removing bacteria from washed hands. However, another study published in the American Journal of Infection Control found 17 species of bacteria on unused, recycled paper towels, and noted that this may have implications in industrial and clinical settings, like hospitals, which house immunocompromised individuals. “When a leading publication about infection control warns against using paper towels in healthcare settings,” Gagnon said, “that’s a pretty strong statement.”

“It offers all the same features and benefits of the original XLERATOR hand dryer, except for the heating element,” he explained. “This hand dryer significantly reduces energy consumption and is the best choice for facilities looking to reduce costs and energy usage.” He added that it’s also an attractive choice for facilities in warmer climates where the heating element is not as beneficial.

Even the original XLERATOR, because it dries hands so quickly, uses 80% less energy than conventional hand dryers, Gagnon said, and provide a 95% cost savings versus paper towels, once the initial cost of installation is recouped — typically, within one year. Add it up, and the Excel team believes it has a winning formula for continued growth, and not just domestically.

“Approximately 25% to 30% percent of our sales are exported outside of the United States, and we are experiencing tremendous growth in international markets,” he told BusinessWest. “For example, the European adoption rate of energy-efficient technology is significantly higher than here in the U.S. They have much stricter energy restrictions and less room in landfills for waste, so high-speed, energy-efficient hand-dryer technology is much more prevalent there.”

In fact, he added, the ratio of hand dryers to paper towels in commercial restrooms in Europe is three to one, a stark reversal of the U.S. model. “As awareness for energy conservation increases, environmentally friendly, energy-efficient hand-dryer adoption rates will increase on a global scale. The United States is not as far down the path of adopting sustainable solutions, but the demand in European markets is a good indication that energy-efficient technology is the way of the future.”

At the same time, Gagnon said, Excel has managed to keep its manufacturing base in East Longmeadow, using Kaizen Cell procedures to become more efficient instead of cutting costs by moving operations overseas, like others in its industry have done. In doing so, Excel continues to add manufacturing jobs locally.

On the aesthetic side, the device’s custom digital image covers can feature corporate colors, logos, images, and taglines. “You can see our custom covers here locally at the Naismith Memorial Basketball Hall of Fame and all across the globe,” Gagnon noted.

“Big brands like Starbucks, Dunkin Donuts, Coca-Cola, and even the New England Patriots have them in Gillette Stadium,” he added. “It’s great to see companies support sustainable solutions and co-brand the XLERATOR hand-dryer models with their unique style. It says a lot when an organization like the Patriots believes in your brand enough to put their logo on your product.”

The covers can also feature sustainable messaging, including statistics from the EPA, explaining why hand dryers are a better choice for the environment than paper towels, Gagnon said, adding that customers have increasingly come to appreciate the green appeal of the product.

In fact, Excel is the first hand-dryer company to become affiliated with the U.S. Green Building Council (USGBC), which hosts the largest green-building trade show, and is the force behind LEED (Leadership in Energy and Environmental Design) certification for environmentally friendly buildings. “We don’t just talk the talk; we walk the walk,” Gagnon added. “Our latest Excel Dryer corporate office expansion was LEED Gold-certified.”

In addition, the company touts its membership in the Green Building Initiative and the Sustainable Buildings Industry Council, and endorsements by the Green Restaurant and Green Hotels Assoc. and a listing on the GreenSpec guide to ecologically conscious building products.

“According to the EPA, one ton of paper towels requires 17 trees, pollutes 7,000 gallons of water, and takes up 3.3 cubic yards of landfill space,” Gagnon noted. “This is just too taxing on our environment. We need to find better, sustainable solutions. Going green is no longer just a movement; it’s becoming the expectation, and we are proud to be a catalyst for positive change.”

In addition, Excel is an original seed sponsor of the Green Apple Day of Service, a program of Green Apple, a cause-marketing initiative of the USGBC Center for Green Schools.

“Three years ago, they launched a national day of service, challenging school officials to improve education facilities and promote a safer, healthier, and more sustainable place to learn,” he explained, adding that Excel has participated each year by donating custom-covered Green Apple XLERATOR hand dryers to schools around the world. The Green Apple dryers are available for any facility to purchase, and a part of the proceeds goes back to support the Green Apple initiative. The next day of service is scheduled for Sept. 25.

“As awareness of green industry has grown, so has our business,” he said, “and we look forward to continue partnering with green-industry thought leaders and organizations to continue building momentum.”

To that end, Gagnon anticipates sharing more developments in the coming year, from a hand-dryer model compliant with the Americans with Disabilities Act to a new, integrated sink system that features the latest XLERATOR technology.

“We continue to focus on innovative solutions for the industry,” he told BusinessWest. And with so many commercial spaces still dependent on paper, he knows there are plenty of minds left to change.

Setting Their Sites Near and Far