Announcing the 12th Annual Cohort of 40 Under Forty Honorees 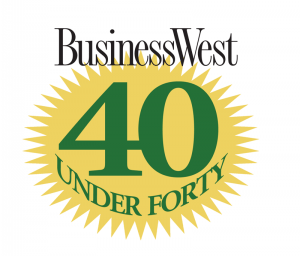 We were right. In fact, 40 Under Forty has become such a coveted honor in the region’s business community that the flow has turned into a flood, with more than 180 unique nominations arriving this year, making the job of five independent judges tougher than ever.

They did their job well, however, as you’ll find while reading through the profiles on the coming pages. The format is a bit different this year — instead of being interviewed, the winners were free to craft and write out their own thoughts — but, collectively, they speak of a wave of young talent that is only getting larger during what can only be described as an economic renaissance in Western Mass.

As usual, they hail from a host of different industries, from law to banking; from education to healthcare; from media to retail, just to name a few. Many are advancing the work of long-established businesses, while others, with an entrepreneurial bent, created their own opportunities instead of waiting for them to emerge.

But there are, as always, some common denominators, including excellence within one’s profession, a commitment to giving back to the community, dedication to family and work/life balance, and a focus on what else they do in each of those realms.

The class of 2018 will be celebrated at the annual 40 Under Forty Gala on Thursday, June 21 at the Log Cabin Banquet & Meeting House in Holyoke. A limited number of tables are available, and a number of individual seats and standing-room-only tickets are available as well — but they will sell out quickly.

The gala will also feature the announcement of the winner of the fourth annual Continued Excellence Award, a recognition program that salutes the 40 Under Forty honoree who has most impressively added to their résumé of accomplishments in the workplace and within the community, as chosen by a panel of judges. Nominations are still being accepted through Monday, May 14 at businesswest.com/40-under-forty-continued-excellence-award.

Speaking of judges, we thank those who scored the more than 180 nominations for this year’s 40 Under Forty competition (their story HERE). They are:

Photography for this special section by Leah Martin Photography