EASTHAMPTON —  CitySpace launched its application for Pay It Forward, a pilot program for artists who live in Hampden, Hampshire, and Franklin counties. The program provides free venue access to CitySpace’s Blue Room, a performance and incubator space located in Old Town Hall in Easthampton. Applicants may apply at cityspaceeasthampton.org/pif through Friday, April 1 at 11:59 p.m.

CitySpace’s introductory program, Pay it Forward, invites artists of all kinds for short-term residencies and venue access for public performances and events. In addition, artists will receive a $500 payment for a public performance or event hosted in the Blue Room. Further, recipients will have access to artist-tailored workshops, peer-learning cohorts, or one-on-one coaching to deepen their practice, build new skills and relationships, and explore new ideas.

Pay it Forward is open to all artists (musicians, performers, dancers, and multi-media, literary, and visual artists) who live in Hampden, Hampshire, or Franklin counties. Priority will be given to artists who identify as BIPOC (black, indigenous, and people of color) and economically disadvantaged artists.

The Pay It Forward pilot is made possible by funding from the Community Foundation of Western Massachusetts and the Massachusetts Cultural Council. 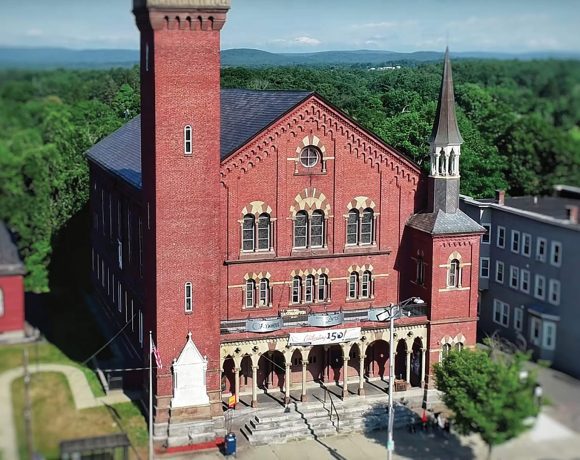 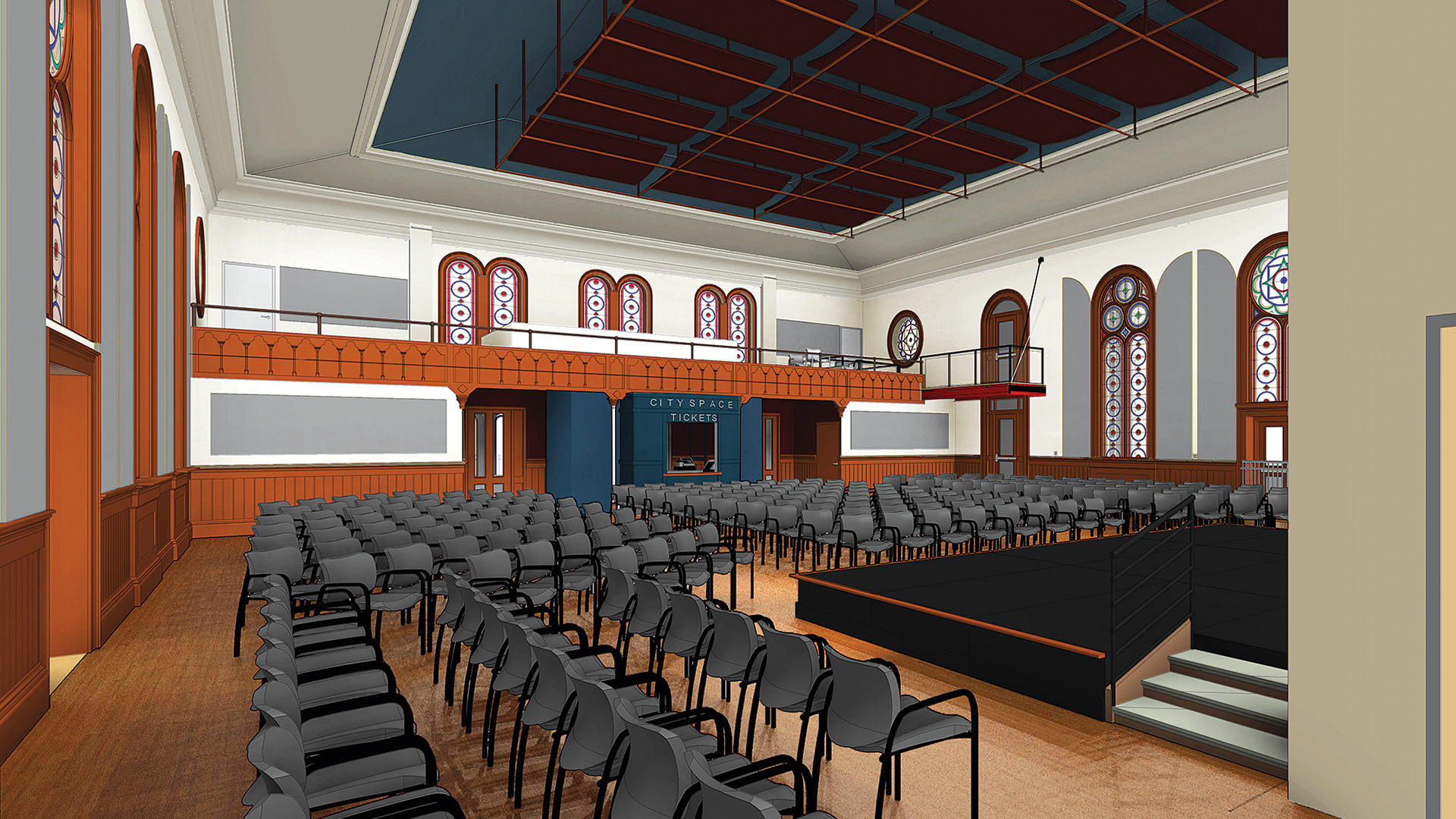 An architectural rendering from Kuhn Riddle Architects of the second-floor performing-arts and community space at Old Town Hall.

With the financial support from the Massachusetts Cultural Council Cultural Facilities Fund and the Easthampton Community Preservation Act, CitySpace is beginning the first phase of a multi-million-dollar project to restore Easthampton Old Town Hall, the majestic brick building centrally located in the city’s downtown, as a center for the arts.

The $511,000 first phase, a portion of the total $6.9 million restoration, will prepare the building’s air systems for energy-efficient use, add new HVAC systems, and upgrade the historic building’s electrical system. Phasing the project will provide system upgrades and prepare the building for its next phase: completing the renovation of a 3500-square-foot, 350-seat arts and entertainment venue equipped with theatrical lighting, sound and projection systems, flexible staging and seating, and full accessibility.

“This is not a new project; it’s something we’ve been talking about for a long time. I consider it the single most important, impactful project this city has going forward for economic development … I’m excited that we are starting it,” Easthampton City Councilor Dan Rist said at a Community Preservation Act Committee meeting in November. The committee and Easthampton’s City Council unanimously voted to push forward $255,576 of reserved funding.

“This is not a new project; it’s something we’ve been talking about for a long time. I consider it the single most important, impactful project this city has going forward for economic development … I’m excited that we are starting it.”

CitySpace originally intended to build the $6.9 million project in one stage. However, this past summer, the organization explored the option of phasing the building project with the help of Kuhn Riddle Architects of Amherst, and found that dividing the scope of work was feasible. Other than the addition of an energy-recovery ventilator, the infrastructure improvements entirely reflect the established 2018 architectural plans created for the rehabilitation project.

In 2019, CitySpace was awarded $200,000 from the Massachusetts Cultural Council through its Cultural Facilities Fund in support of the restoration of the Old Town Hall. In collaboration with MassDevelopment, the Cultural Facilities Fund provides important funding for capital projects of creative spaces, “in recognition of their profound economic impact on communities across Massachusetts,” according to the council’s website. These funds will go toward this project located in Easthampton’s Main Street corridor, with an expected ripple effect to the region’s businesses.

“The incomparable support of the Massachusetts Cultural Council, MassDevelopment, the Easthampton Community Preservation Act Committee, and the generosity of our Western Massachusetts friends, neighbors, and businesses is why we are able to make these infrastructure improvements,” said Burns Maxey, president of the board of CitySpace. “This project will have extraordinary impacts on our economy while providing affordability and access to space for the arts and people in our region. I am so thrilled to see this project begin.” 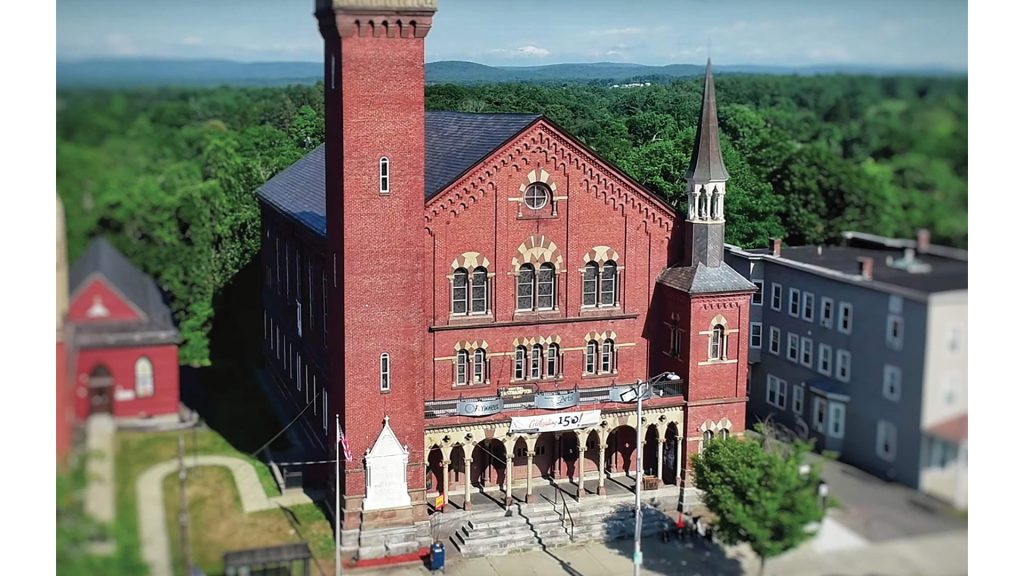 To date, more than $4 million in grants and contributions have been received for the $6.9 million project. Most recently, the Mabel Louise Riley Foundation awarded CitySpace $100,000 in support of the project’s second phase, creating the 350-seat space for performances, concerts, and community events. Besides seating, lighting, and sound, renovations also will include a new box office, elevator, and entryway. CitySpace is seeking further support for the project and has naming opportunities available.

“As we embark on this year, momentum is building to complete this campaign,” Maxey said. “The incredible support from the Mabel Louise Riley Foundation is a windfall for CitySpace and our upcoming plans for Old Town Hall. We are so very thankful.”

CitySpace is a nonprofit that serves to restore, preserve, and manage Easthampton Old Town Hall as a center for the arts. Old Town Hall was built in 1869.

EASTHAMPTON — Finck and Perras Insurance donated $15,000 to CitySpace in a multi-year pledge for support of the restoration of Easthampton Old Town Hall into a center of the arts for Western Mass.

In 2006, beginning with Old Town Hall’s first floor, CitySpace embarked on an effort to create affordable space for arts organizations and creative businesses under one roof in Easthampton’s Main Street Historic District. Now, CitySpace is raising funds to convert the unused second-floor, 3500-square-foot hall into a flexible, accessible, 350-seat space for performances, concerts, and community events. Renovations also will include a new box office, elevator, entryway, theatrical lighting, and sound and projection systems.

“I have always viewed Old Town Hall as a centerpiece of the city,” said Gen Brough, Finck and Perras president. “For over 85 years, Finck and Perras Insurance has been a proud member of this community. Being a part of the community and giving back to it is one of the core philosophies we feel is essential to our success. Sponsoring youth sports, supporting nonprofits, volunteering at community events, or projects like CitySpace’s Old Town Hall restoration makes us feel even more connected.”

To date, more than $4.2 million in grants and contributions have been received for the $6.9 million project. CitySpace plans to begin renovations in late 2022 and seeks further support for the project.

“CitySpace’s project to bring the Old Town Hall back to its glory of a usable community space for everyone fits in with our values of community support,” Brough added. “We are proud to make a donation and look forward to the grand reopening of this great historical icon of the city of Easthampton.”

EASTHAMPTON — The Beveridge Family Foundation awarded CitySpace $35,000 in support of the restoration of Old Town Hall into a center of the arts for the city of Easthampton and Western Mass.

In 2006, beginning with Old Town Hall’s first floor, CitySpace embarked on an effort to create affordable space for arts organizations and creative businesses under one roof in Easthampton’s Main Street Historic District. Now, CitySpace is raising funds to convert the unused, second-floor, 3500-square-foot hall into a flexible, accessible, 350-seat performing-arts and community space for performances, concerts, and community events. Renovations will include a new box office, elevator, entryway, theatrical lighting, and sound and projection systems.

To date, more than $4 million in grants and contributions have been received for the $6.9 million project. CitySpace plans to begin renovations in late 2022, and the organization seeks further support to complete the project.

“From the beginning of our campaign, the Beveridge Foundation has been incredibly generous and encouraging of CitySpace for the restoration of Old Town Hall,” said Burns Maxey, CitySpace board president. “We are deeply thankful and honored for the foundation’s growing support to create a vibrant destination for the performing arts for our Western Massachusetts community.”

EASTHAMPTON — CitySpace announced that Andrea Kunst will fill the role of capital campaign manager for the organization, and will guide the Transformation Campaign, a project to restore and create a flexible performing-arts and community space in Easthampton’s Old Town Hall.

“My interest was piqued for this position because the Transformation Campaign is an important project in a great community, and allows me to use a career’s worth of experience to help achieve the goal of an enduring renovated arts and performance space,” she said.

After being introduced to the field of development at a Jesuit middle school in Jamaica Plain, Kunst found her calling and has continued to support organizations with strong missions of meeting community needs. Prior to retiring from Boston public schools, she spent a decade as the director of Advancement for a competency-based alternative high school in Roxbury.

With a last name that translates to ‘art’ in German, she has worked extensively in many creative fields, including writing columns for Boston magazine, teaching technical writing at Boston Architectural Center, managing a jazz club in Cambridge, and serving as board chair for Dorchester Arts Collaborative during its successful opening of Dorchester’s first community art gallery.

In 2016, Kunst began Cushing Mill, a contracting company for schools and nonprofits in need of advancement services. In that role, she has worked for the Center for Health and Food Law Policy at Harvard University, Fields Corner Main Street in Dorchester, All Dorchester Sports and Leadership; Boston Green Academy in Brighton, and Boston Farms Community Land Trust. She received both her bachelor’s and master’s degrees in communications from Emerson College.