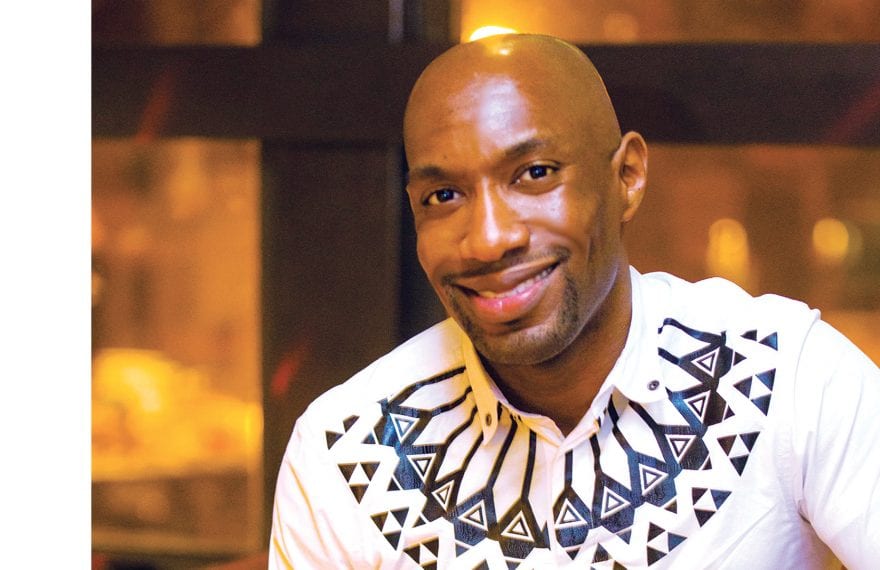 For This Photographer and Sock Maker, the Pandemic Is a Developing Story 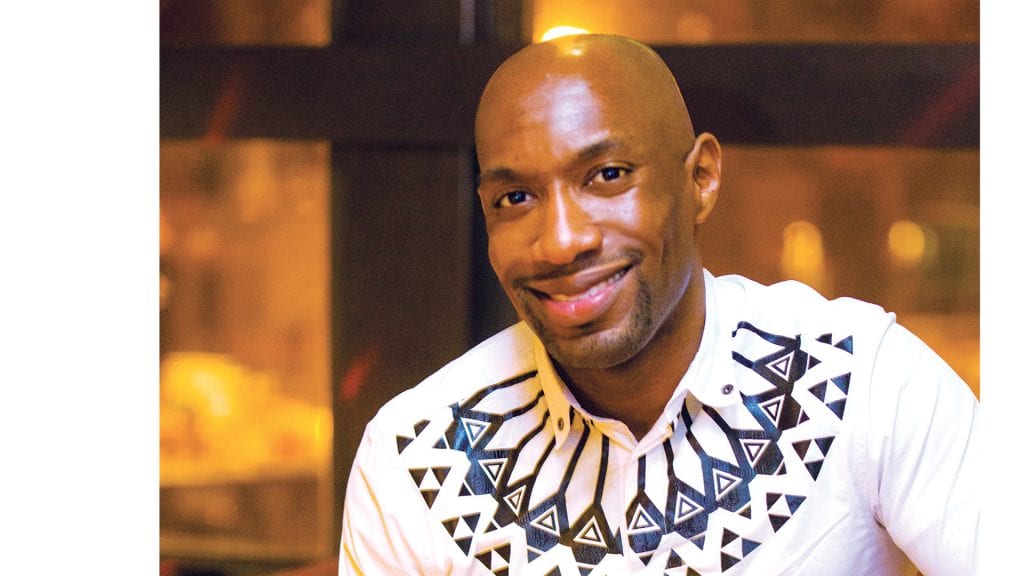 Lenny Underwood says both his photo studio and sock business have been greatly impacted by the pandemic.

Lenny Underwood started off by talking about how the COVID-19 pandemic has put a huge dent in both his businesses — a photography studio and an intriguing venture called Upscale Socks, which has become one of the many intriguing stories of entrepreneurship being written in the region. But then he put those losses into their proper context by changing the subject to his grandmother.

“She died from this virus,” he said slowly and deliberately for additional emphasis, as if it were needed. “Her name was Queeie Brown, and she died late last month [April] — it was awful.”

So Underwood, a member of BusinessWest’s recently announced 40 Under Forty class of 2020 — honored for his entrepreneurial exploits as well as his work within the community, such as donations of socks to area groups — has seen the virus alter his life in probably every way imaginable. Right down to his socks.

His designer socks, a venture he started dreaming about in 2014, became a reality the following year. He now has several dozen styles, including a popular ‘Springfield Firsts’ sock that came out last year and continues to draw orders. The products are manufactured by a partner in China, said Underwood, adding that production had to be halted for a time earlier this year when the virus was spreading through that country.

But as this year has progressed, that setback has turned out to be just one of many ways the pandemic has changed the landscape for Underwood — and perhaps one of the more minor ones.

Indeed, like most all photographers, Underwood has seen the virus rob him of a number of jobs and reliable revenue streams — everything from proms to weddings to family gatherings.

“Most of my photography is event-based, but I do some head shots and senior portraits as well,” he told BusinessWest. “Mainly, though, I’m on the scene, on location for different celebrations.”

And there certainly haven’t been many of those over the past three months, and those that have been staged have been smaller and decidedly different, he went on; after searching his memory bank, he determined that the last event he worked was the second Saturday in March.

The following Tuesday, he recalls getting seven cancellations for jobs that day alone. “I was looking forward to four proms, a lot of graduations, and weddings,” he went on, adding that he has one wedding still scheduled for late in July — and he’s somewhat dubious about that — but everything else has been wiped off the calendar.

Overall, he estimates that business is off 65% to 70% from what it was a year ago, a precipitous decline that has forced to him to seek — and eventually receive — unemployment benefits. However, they are due to run out in 20 weeks. He has also applied for a number of grants through various agencies, and is awaiting word on whether he’ll receive any.

Underwood has managed to find some work — a few of those ‘parade birthdays,’ for example, a photo shoot for a newborn, a few ‘senior-announcement photos,’ as he called them — where soon-to-be high-school grads announce where they’ll be going to college — and some other scattered assignments.

Meanwhile, the virus has generated some needed, but somewhat macabre work. Indeed, there has been a noted increase in funerals across the area, and for some of them, Underwood has been hired by families to scan photos of the deceased for slideshows and memorial tributes.

Still, like most photographers, he has seen his business devastated by the virus and doesn’t have any real idea when things might start turning around.

As for his socks … he’s still getting orders — someone recently purchased 20 pairs of the ‘Springfield Firsts’ style, for example — and some specials he’s been running have helped to generate more of them. But overall sales volume is down because he’s not able to sell them at large events, which generated a good deal of sales prior to the pandemic. Overall, sock sales are down by roughly 50%.

As he talked with BusinessWest near the tail end of May, Underwood said he had a few events on the books — an outdoor church service, for example. But the longer view is clouded by uncertainty and some doubts about whether the large events that have become his livelihood will be staged any time soon.

For now, he’s maintaining his focus and looking for opportunities whenever and wherever he can find. For him, the pandemic is a developing story — in all kinds of ways. u

Underwood has owned Underwood Photography for 15 years and Upscale Socks for three years. Through his charity work with Upscale Socks, 220 pairs of socks were donated to Springfield elementary schools, and 150 pairs were donated to Square One. He also established a $500 scholarship for a student at Springfield Central High School. Meanwhile, Underwood has received several awards, including the 2019 Game Changer Award from the Springfield Thunderbirds, the 2019 Changemaker Award from Martin Luther King Jr. Family Services, and the 2017 100 Men of Color Award in Hartford, Conn. He is a deacon at St. John’s Congregational Church, a board member with Way Finders, and serves on the Brianna Fund for Children with Physical Disabilities steering committee and the Love Fusion Singles & Couples Conference planning committee. 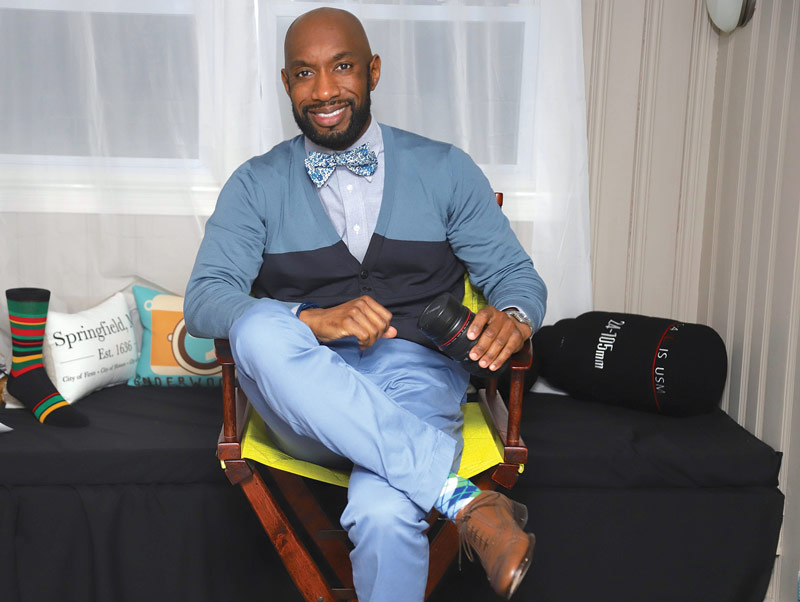 What did you want to be when you grew up? An attorney — until I worked in the litigation department one summer at MassMutual as a 10th-grader. It was an eye-opening experience that made me rethink my life plans.

What’s been your biggest professional accomplishment so far in your career? Recently, I have been invited to guest speak in various spaces, judge competitions, offer consultation to aspiring small businesses, receive prestigious awards (like this one), and also compete and win on Wheel of Fortune with my friend in 2018.

What are you passionate about? Health and wellness. In addition to my businesses, I am also a certified personal trainer.

What do you do for fun? In my photography business, I have the priviliege to work at many fun events over the course of the week. There is usually great food, great people, and great music!

How do you relieve stress? Prayer and meditation, exercising, and, recently the sauna.

What person, past or present, would you like to have lunch with, and why? Probably Dr. Martin Luther King Jr. He accomplished so much at such a young age, and he is still widely celebrated across the world. 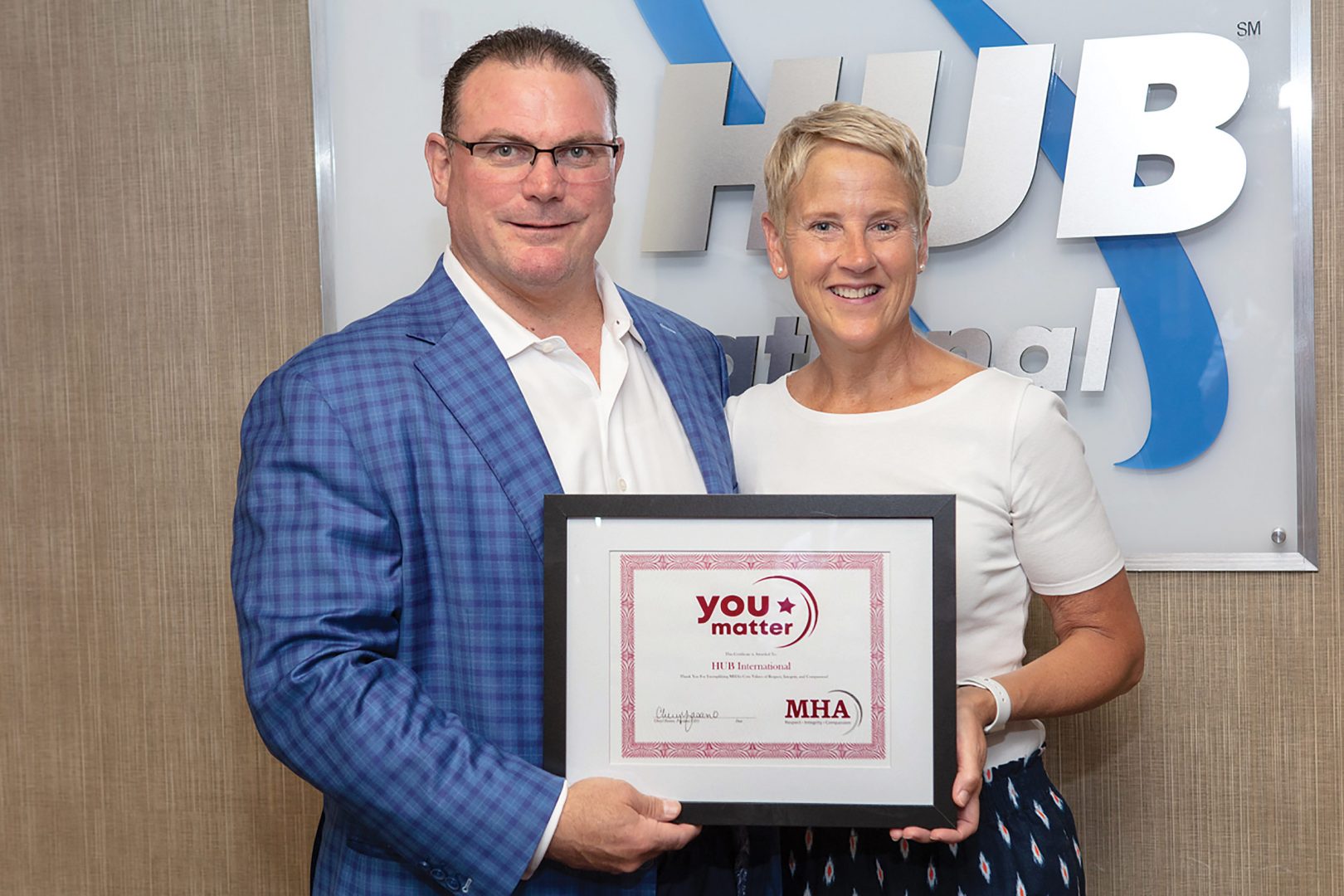 Timm Marini, president of HUB International New England, recently presented a check for $5,000 to the Mental Health Assoc. (MHA). Marini has also committed to a $5,000 donation to MHA for 2020. “HUB International New England embraces the value of the communities where our customers and employees live and work, so we give back by supporting community-focused organizations that do good things to help others. MHA is an organization that we have supported for many years and continue to support because of the important work they do helping vulnerable people,” said Marini (pictured with Kimberley Lee, vice president, Resource Development & Branding for MHA). 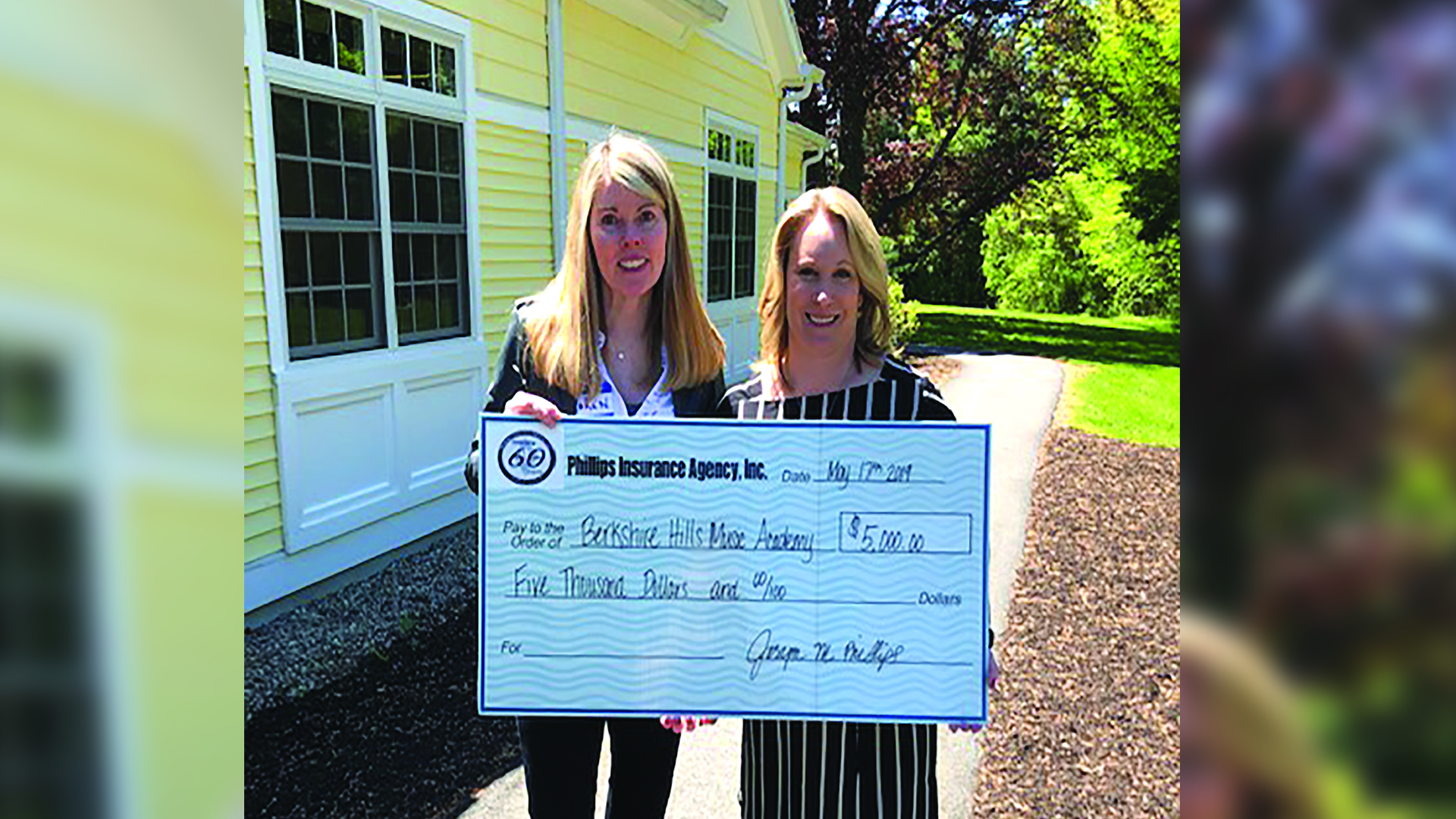 Music to Their Ears

Phillips Insurance Agency Inc. recently donated $5,000 to the Berkshire Hills Music Academy (BHMA) in South Hadley, which offers a post-secondary transition program, as well as a long-term graduate program for young adults with intellectual challenges. Its educational model infuses music with an empirically based curriculum to promote skills for independence. Karen Phillips of Phillips Insurance (left) presented the check to Michelle Theroux, executive director of Berkshire Hills Music Academy, at the annual spring concert held at the Bernon Music Center on the BHMA campus. 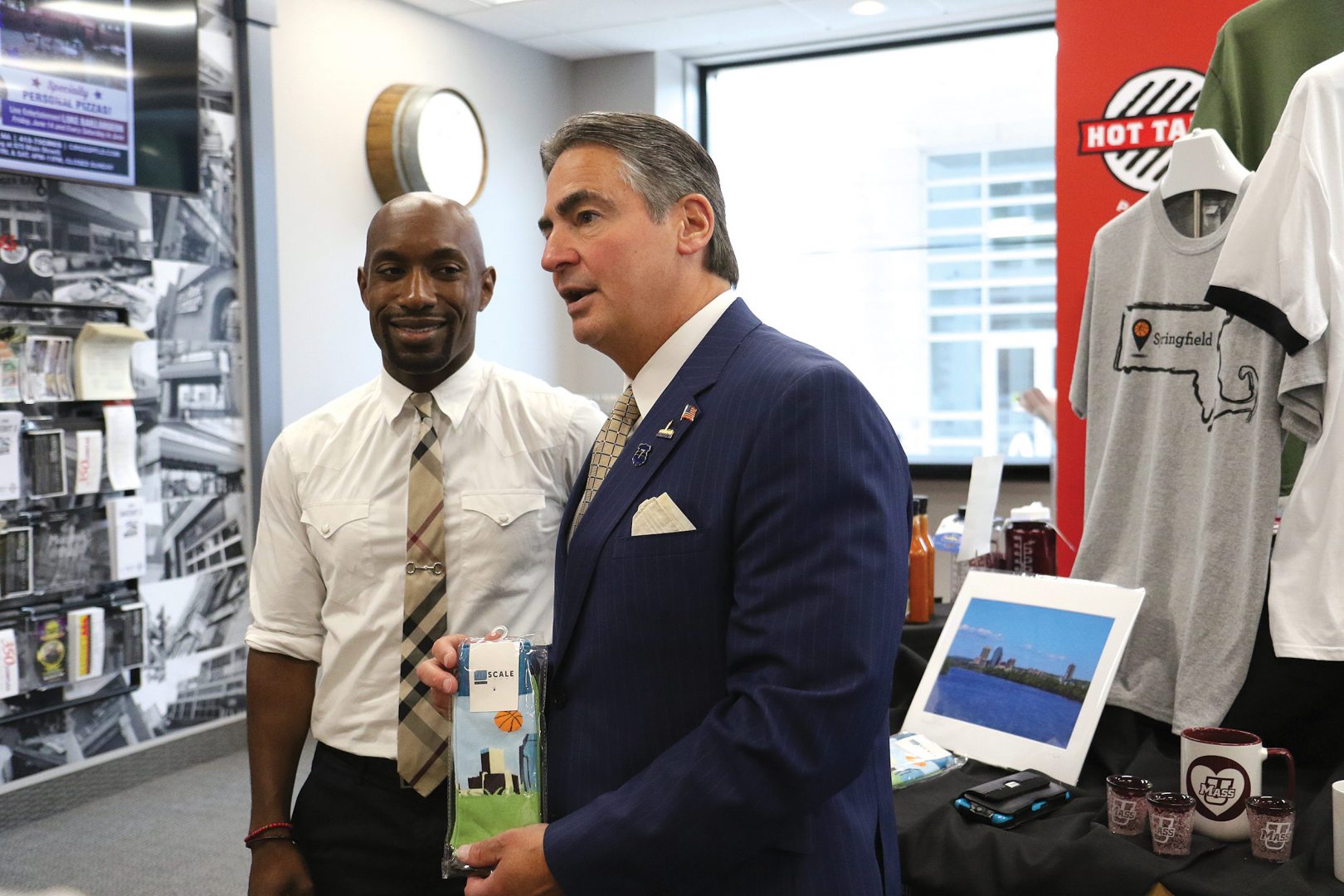 Springfield Mayor Domenic Sarno showed his support for Upscale Socks owner Lenny Underwood recently, and bought the first pair of his ‘City of First’ socks, depicting the city skyline and a basketball, representing the Naismith Memorial Basketball Hall of Fame. The socks can be purchased online at www.upscalesocks.com, as well as the Springfield Regional Visitors Center located at 1319 Main St.